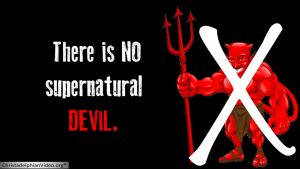 The Bible does not support the commonly held belief that Satan, otherwise referred to as the devil, is a fallen angel who, supported by other evil spirits, works to alienate man from God.

The Bible does speak of Satan and the devil as though they are beings. However, a careful reading of the whole of Scripture shows that either one specific person or a particular group of humans is being referred to, or a figure of speech is being employed, namely personification, in which a characteristic, a tendency or an idea is represented as a person.

The word ‘Satan’ appears in both the Old and the New Testaments of the Authorised Version of the Bible.

Thus the basic idea of the Hebrew word is that of an adversary, one who resists, opposes or withstands.

Examples of its use in the Old  Testament

1 Chronicles 21:1. “And Satan stood up against Israel, and provoked David to number Israel”. 2 Samuel 24 also records this event and shows that it was the Lord Who was angry with Israel and was acting as an adversary towards  them.

Job 1 and 2. In the Hebrew the definite article ‘the’ is associated with satan here, indicating that a particular or specific adversary is being spoken of. This is true also of Zechariah 3, where the adversary is ‘resisting’ (Heb. satan) the high priest because the high priest is behaving in an unseemly manner.

In the New Testament Satan appears 37 times, each time reflecting the Hebrew word found in the Old Testament, satan, and carries with it the same idea of an opposer or adversary. For example, Jesus spoke of Peter as Satan, or adversary, when Peter suggested Jesus should not go to Jerusalem (Mt. 16:21-23). He was opposing the declared intention of Jesus.

In Acts 5 Peter used the same idea in talking to Ananias when he said: “why hath Satan filled thine heart . . . ?” (v. 3). The next verse shows it was in fact Ananias who was being an adversary to himself, preventing himself from doing what he had declared: “why hast thou conceived this thing in thine  heart?”.

There is no specific reference to ‘the devil’ at all in the Old Testament. The word ‘devils’ appears four times. Twice it is translated from a Hebrew word which on 51 other occasions is translated ‘goat[s]’ or ‘kid[s]’. On the other two occasions it comes from a word with the basic meaning of ‘to ruin’ or ‘to spoil’. Thus there is no direct reference in the Old Testament to the devil who is supposed to be a supernatural being in opposition to God.

There are 45 references in the New Testament to ‘the devil’. Twelve of these are translations of a group of words (daimonion, daim¯on, daimonizomai) used to describe mental illness or false gods. The rest are translations of the Greek word diabolos, which is also translated ‘false accusers’ (twice) and ‘slanderers’  (once).

That personification is being used in the case of these terms is suggested by the comparison to be found in the following selection of   verses:

In these passages “the devil”, “the wicked one” and “the evil one” stand for sin, or for that inclination in individuals and in society to disobey or act in a manner which, like Eve, doubts God’s Word, accuses Him of misrepresentation, and chooses to behave in such a way as to malign His character and His principles or to treat Him as irrelevant or non-existent.