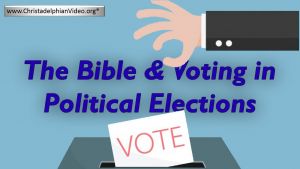 THE CHRISTIAN AND POLITICS

“Thou hast created all things, and for Thy pleasure they are and were created” (Rev. 4:11);

Politics is to do with rulership and is seen in various forms. In reality God overrules things that men and women intend to do when they are against His declared will, so that His purpose is achieved.

Bible teaching is clear: God is in control. The developments that take place in the world and in nations are according to His will. They will result ultimately in the Kingdom of God on earth, for He “hath made of one blood all nations of men for to dwell on all the face of the earth, and hath determined the times before appointed, and the bounds of their habitation . . . And . . . He hath appointed a day, in the which He will judge the world in righteousness by that man whom He hath ordained [Jesus] . . .” (Acts 17:26-31).

The role of the Christian is clearly laid out as being that of a stranger (an alien)—that is, one with no political rights—and a pilgrim, who is travelling to another land and a Kingdom that is yet to be manifested on the earth. Consequently, the believer should have no roots in the present order, and, apart from desiring freedom to serve God, has no concern about who runs the country in which he or she resides. Neither does the Christian participate in the processes of democracy to select a new government, nor in political protest against the existing arrangements.

It is God’s world

To Nebuchadnezzar, the despot over the kingdom of men in Daniel’s time, God said that he would be humbled, “to the intent that the living may know that the most High ruleth in the kingdom of men, and giveth it to whomsoever He will, and setteth up over it the basest [lowliest] of men” (Dan. 4:17). This lowliest of men will be Jesus as King in the Kingdom of God. Following his madness Nebuchadnezzar acknowledged the supreme position of God over the world of men: “He doeth according to His will in the army of heaven, and among the inhabitants of the earth: and none can stay His hand, or say unto Him, What doest Thou? . . . The King of heaven, all Whose works are truth, and His ways judgment: and those that walk in pride He is able to abase” (vv. 35-37).

Jesus calls believers to a new priority in their lives: “seek ye first the kingdom of God, and His righteousness” (Mt. 6:33). Response to this call will result in a person being called out of the Gentiles to be part of the “people for [God’s] name” (Acts 15:14) to become a member of the Commonwealth of Israel. This new allegiance requires believers to accept and follow new standards of behaviour patterned on Jesus’s teaching and example. He commanded: “Render therefore unto Caesar the things which are Caesar’s; and unto God the things that are God’s” (Mt. 22:21). This dual duty requires believers to obey the laws

of the country they live in and to pay taxes. The writer to the Hebrews highlights the example of the patriarchs, who “declare plainly that they seek a country” (11:14), for they “looked for a city which hath foundations, whose builder and maker is God” (v. 10). Also, for the Christian it can be said, “here have we no continuing city, but we seek one to come” (13:14); “For our citizenship [RV] is in heaven; from whence also we look for the Saviour, the Lord Jesus Christ” (Phil. 3:20).

Christian behaviour and the state

Because they are strangers and pilgrims looking for God’s new age to come, Christians cannot actively participate in the political processes of the country in which they live. Their role is one of obedience to, and compliance with, those in authority—unless required by them to break God’s laws. Although there is advice on how to live as a Christian in the world, significantly there are no instructions about behaviour in any roles to do with government, judging of social matters or putting right social injustice (1 Pet. 2:13-17, 21). Jesus’s example is very clearly not about claiming political rights but submitting to God’s will.

The advice of Jesus’s apostles on the Christian relationship to the state is: “I exhort therefore, that, first of all, supplications, prayers, intercessions, and giving of thanks, be made for all men; for kings, and for all that are in authority; that we may lead a quiet and peaceable life in all godliness and honesty. For this is good and acceptable in the sight of God our Saviour; Who will have all men to be saved, and to come unto the knowledge of the truth” (1 Tim. 2:1-4). The whole of Romans 13 advises believers on their behaviour towards the state and the political world. Paul says that the following should characterise believers:

Christians are committed to following Jesus. His example and teaching require them to seek first God’s Kingdom and righteousness. They therefore have no part in the ambitions of the state they happen to live in. They accept that God is ruling in the world and will allow political developments that they would not support themselves; and therefore they will abstain from supporting political groups by voting or by membership. A Christian’s vote has already been given to the Lord Jesus Christ as King, both in his or her personal life and on the Lord’s return to rule the world with a rod of iron to bring righteousness and peace. A Christian’s place now is one of submission to the state and its laws, after the example of Jesus:

“For the grace of God that bringeth salvation hath appeared to all men, teaching us that, denying ungodliness and worldly lusts, we should live soberly, righteously, and godly, in this present world; looking for that blessed hope, and the glorious appearing of the great God and our Saviour Jesus Christ; who gave himself for us, that he might redeem us from all iniquity, and purify unto himself a peculiar people, zealous of good works” (Tit. 2:11-14).

This leaflet is produced by The Testimony Magazine, 26 Tiercel Avenue, Norwich NR7 8JN,   to encourage personal and ecclesial study of Bible principles.  Further  copying  for distribution is encouraged.