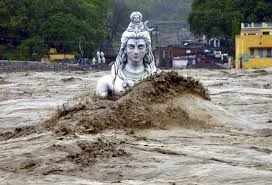 “And as it was in the days of Noe, so shall it be also in the days of the Son of man. They did eat, they drank, they married wives, they were given in marriage, until the day that Noe entered into the ark, and the ﬂood came, and destroyed them all” (Lk.   17:26,27).

The Bible always speaks of the Flood as a real historical event, which has lessons for suc- ceeding generations. It was a dramatic Divine judgement on a totally godless, wicked world. Noah’s contemporary world is described thus:

There are references in ancient literature to a ﬂood which destroyed all human life except one man and his family, the best known being the Babylonian Gilgamesh   Epic.

The Divine judgement destroyed the world of Noah’s day completely. God promised it: “behold, I, even I, do bring a ﬂood of waters upon the earth, to destroy all ﬂesh, wherein is the breath of life, from under heaven; and every thing that is in the earth shall die” (Gen. 6:17); “every living substance that I have made will I destroy from off the face of the earth” (7:4).

God carried out His word:

“And all ﬂesh died that moved upon the earth, both of fowl, and of cattle, and of beast, and of every creeping thing that creepeth upon the earth, and every man: all in whose nostrils was the breath of life, of all that was in the dry land, died” (vv. 21,22).

The Ark was a very large structure, much bigger than Noah and his family needed for their own safety. God used it to house the animals and birds that would otherwise have perished but would be needed to replenish the earth after the Flood had receded.

God’s covenant with Noah and his descendants

God’s covenant with Noah after the Flood guarantees that all ﬂesh will not again be de- stroyed by a ﬂood: “I will establish My covenant with you; neither shall all ﬂesh be cut  off any more by the waters of a ﬂood; neither shall there any more be a ﬂood to destroy the earth” (Gen. 9:11). The token of this covenant is the rainbow. It may be that the rainbow had not been seen before the Flood. But whether it had or not, the signiﬁcant point is that “the bow shall be in the cloud; and I [God] will look upon it, that I may remember the everlasting covenant between God and every living creature of all ﬂesh that is upon the earth” (v. 16).

Noah saved by faith and works

God spared Noah, “a just man and perfect in his generations” who “walked with God” (6:9). Although a man of outstanding character, whose name is linked with Daniel and Job as a righteous man (Ezek. 14:14,20), Noah was required to believe God’s warning about the impending Flood and to prepare an ark to escape from its devastation (Gen.   6:14):

“By faith Noah, being warned of God of things not seen as yet, moved with fear, pre- pared an ark to the saving of his house; by the which he condemned the world, and became heir of the righteousness which is by faith” (Heb.  11:7).

The Flood—a ﬁgure of salvation through faith and  baptism

The Ark, built by Noah in faithful response to God’s warning, became the means of salva- tion from the Flood. Being in the Ark, shut in by God, was the only way to be saved from the catastrophe that engulfed that civilisation. Peter uses this event to represent the way  of salvation available today, through belief, baptism and faithful way of   life: “the longsuffering of God waited in the days of Noah, while the ark was a preparing, wherein few, that is, eight souls were saved by water. The like ﬁgure whereunto even baptism doth also now save us (not the putting away of the ﬁlth of the ﬂesh, but the answer of a good conscience toward God,) by the resurrection of Jesus Christ” (1 Pet. 3:20,21).

Just as Noah responded to God, so too men and women are required to believe God’s Word. The resulting baptism is thus more than a wash; it becomes “the answer of a good conscience towards God”. Like Noah, believers will continue to live their lives by God’s standards.

Jesus likened the state of society at the time of his return to that in Noah’s time (Mt. 24:37- 39; Lk. 17:26,27). That society was violent, godless, and concerned only with day-to-day material activities.

Peter warned that people would wilfully ignore the fact that God had destroyed the world in Noah’s day, despite its witness to a God of judgement, Who intends to “judge  the world in righteousness” by Jesus Christ (2 Pet. 3:5-7; Acts   17:31).

He further warns, “The Lord is not slack concerning His promise, as some men count slackness; but is longsuffering to us-ward, not willing that any should perish, but that all should come to repentance. But the day of the Lord will come as a thief in the night . . .”   (2 Pet. 3:9,10).

Those who heed the warning of the Flood will, “according to His promise, look for new heavens and a new earth, wherein dwelleth righteousness” (v.  13).

This leaﬂet is produced by The Testimony Magazine, 26 Tiercel Avenue, Norwich NR7 8JN, to encourage personal and ecclesial study of Bible principles. Further copying for  distribution is encouraged.