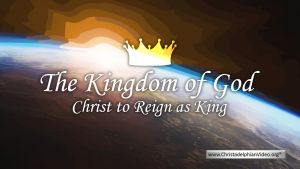 THE KINGDOM OF GOD

What is the Kingdom of God? Several answers are given to this question:

Only the last of these fits Bible teaching.

After His resurrection Jesus spent forty days with his disciples, “speaking of the things pertaining to the kingdom of God” (Acts 1:3). At the end of this time the disciples “asked of him, saying, Lord, wilt thou at this time restore again the kingdom to Israel?”. He did not tell them that their idea of the Kingdom was wrong, but said: “It is not for you to know the times or the seasons, which the Father hath put in His own power” (vv. 6,7).

Then Jesus ascended to heaven, and angels promised the disciples: “this same Jesus, which is taken up from you into heaven, shall so come in like manner as ye have seen him go into heaven” (v. 11). Later Peter said: “[God] shall send Jesus Christ, which before was preached unto you: whom the heaven must receive until the times of restitution of all things, which God hath spoken by the mouth of all His holy prophets since the world began” (3:20,21).

Putting these passages together, the Kingdom of God is to do with:

That the Kingdom of God once existed is shown by some words of King David: “and of all my sons . . . [God] hath chosen Solomon my son to sit upon the throne of the kingdom of the LORD over Israel” (1 Chron. 28:5).

Israel the kingdom of God

The Old Testament kingdom of Israel established under David was thus the kingdom of God. The various elements of this kingdom were all God’s:

The basis of the Kingdom which Jesus Christ is to set up at his return is the kingdom of Israel restored, but this Kingdom will be worldwide in extent, though centred on Israel. This is shown by considering the future Kingdom under the same five headings:

. . . bring them into their own land . . . I will make them one nation in the land upon the mountains of Israel”. The passage continues: “they shall dwell in the land that I have given unto Jacob My servant, wherein your fathers have dwelt” (v. 25). However, the rule of Christ will extend to all the earth: “And the LORD shall be king over all the earth” (Zech. 14:9); “He shall have dominion also from sea to sea, and from the river unto the ends of the earth” (Ps. 72:8).

When will the Kingdom be established?

The Kingdom of God will be established when Christ returns in fulfilment of the promise to the disciples in Acts 1:11. Jesus Christ provides two indications of when this will occur:

When Israel is restored: “And they shall fall by the edge of the sword, and shall be led away captive into all nations: and Jerusalem shall be trodden down of the Gentiles, until the times of the Gentiles be fulfilled” (Lk. 21:24). After nearly two thousand years, the Jews now control Jerusalem again.

When the world is in trouble: “And there shall be . . . distress of nations, with perplexity . . . men’s hearts failing them for fear, and for looking after those things which are coming on the earth” (vv. 25,26). This situation has arisen in the twentieth century, especially in recent years.

“And then shall they see the Son of man coming in a cloud with power and great glory” (v. 27);

“when ye see these things come to pass, know ye that the kingdom of God is nigh at hand” (v. 31).

The Kingdom of God will soon be established. Now is the time to prepare for it.

This leaflet is produced by The Testimony Magazine, 26 Tiercel Avenue, Norwich NR7 8JN,   to encourage personal and ecclesial study of Bible principles.  Further  copying  for distribution is encouraged.