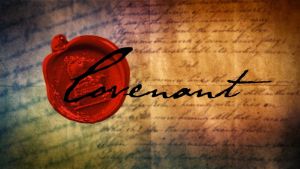 What is a covenant?

In everyday use a covenant describes an agreement between parties where there are benefits and responsibilities for the parties and penalties for non-compliance. It was the practice when Scripture was being written to sacrifice an animal and divide the carcase into pieces. The parties contracting the covenant would then pass between the pieces to confirm the covenant and in acknowledgement that their lives would be forfeit if they failed to keep their part of the agreement. In Genesis 15:18, where the promise of the land is confirmed to Abraham, it says: “In the same day the LORD made a covenant with Abram, saying, Unto thy seed have I given this land, from the river of Egypt unto the great river, the river Euphrates”. The word “made” should be translated ‘cut’. It is clear when this chapter is carefully read that Abraham passed between the pieces of several sacrifices (vv. 10,11) and God also did (v. 17; the burning lamp must have been the Spirit of God). Another example of this practice is found in Jeremiah 34:18,19, and in the New Testament the writer to the Hebrews also seems to refer to this procedure in 9:15-17, where he argues that Jesus is the covenant sacrifice, the mediator who died to confirm the new testament, that is, covenant.

Covenants necessarily involve the two parties making solemn promises to each other. Scrip- ture often links the ideas of covenants and promises, for example, Psalm 105:8,9 and Luke 1:72,73. Paul in Ephesians writes of ”the covenants of promise” to which Gentiles can now be related (2:12,13). Whilst God will never renege on his side of a covenant, men have always failed to live up to their side, Jesus being the one exception. It is a wonder that the great God of heaven will stoop to make covenants with erring men, and many men of faith have acknowledged this in their prayers and teaching, addressing the Almighty as “God, Which keepeth covenant and mercy” (Deut. 7:9; cf. Neh. 1:5; Dan. 9:4).

When Jesus introduced the breaking of bread in the upper room in Jerusalem, shortly before his death, before he passed the cup of wine round he said: “this is my blood of the new testament [covenant], which is shed for many for the remission of sins” (Mt. 26:28). This

covenant is different from the old (Mosaic) covenant because under it God promises forgive- ness of sins. The old covenant was constantly broken by Israel, but, because of the excellence of Christ’s offering, under the new covenant God can forgive, and will be able to fulfil all His covenants of promise (Rom. 8:1-4). References such as 2 Corinthians 4:14,15 and Galatians 2:20 show that the love of Christ in offering himself acts as a powerful example in the outworking of the new covenant on the hearts of believers. It is this which is called to mind in the breaking of bread service.

Jesus is introduced to us in the New Testament as “the son of David, the son of Abraham” (Mt. 1:1). Two of the great covenants of Scripture were given to these men (Gen. 17:7; 2 Sam. 23:5). Paul says that Jesus came “to confirm the promises made unto the fathers [of Israel]”, and that all the promises of God in him are yea and Amen (Rom. 15:8; 2 Cor. 1:20). So the offering of Jesus makes possible the fulfilment of the great and precious promises. This is seen in Genesis 15:4-21. Abraham was not lacking in faith, but wanted to know by what means he, a mortal and sinful man, might inherit the land of Canaan for an everlasting possession. God’s answer to him was a prophetic vision of the sacrifice of Christ (see above). The apostle calls Jesus “the mediator of the new testament [covenant]” (Heb. 9:15). Zacharias, when his tongue was loosed, saw the Lord Jesus as the one who would fulfil the covenants of promise to Abraham and David (Lk. 1:68-73).

When we read Jeremiah 31:31-34, and the apostle’s quotation of it in its entirety in Hebrews 8, we realise that the primary purpose of the new covenant is the cleansing and adoption of Israel as the people of God in the Kingdom. The apostle refers clearly to the house of Israel and the house of Judah, and the context is the people who rejected the old covenant now accepting the new. Other prophets teach the same. Isaiah 59:20,21 (quoted by the Apostle Paul in Romans 11:26,27) tells us that the redeemer (Christ) will come to Zion and turn away ungod- liness from Jacob to fulfil the covenant. Ezekiel speaks of the everlasting covenant that God will make with His nation, and of their cleansing (37:23-26). Jeremiah tells us that the covenant of night and day is a guarantee to us that God will keep His promises to David (32:40; 33:20- 22). Zechariah 12 and 13 describes how Jews in the land will be cleansed, and Ezekiel 20:33-  44 tells how the Diaspora Jews will be cleansed by the work of the new covenant.

Some features of the new covenant

This leaflet is produced by The Testimony Magazine, 26 Tiercel Avenue, Norwich NR7 8JN,  to encourage personal and ecclesial study of Bible principles. Further copying for   distribution is encouraged.