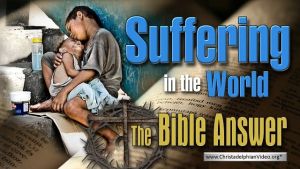 THE PROBLEM OF SUFFERING

We live in a world of evil, which brings with it much suffering. It is often difﬁcult, and sometimes impossible, to ﬁnd satisfactory explanations for particular and individual cases of evil and suffering, but the Bible helps us to understand the causes of evil, and how all suffering will eventually cease to exist in the earth.

Evils can be placed into two groups: those which are natural occurrences, and those which are man-made. Natural evils are things like storms, ﬂoods, tornadoes, whirlwinds, earthquakes and volcanic eruptions, accidents such as lightning strikes, and diseases, and the greatest of all evils, death. Man-made evils include violence, war, political and industrial strife, exploitation of people and of their environment, terrorism, immoral behaviour, which can lead to pornography, sexual violence, drug addiction, greed, and much else. All this will cease when the glorious Kingdom of God has run its course and God’s glory ﬁlls the earth, as He has promised many times (Num. 14:21; Ps. 72:19; Isa. 6:3; 11:9; Hab. 2:14).

God, of course, cannot be blamed for the many wicked things that people do to other people, for these things are caused by the innate sinfulness of human thinking (Jas. 4:1-  12; Mk. 7:20-23). But the Bible tells us that the natural world is under God’s control, and that therefore the natural evils listed above come from Him. Why does God allow evil? It should be remembered that many good things that we take for granted each day also come from God our Maker. Jesus said, “Your Father Which is in heaven . . . maketh His sun to rise on the evil and on the good, and sendeth rain on the just and on the unjust” (Mt. 5:45; cf. Acts 14:15-17; Ps. 104:10-24). So both evil and good are of God, as Job acknowledged (Job 1:21; 2:10). Other scriptures such as Isaiah 45:7 and Amos 3:6 attribute evil, as well as good, to the Lord God.

The question remains, however, Why did God bring evil into the world with all the suffering that comes in its train?

God saw everything that He had created and declared that it was very good (Gen. 1:31). He made one simple law for Adam and Eve to keep, with the warning that disobedience would result in death: “in the day that thou eatest thereof thou shalt surely die” (2:16,17). As a result of Adam and Eve’s breaking of God’s law, all the descendants of Adam and his wife Eve die, and a curse was placed on the ground whence they were created (3:17-19). The physical earth on which we live, and its atmosphere, are sources of disease, of weeds and parasites, and produce earthquakes, volcanoes, tsunamis and adverse weather.

Some of the evil that comes by this means is Divinely directed by God for His purposes. Thus we read that when the plagues came on Egypt “the LORD brought an east wind upon the land all that day, and all that night” (Ex. 10:13). In the case of Jonah, God sent a storm and tempest as well as the great ﬁsh that swallowed him alive and vomited him out after three days and three nights (Jonah 1:4,17; 2:10). However, much of the evil that comes in the world cannot be attributed to particular sins committed by particular individuals or nations, but is part of the general outworking of the consequences of sin in the world. Jesus indicated this in his teaching, when he said regarding the man born blind that it was not due to either his sin or that of his parents (Jno. 9:3). See also Luke 13:1-5, where Jesus gives us an important lesson about tragic accidents.

Because sin is the root cause of evil and suffering, and God is both merciful and just, a way of conquering sin and removing its effects from the earth has been achieved through the work of Jesus Christ, who will return to set up a kingdom of righteousness and peace, ruled from Jerusalem.

The purpose of evil and suffering

God has decided to give the human beings He has created freedom of choice. We can trust Him or not, as we choose. We can believe His Word, the Bible, or we are free to ignore it. God wants us to love and trust Him of our own free will, and gives many of us a lifetime of opportunity to do so. This freedom of choice also results in suffering, because evil people bring evil upon others. Natural evil is part of the outworking of the Adamic curse on the earth, and will continue until the end of the Kingdom, when there will be no more curse (Rev. 21:4; 22:3). Suffering is designed to bring people to God as their only hope for a last- ing cure for their ills, unlike the temporary cures that the medical profession can achieve; and suffering is an important way by which God perfects the characters of His servants   (2 Cor. 4:14-17; Rom. 8:18; Heb. 12:7-11).

Above all, we have the case of Jesus. We are told in Hebrews 5:8, “though he were a Son, yet learned he obedience by the things which he suffered”. If suffering was necessary for the perfection of the character of Jesus, the Son of God, then it is much more so for those who are his followers. The comforting promise is given to believers that they will not suffer more than they are able to endure (1 Cor. 10:13).

The end of all suffering and evil

Once again his healing touch will be at work amongst those who suffer and have faith: “Then the eyes of the blind shall be opened, and the ears of the deaf shall be unstopped. Then shall the lame man leap as an hart, and the tongue of the dumb sing: for in the wil- derness shall waters break out, and streams in the desert” (Isa. 35:5,6). Sin will become less common as people learn of God’s ways and walk in His paths, and suffering will decline as people live longer lives (65:17-20). At the end of the 1,000-year reign of Christ (the Mil- lennium) there will be a complete end to sin and death, and God will be all in all (Rev. 20 (whole chapter); 21:1-5; 1 Cor. 15:24-28).

The present time is our opportunity to show faith and obedience to the call of Christ and, despite all the suffering around us, look forward with conﬁdence to the glorious Kingdom of God that Jesus will set up shortly.

This leaﬂet is produced by The Testimony Magazine, 26 Tiercel Avenue, Norwich NR7 8JN, to encourage personal and ecclesial study of Bible principles. Further copying for distribution is encouraged.