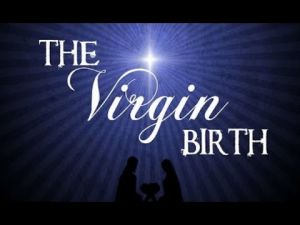 “Behold, a virgin shall conceive, and bear a son”.

Bible teaching concerning the Virgin Birth is clear and unambiguous. It was taught and believed as part of the gospel faith that spread throughout the Roman Empire in the first and second centuries. The New Testament gospel records in Matthew 1 and 2 and Luke 1 and 2 detail the birth of Jesus Christ, attributing the birth to the power of the Holy Spirit, and not to Joseph, who was betrothed to Mary. In the Old Testament, written centuries before the event, the Vir- gin Birth is predicted, and it is stated that God would indeed be the Father of the Lord Jesus Christ. The prophets Isaiah and Micah, along with the books of Deuteronomy, 2 Samuel, and Psalms, all support this doctrine.

The prophet Isaiah speaks of the provision of Jesus in these words: “And He [God] saw that there was no man, and wondered that there was no intercessor” (59:16). Here we see that God was aware of the sinful state of humanity and that there was no one who could render perfect obedience to deliver mankind from sin and death. It was for this reason that God caused Christ to be born by the power of the Holy Spirit, so that one of the human race might open up the way to salvation and eternal life both for himself and for all those who would come to God through him. In this there is an echo of the promise of God to Eve in Eden that the seed of the woman would bruise the head of the serpent, indicating God’s overruling power in bringing forth a saviour (Gen. 3:15).

Isaiah also delivered to the royal household in his day the powerful prophetic message con- cerning the Virgin Birth, “Behold, a virgin shall conceive, and bear a son, and shall call his name Immanuel”, meaning ‘God with us’. Although spoken to king Ahaz, it was not fulfilled until Mary, who was of the line of David, gave birth to the Lord Jesus Christ. The critics who do not accept the Bible teaching concerning the Virgin  Birth raise a number of claims that   this prophecy is not referring to Christ, foremost of which are that either that it refers to King Ahaz’s son, Hezekiah, or that the word translated ‘virgin’, almah, means a young woman of marriageable age; and that another word, bethulah, means ‘virgin’, and this would have been used if that was the true meaning of the prophecy. The first point can be discarded, for with- out doubt Hezekiah would have been born before Ahaz ascended the throne, so Ahaz’s wife would not be described here. Regarding the choice of words, we note that the word almah is used in six other references in the Old Testament, and none of these describes a woman who  is not a virgin.* Matthew 1:22,23 says the birth of Christ was a direct fulfilment of Isaiah 7:14.

The Son of God in the Old Testament

This Immanuel, the son spoken of in Isaiah 7, is obviously the “child” and “son” whose “name shall be called Wonderful, Counsellor, The mighty God, The everlasting Father, The Prince of Peace” (9:6). The same person is spoken of as the “Branch” in Isaiah 11:1-10. Together, these references give us a vision of the one whom God would cause to be born, and of his work and authority. He was to be like God, to bear His Name, truly to be the Son of God. This supports the teaching of the Virgin Birth.

As we read the Old Testament promises and prophecies, the language clearly speaks of the one who was to come, the Lord Jesus Christ, as someone who would be unique because of his

relationship with God. We read that God says, “I will raise . . . up” (Deut. 18:18), “I will be his father” (2 Sam. 7:14) and “Thou art My Son” (Ps. 2:7). When we come to the New Testament and the message of the angel to Mary in Luke 1 we see how all these Old Testament sayings lead naturally to the event of God’s Holy Spirit power bringing about the conception of our Lord.

The birth of Jesus

Matthew 1 gives us an account of the birth of the Lord Jesus, and of Joseph’s problem of find- ing Mary with child and needing the guidance of the angel as to how he was to respond. The sequence of human fathers in verses 1-16 contrasts with the message of the angel that the power of God caused Mary to conceive. In Luke’s Gospel we see the contrast between the birth of John Baptist and that of the Lord Jesus. In the first the power of God enabled a natural conception to take place between Zacharias and Elisabeth, whereas with Mary it was the direct influence of the Holy Spirit that caused her to conceive. The words of Scripture leave no room for doubt or discussion in relation to what brought about the birth of Jesus. To reject the miraculous in this instance means that the later miraculous act of Christ’s resurrection by God’s power is also in doubt, and the whole foundation of the Christian gospel, the hope of salvation and the veracity of Scripture is called in question.

Matthew 1:18-25 is linked directly to Isaiah 7:14, and the birth of Jesus is presented as a fulfilment of that prophecy. To reject this is to reject the inspiration of Scripture. We read that the angel said to Joseph regarding Mary, “that which is conceived in her is of the Holy [Spirit]” (v. 20), so Joseph was encouraged to take her as his wife rather than putting her away, which was his first reaction when he found she was with child. The Matthew account refers to the work of Christ as one of saving people from their sins (v.  21), and this is followed in chapter   2 by the arrival of the wise men seeking one “born King of the Jews” (v. 2), a clear indication  of ancient written records foretelling the birth of Jesus.

Luke describes the Angel Gabriel’s message to Mary and her reaction. Although the name of the child is given, Jesus, indicating his work as a saviour, the main emphasis in this record is on the authority and kingship of the one to be born: “He shall be great, and shall be called the Son of the Highest, and the Lord God shall give unto him the throne of his father David” (1:32). In response to Mary’s question as to how this birth should come about, the message of the angel is clear and concise: “The Holy [Spirit] shall come upon thee, and the power of the Highest shall overshadow thee: therefore also that holy thing which shall be born of thee shall be called the Son of God” (v. 35). Here we see Jesus described as the Son of God because the power of God brought about his conception. (He is known as the Son of man because he also inherited his mother’s nature.)

Luke 2:49; Matthew 26:29; John 12:49,50 and John 14:9 are just a few examples of the way in which Jesus in his life and ministry used words which clearly indicate his acceptance of his supernatural birth by the Holy Spirit. Acts 3:26; 13:33; Galatians 4:4; Ephesians 1:3 and Hebrews 1:5 are further references that show that throughout the New Testament the unique relationship between God and Jesus, that of a Father and Son, brought about by his conception through  the power of the Holy Spirit, was clearly understood and taught: “This is My beloved Son, in whom I am well pleased” (Mt. 3:17).

Scripture confirms through the words of God Himself the relationship which could only have come about by the power of the Holy Spirit acting on Mary. To Christ was the privilege given of being the ‘firstborn’ of God, a second Adam. Our relationship with God as our Father comes about through “adoption” (Gal. 4:4,5) because of Christ’s faithful obedience to his Father.

This leaflet is produced by The Testimony Magazine, 26 Tiercel Avenue, Norwich NR7 8JN, to encourage personal and ecclesial study of Bible principles. Further copying for distribution is encouraged.