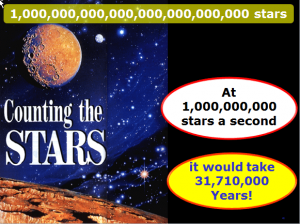 The scripture draws the equivalence between the stars of heaven and the grains of sand on the sea-shore. Today we know that this is so!  As our slide shows, if we were able to count a billion stars a second, it would still take us over 31million years to complete the job of counting the estimated one trillion, trillion stars! What majestic power. There brightness is just right; not too bright so could be seen during day nor overwhelming the moonlight at night, and keeping us awake at night. Their colours, predominantly white and yellow, form a good contrast against the black night sky, so the stars can be clearly seen.

The stage was now set for the events of Days fifth and sixth, to fill the earth with life.