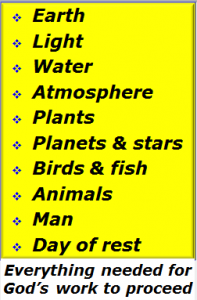 Yes it does! As we say, God’s wrath is soon to be poured out upon an atheistic world that refuses to accept that there is a God. So why should we give any credence to the ideas of man to explain away God the Creator? 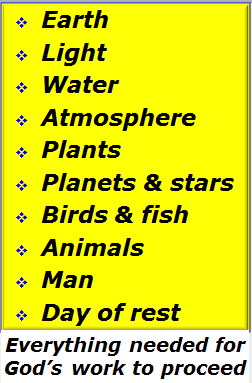 Many think that “science” has given us the answers to virtually everything we need to know about how life evolved, excepting, yes, there are some things we don’t know, but with the pace of new discoveries we are virtually there with our understanding of evolution. If this is our understanding, then we have sadly been brainwashed by the media who eager to promote godless ways. The honest among “scientists” admit that the opposite is the case. In Darwin’s day an amoeba seemed a simple blog of matter and not too difficult to evolve. What the intervening years has taught us is the stunning complexity of life. There is no such thing as simple life; even the humblest bacteria are an amazing powerhouse of unimaginable complexity and design. DNA turns out to be far, far, from a simple, 4 letter coding system. The complexity of the stars and planets and the precision of the heavens is awesome enabling space scientists to know precisely where Pluto would be over nine years later when the New Horizons space probe was launched in 2006!

It is a convenient phrase, “millions, billions years ago …” Its effect is to make us think it was such a long time ago we needn’t probe too deeply. Anything is possible given aeons of time! But no it is not possible! It is not possible to change one species into another without additional genetic coding information. True with that information, that gene pool we can breed big dogs right the way down to tiny dogs. But they will never turn into horses! There is no mechanism that will add information; it has to be there at the start.

So deeply are the foundations of evolution being undermined that in all seriousness some proponents are saying life must have come from space! It is too complex to arise through random chance events. We know indeed it did come from space, from God who put all the genetic information in place from the beginning. Far from evolving, creation, is devolving, breaking down, through the effect of the curse.

A six day creation is constant with the rest of scripture. Genesis tells us that the creation of Adam was during this time period covered by the phrase “in the beginning”. Under no alternative interpretation that accommodates long ages could the creation of Adam (or mankind for that matter) be linked to the creation of the earth and the sun, moon and stars. In every alternative viewpoint they are separated by alleged billions of years. Yet let’s see how consistent scripture is.

Have ye not read, that he which made them at the beginning made them male and female,

And said, For this cause shall a man leave father and mother, and shall cleave to his wife: and they twain shall be one flesh? Mat. 19:4-5

So Adam and Eve were part of that work of the beginning, not aeons after it.

The very heart of God’s Law to Israel revolved around these words.

For in six days the LORD made heaven and earth, the sea, and all that in them is, and rested the seventh day: wherefore the LORD blessed the sabbath day, and hallowed it. Exo. 20:11

Clearly Adam and Eve were there during this seventh day, so it must be time as we know it, not millions or billions of years.

Come ye near unto me, hear ye this; I have not spoken in secret from the beginning; from the time that it was, there am I: and now the Lord GOD, and his Spirit, hath sent me. Isa 48:16 ¶

God is saying He has spoken openly since the beginning. On evolutionary ideas there would have been no-one to speak to for the vast span of time. Let’s just divert to consider the huge difference in time scale between 6,000 years and the current estimate of the date of alleged Big Bang, 13,798,000,000 years ago.