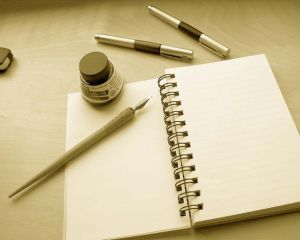 This page is dedicated to the personal recollections of Christadelphians the world over, Past and present, who have kindly offered to share their accounts of how they came to a knowledge of the truth and baptised.

My Name is Brother Michael Houghton, I live in Preston (UK).

This is the story of how God, in his infinite grace and mercy guided me to the truth.

As a child, I attended the church choir through school which meant going to church weekly. I was the only one out of a family of 3 sons. I also went to scouts which meant occasional church parades. I felt at home going to church even though I was very young and the only 1 of 3 boys who enjoyed going to church. As I went on to High School I got more involved with sports and left the church behind. However, I always had in my mind the existence of God and didn’t buy what teachers were teaching in terms of evolution and theistic evolution something just didn’t fit right with me it just went against all my personal feelings.

At the age of 18 I started going back to church on a Sunday. It felt great to be back at church I enjoyed it and I felt like I was back where I belonged. I started to get to know people there and talking about each other’s faith and views. However something didn’t quite fit right there seemed to be a clash in our views and faith, some were just going to church to “get into heaven” I started to think about this and ask questions. One of the questions I asked was why they believed they went to heaven when they died? They replied because the Bible and church teach that we go to heaven when we die a reference that was pulled out was 2 corinthians chapter 5 where it says in verse 8 about being away from the body and at home with the Lord. So I took the time to study the chapter and realised it was talking about our earthly body and receiving a heavenly body like Christ’s. I went back the following week and told them that I had been studying the chapter and in no way did it promote heaven going but rather the changing of the body from being mortal to one of immortality.

A response I got was ‘well surely we get this body when we die and go to our heavenly dwelling with God’. At first, I thought ok, yes I can accept that and went and sat down for the service, but throughout the service, my mind kept thinking and remembered that I came across a passage where it talked about resurrection at the last trumpet call of God when the dead in Christ will rise first. So I thought surely we don’t go to heaven when we die. Why if we go to heaven would we need to be raised considering we’d already been in heaven with God? It made no sense, however, I didn’t say anything after the service as I wanted to get home and in all honesty, was a little bit afraid to ask any more questions.

A few weeks later an opportune moment arose so I took the opportunity to say: you know you said we go to heaven when we die? Why would we need to be raised at the last trumpet call of God considering we would already be in heaven? Are we going to receive an immortal body when we die and then be changed back into a mortal body later on and then receive immortality again? That would make no sense. The response I got was one of disarray they said look believe what you want what will be will be. I responded believe what you want? Where is faith and truth in that?.

The group i was speaking with then went and spoke with others and I thought to myself oops I’ve annoyed them now. so from that moment onwards I didn’t ask any more questions. I kept going to the church on Sundays but it never felt quite right, my mind kept telling me these people are judging me they think I’m annoying because my beliefs are different from theirs so I left the church and didn’t go again (after all I thought the church was suppose to be united in faith) once I left that day I said to myself what will be will be but I will never go back to a church again and considering I won’t go to church again i don’t need to read the Bible anymore I’ll just do what I want to do and live like others my age.

At the age of 23, I watched a film called the green mile and there is a line there where Tom Hanks says: when I die and I stand before God what am I going to say? It got me thinking and i asked myself, Michael, if you stand before God what would you say? I thought I don’t know what I would say, I would probably say I believed in you and your son Jesus but I never felt right anymore in the church. That night I searched on YouTube: Bible Truth and a video came up it was called Study 4: The disintegration of the European Union and as Brexit

was a major talking point at that time I proceeded to click on the video and watch it, mainly out of curiosity more than anything. The speaker was called Jim Cowie and he got me hooked and craving more so I watched through the study series and thought it was more than amazing. The way he spoke and his confidence I was in awe of.

After watching through the full series I clicked on subscribe and watched more videos on the channel and got thinking to myself this group teaches the correct things and lines up with what the Bible declares especially the big questions. I watched throughout 2018 and 2019 and in 2020 there was a series on Revelation by Pete Owen and throughout the series.

I kept saying to myself I want to get involved in this so I put a message on a Bible truth and prophecy video asking for details and was made aware that there was an ecclesia in Preston. I gave them an email and arranged to meet with them,​ ​providentially, ​I managed to meet them a week before the 2nd Lockdown was brought in so thankfully I managed to join in with them on zoom throughout Lockdown and was just so pleased that I had found an ecclesia that spoke truth, and not only speaks the truth but is a family.

I was baptised on the 30th of September 2021 and enjoying my new life in Christ. It is amazing when you can see the love of God can bring you back even through the smallest of things like a film.