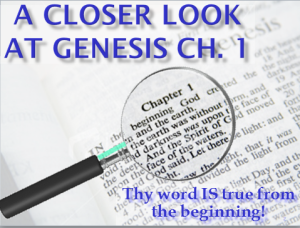 But did those early prophets write?  It has already been suggested above that Adam wrote at least Gen.4.  To this can now be added two other lines of evidence.  The first is that within the book of Genesis there are evidences of contemporary writing.  Gen.10v19 “And the border of the Canaanites was from Sidon…as thou goest, unto Sodom, and Gomorrah, and Admah, and Zeboim, even unto Lasha”.  Yet after the events of Gen.19 one could not “go” to Sodom, Gomorrah, Admah or Zeboim at all – they had been overthrown in the fiery destruction of the cities of the plain.

Thus Gen.10v19 – and probably the rest of Gen.10, must have been written before the destruction of Sodom.  Gen.14 records the battle between the Babylonian kings, headed by Chedorlaomer & the local kings in the land, including the kings of the four cities mentioned above.  v.3 states “All these were joined together in the vale of Siddim, which is the salt sea”.  Clearly, after the destruction of Sodom the site of the battle was inundated – but Gen.14v3 describes it as a dry valley.  Further comment will be made on the structure of this verse later.

The second line of evidence for contemporary written Scriptures in the time of the Patriarchs is found in the New Testament.  Gal.3v8 “The scripture (Gr. graphe = writing), foreseeing that God would justify the heathen through faith, preached before the gospel unto Abraham, saying, In thee shall all nations be blessed”.   This passage shows that Abraham had at least Gen.12v1-3 as a written Scripture in his lifetime.  Similarly Jas.2v23 & Romans 4v23 show that Abraham also had Gen.15v6 in writing before the time of the sacrifice of Isaac – else how could he “fulfil” this “Scripture”?