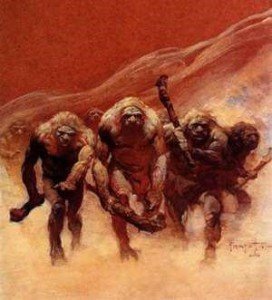 Theistic Evolution: On the Origin of Man

It is a common challenge for the modern Christian to unify his belief in the Bible, which describes God as the Creator of all, with the current trend in popular thinking that all living things evolved through random modification and subsequent natural selection. The commonly resulting belief is “Theistic Evolution”: an attempt to combine the Creation and Evolution theories. Theistic evolutionists believe the Bible the inspired word of God, yet also believe man’s existence on Earth to be derived from millions of years of evolution.

We consider the philosophical and theological credibility of ‘Theistic Evolution’ with particular reference to the origin and development of Man.

Argument 1: The Origin and Trend of Morality

Evolution insists humans developed from less complex animal life. (1) Therefore the initial moral state of the human species must be zero (amoral). By contrast the Bible insists the first man was created by a direct act of God, and created in a state described as ‘very good:’

So God created man in his own image, in the image of God he created him; male and female he created them… God saw all that he had made, and it was very good. And there was evening, and there was morning-the sixth day. (Genesis 1:27,31)

The Bible also describes the first man as displaying positive moral attributes by tending and caring for other living things, albeit at God’s behest:

This results in a natural contradiction between the two theories. Resolution of this contradiction may be possible: one could argue a species is not human until it evidences a positive moral behaviour (a wholly arbitrary distinction, but not immediately impossible). Alternatively one may argue Adam’s initial lack of discernment between good and evil does describe an amoral state (The Bible states it was only after eating the fruit that he came to know good and evil: see Genesis 3:1-24), regardless of the caring nature of his work in Eden. These are both unlikely postulates, but arguably possible.

An inviolable tenet of evolution is that all characteristics of an individual develop gradually. Any lasting developmental change to the species is argued to be so small as to be completely invisible between successive generations (2) (itself a frustrating assertion since it excludes comparison between all living life-forms from the sphere of evidence). No catastrophic discontinuities (i.e. very sudden changes in development), either positive or negative, can be accepted: they directly violate this edict. But the Bible insists that within the generation of one man, Adam: “sin entered the world” through this *one* man; and, further, that the actions of this one man had a fundamental effect on the entire species:

Therefore, just as sin entered the world through one man, and death through sin, and in this way death came to all men, because all sinned… Nevertheless, death reigned from the time of Adam to the time of Moses, even over those who did not sin by breaking a command, as did Adam, who was a pattern of the one to come. (Romans 5:12,14)

It is impossible to reconcile these differences: at least one theory must be rejected.

The overall direction of the morality of man. Evolution claims the natural selection process refines the qualities of the species over many generations, ever tending towards properties beneficial to the species as a whole. (3) Thus the trend of morality for the human species must be heading in the upward direction, unless it is argued that morality is a disadvantageous trait per se, in which case it should never have emerged species-wide at all. But the Bible declares the reverse: that man’s moral behaviour is deteriorating:

In fact, everyone who wants to live a godly life in Christ Jesus will be persecuted, while evil men and impostors will go from bad to worse, deceiving and being deceived. (2 Timothy 3:12-13)

The contradiction between these two descriptions is insurmountable. Indeed it is a core tenet of scripture, which theistic evolution necessarily denies, that if man is to ever attain a morally perfect, or even ‘good,’ state then a reversal of his current direction must be effected from an outside agency:

Peter replied, “Repent and be baptized, every one of you, in the name of Jesus Christ for the forgiveness of your sins. And you will receive the gift of the Holy Spirit. The promise is for you and your children and for all who are far off–for all whom the Lord our God will call.” With many other words he warned them; and he pleaded with them, “Save yourselves from this corrupt generation.” (Acts 2:38-40)

The LORD God said, “It is not good for the man to be alone. I will make a helper suitable for him.” Now the LORD God had formed out of the ground all the beasts of the field and all the birds of the air. He brought them to the man to see what he would name them; and whatever the man called each living creature, that was its name. So the man gave names to all the livestock, the birds of the air and all the beasts of the field. But for Adam no suitable helper was found. (Genesis 2:18-20)

Yet clearly if Adam had evolved gradually he would be surrounded by an entire species identical to him! He would have two direct parents, and potentially siblings, who had all undergone minuscule modifications for millions of years. This state of affairs would have yielded thousands, even millions, of potentially suitable helpers for him and obviated the necessity for Eve to be created.

New Testament scriptures corroborate the Genesis claim, also insisting that Adam was the first human in the genealogical line.

This statement does not leave room for an evolved genealogy, theistic or otherwise.

By the same token evolution necessitates that Eve was not the first female, for both male and female forms of the species would have been in existence for millennia. In contradiction the Bible demands that Eve was the “mother of all the living,” (the context excepts Adam from this list):

Adam named his wife Eve, because she would become the mother of all the living.  (Genesis 3:20)

This again is an insoluble contradiction: if the Bible story is true, then neither Adam nor Eve can have had similar parents or peers, or indeed any parents or peers at all. Again, either evolution or the Bible must be rejected, and the notion of theistic evolution fails entirely.

A further fundamental difficulty arises for theistic evolutionists when considering the origins of human death.

In the case of mankind evolving, ‘death,’ the loss of consciousness and subsequent decay of the physical body, would have been occurring for millennia within man’s species. Indeed the ongoing repetition of the birth/death cycle is a necessary component of the evolution sequence. The Biblical stance directly refutes this notion and presents a contradictory scenario outside of the scope of any form of evolution to accept. The Bible describes a situation where Adam would not see death as long as he was obedient to the commands God gave him:

And the LORD God commanded the man, “You are free to eat from any tree in the garden; but you must not eat from the tree of the knowledge of good and evil, for when you eat of it you will surely die.” (Genesis 2:16-17)

A theistic evolutionist might argue that a human death sentence associated with a certain crime does not prove human death was not occurring anyway. But the later writings of Paul clinch the matter with certainty, explaining that events in Eden really were the first occurrence of a human death in the world.

For since death came through a man, the resurrection of the dead comes also through a man. For as in Adam all die, so in Christ all will be made alive. (1 Corinthians 15:21-22)

More importantly these references teach that death was not the original state of the man: it is not the way God made him to be! This is a vital scriptural lesson, which the reader should appreciate is completely impossible to obtain alongside any form of evolutionary belief in the species of man. If evolution (however Theistic) is true, death is and always was a familiar bedfellow to the human race and not the result of any violation of an initial beauty and a greater plan.

Overall it is shown beyond a reasonable doubt that the Biblical descriptions of human history fundamentally contradict the necessary core teachings of evolution. However much the Bible account is defocused from fact into metaphor (itself a dubious practice), and however much the theory of evolution is deified to picture God lighting the fuse of a deliberately designed evolutionary sequence, the theories remain unmarriageable. This conclusion is not reached at the premeditated intention of the author; indeed the reverse is desirable to gain common ground amongst the widest audience. It is rather through considered assessment of the necessary consequences of evolution and the Biblical record that these ideologies are concluded mutually exclusive. This does not prove either the Bible or Evolution true or false, but it does prove that no version of ‘Theistic Evolution,’ however much it dilutes either or both contrasting theories, can be sensibly defended.

In particular, union between evolutionary progression and the Biblical record is shown to be an untenable position by consideration of the irreconcilably different histories of the origin of man, with particular regards to his state of both morality and mortality. It is not for want of either effort or intention that this marriage cannot be achieved; rather the reverse is true. It is only after, and precisely because of, detailed consideration of the stipulations and necessary philosophical and theological consequences of the available theories that one is compelled to conclude that the two accounts cannot be harmonized. If evolution is correct the Bible does not give accurate description concerning the origin of man, even in metaphoric form, and therefore cannot be the Word of God and should be rejected. Conversely, if the Bible is true, then man most certainly did not evolve, and speculation that he did can be rejected with equal confidence.

The theological implication of man existing by creation and not evolution is itself educational when considering the Biblical claim that man’s purpose is to reflect God’s image (Genesis 1:26). It implies the essence of God cannot grow from physical and chemical fusion of energy and matter, but rather can only be derived from the source (God) itself. It implies that that which truly should reflect the image of God does not have origins of chance synthesis in a warmed and electrified pool of proteins, but rather exists causally from the deliberate intention and creative power of a Sentient and Omnipotent Force.

Perhaps that does not overburden the senses after all.

Then God said, “Let us make man in our image, in our likeness, and let them rule over the fish of the sea and the birds of the air, over the livestock, over all the earth, and over all the creatures that move along the ground.” (Genesis 1:26)

As the rain and the snow come down from heaven, and do not return to it without watering the earth and making it bud and flourish, so that it yields seed for the sower and bread for the eater, so is my word that goes out from my mouth: It will not return to me empty, but will accomplish what I desire and achieve the purpose for which I sent it. (Isaiah 55:10-11)