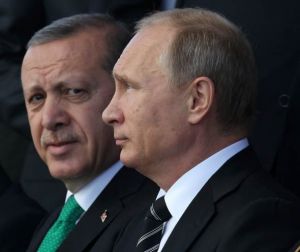 We must be particular to put all the prophecies of this time period alongside each other.

I recommend you read the following on this subject:
Zechariah 12, 13, 14
Joel 3
Ezekiel 38
Revelation 16 especially from v12 to end

Note that Ezekiel 37 is about the return and restoration of Israel… summarising
v21 – regathering (from 1860’s, but particularly after WW1)
v22 – Nationhood (1948) result of WW2
v22 – A King enthroned! Christ! result of WW3Ezekiel 38 gives a list of nations who will be confederate in war.
We know many of them. Gog is a leader – it is a cognate word with Agag (king of Amalekites).
Rosh, Meshech, Tubal are identified with areas of Russia.
We are now seeing the alliance of many of these countries. Iran (Persia) Gomer (France) Togarmah of the north – is Turkey, which is immediately to the north of Israel. Notice the language of v6 “many people WITH thee”. “With” is the language of alliance.. So Togarmah and these countries will be allied with Russia. MANY ARE ALREADY ALLIED AT PRESENT. As a result of the work of ISIS, France is allied and its soldiers are fighting alongside Russian soldiers in Syria… Astounding! What Christadelphians have been preaching about since 1848 is underway!!

Psalm 89 concentrates on the covenant of David which is fully realised in the greater son of David, even Christ (compare Luke 1:32,33). Though there is reference to triumphing over the enemies (v10), there is not a war as such. Did you have another Psalm in mind perhaps? Psalm 83 speaks of war, and certainly Israel has been subject to various wars and incursions from these ancient surrounding peoples. However, these peoples do not form the basis of “all nations” gathering against Jerusalem to battle as listed in Zechariah 14. The all nations are the combined nations of Nebuchadnezzar’s image (Daniel 2).