Print
October 20, 2016 – Audio, 8.30 MIN
(Links at bottom of page to download free viewers.)
The western world is building up to Halloween. Shops are full of scary masks and children are preparing for trick or treating.   But what is Halloween and what does the Bible have to say about it?

The History of Halloween

The name Halloween is a contraction of the words “All Hallows’ Eve”. A hallow is an old English word for “saint”. Halloween then is actually the eve of “All Saints day” – or Hallowmas – which takes place on November the 1st. It actually marks the start of a three-day observance called “Allhallowtide” – a time which churches dedicate to remembering the dead, including saints (or  hallows). It is thought that the present date of Hallowmas was most probably established by Pope Gregory III (731–741).

According to Catholic online: “All Saints’ Day is a solemn holy day of the Catholic Church celebrated annually on November 1. The day is dedicated to the saints of the Church, that is, all those who have attained heaven. It should not be confused with All Souls’ Day, which is observed on November 2, and is dedicated to those who have died and not yet reached heaven.”

So if the celebration is supposedly Christian in origin – although it might be pointed out there is nothing in the Bible about celebrating such a thing – why are there so many Halloween traditions which do not seem to link back to Christianity at all? The religious aspects of the holiday seem to be lost in popular culture. The answer to this question is that the origins of Halloween stretch back to before the Christian era. Prior to the Catholic Church seeking to Christianize the 31st of October, the Celtic pagans celebrated Samhain. This was, and still is a very important date in the Pagan calendar and marked the celebration of the “Feast of the Dead”. This feast is still celebrated today by those who practice paganism. 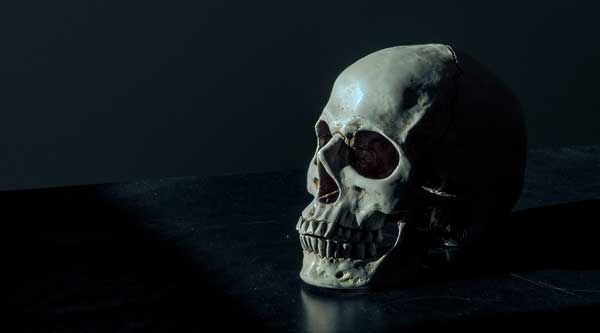 Halloween – when the spirits of dead people are honoured, celebrated, feared and remembered

According to a BBC page on Samhain “It was the time of year when the veils between this world and the Otherworld were believed to be at their thinnest: when the spirits of the dead could most readily mingle with the living once again… To celebrate Samhain the Druids built huge sacred bonfires. People brought harvest food and sacrificed animals to share a communal dinner in celebration of the festival. During the celebration the Celts wore costumes – usually animal heads and skins. They would also try and tell each other’s fortunes.”

So this is the true origin of the festival which explains where all of the traditions such as cutting up and putting lights in pumpkins, dressing up as zombies and dead people and going trick or treating come from. It was a superstitious pagan feast adopted and tweaked by the Catholic Church and then subsequent Churches. It is also connected to the occult and Satan worship. Nowadays it has evolved into a secular celebration with these origins virtually lost in the mists of time, giving way to capitalism, money making and entertainment.

What does the Bible say?

At the heart of the ideas behind Halloween is the concept of the immortality of the soul. Whether pagan or mainstream Christian this idea is at the centre of the celebrations. The basic concept is that when someone dies their soul lives on as a spirit to live in the afterlife and it is these sprits who are honoured, celebrated, feared and remembered at Halloween. However this idea is not found in the Bible – in fact the Bible plainly speaks of the dead being completely unconscious:

“For the living know that they shall die: but the dead know not any thing…” Ecclesiastes 9:5

“Put not your trust in princes, nor in the son of man, in whom there is no help. His breath goeth forth, he returneth to his earth; in that very day his thoughts perish.” Psalm 146:3-4

“For the grave cannot praise thee, death can not celebrate thee: they that go down into the pit cannot hope for thy truth. The living, the living, he shall praise thee…” Isaiah 38:18-19

The scriptures then clearly teach that death is a punishment for sin and is the end of life. The soul is not immortal as these passages show:

“He made a way to his anger; he spared not their soul from death, but gave their life over to the pestilence;” Psalm 78:50

“All they that be fat upon earth shall eat and worship: all they that go down to the dust shall bow before him: and none can keep alive his own soul.” Psalm 22:29

These verses are worth bearing in mind as society plays out the celebration of death and of the spirits of the dead in the coming weeks.

What should our reaction be?

For those who follow after Christ we know that pagan gods do not exist. We understand that the soul is not immortal and that the only hope of life after death is that of the resurrection of the dead that will take place when Jesus returns. Would it be a good idea for us to be mixed up in this festival which celebrates things which are in direct contrast to the truth revealed in God’s word? This is a question we must all answer on a personal level. However perhaps this passage from Philippians chapter 4 and verse 8 might be helpful:

This has been Matt Davies joining you for the Bible in the News. Join us again next week God willing.

For more audio like this and to visit the back catalogue visit http://www.bibleinthenews.com/Podcasts
http://bibletruthandprophecy.com/where-did-halloween-come-from/