Israel Independence Day: A Remarkable speech by the U S Vice President Mike Pence Video Post Bible in the News

Print
May 8, 2017 – Audio, 14.00 MIN
(Links at bottom of page to download free viewers.)
The introductory remarks by Ambassador David Friedman highlighted the fact that this was the first time the White House had celebrated Israel’s Day of Independence.  This Is Paul Billington with you this week.
THE VICE PRESIDENT:  Well, thank you, Mr. Ambassador.  Thank you all for being here.  And on behalf of the First Family, welcome to the White House.  (Applause.)
I bring greetings from the President of the United States of America, President Donald Trump.  (Applause.)  And on behalf of President Trump, just a few minutes ago, I had the distinct honor to wish a happy Independence Day to Prime Minister Netanyahu over the phone as we celebrate the 69th anniversary of the independence of America’s most cherished ally, the Jewish state of Israel.  (Applause.)
I want to thank all the distinguished guests who are here and members of Congress who made time to come to the White House this afternoon, and people representing a broad spectrum of Americans who all cherish the relationship that the American people have enjoyed throughout these 69 years with the people of Israel.
It’s humbling to be here with you on this remarkable and even a hallowed day.  From Secretary Steve Mnuchin to Ambassador David Friedman — (applause) — to Senator Orrin Hatch, who has been a great, great champion for Israel all these many years in the United States Senate.  (Applause.) 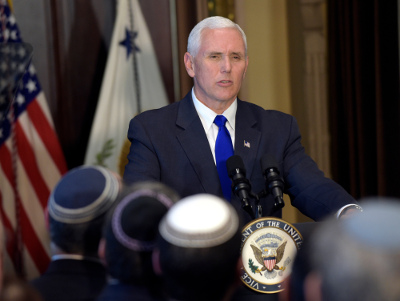 Mike Pence giving a speech speaking of the miracle of Israel.

Thank you very much.  May God continue to bless and protect Israel and the people, and may God bless America.  (Applause.)