2 Incredible Archeological Discoveries – The Walls of Jerusalem and The Jerubbaal Inscription! 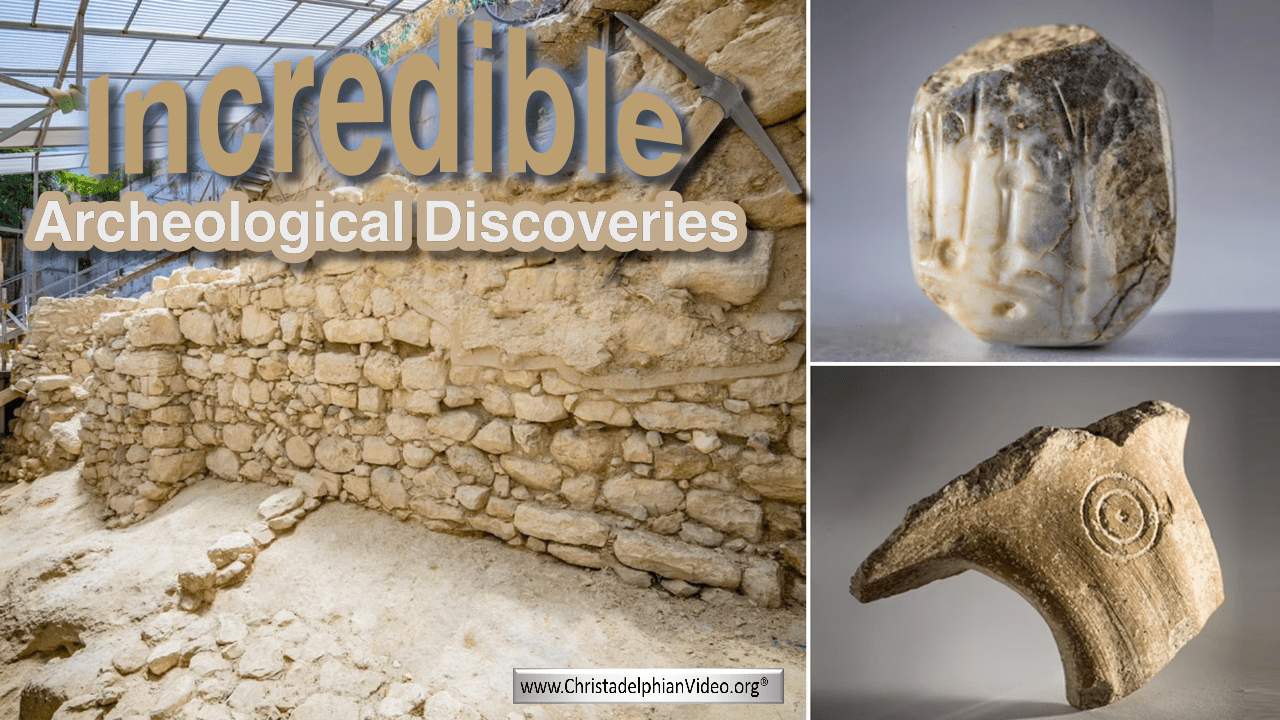 July 18, 2021 – Audio, 8.49 MIN
(Links at bottom of page to download free viewers.)
On July 12 it was reported that an artifact from the time of the judges had been discovered, with a fairly clear inscription of the name Jerubbaal! On July 14 it was announced that a segment of Jerusalem’s First Temple city wall had been uncovered!

The Walls of Jerusalem

There has now been discovered an almost continuous 200-meter (656-foot) long fortified wall on the eastern slope of the City of David facing the Kidron Valley. Israel National News noted the archeological significance of this discovery:

“The new section that was exposed connects two sections that were previously excavated on the eastern slope. In the 1960s, British archaeologist Kathleen Kenyon uncovered a section of the wall in the northern part of the slope and dated it to the days of the Kingdom of Judah.

“About a decade later, archaeologist Yigal Shiloh uncovered a long section of the wall, in excavations in the southern part of the slope.

The newly discovered segment of the wall of Jerusalem from the first temple period.

“Over the years, claims have been made that despite the impressive nature of the remains, these remnant stone structures should not be seen as wall remains. However, with the uncovering of this new section that connects with these past discoveries, it seems that the debate has been settled, and that this was unequivocally the eastern wall of ancient Jerusalem.”

“Thou shalt arise, and have mercy upon Zion: for the time to favour her, yea, the set time, is come. For thy servants take pleasure in her stones, and favour the dust thereof. So the heathen shall fear the name of the LORD, and all the kings of the earth thy glory. When the LORD shall build up Zion, he shall appear in his glory.”

At the very time when Zion has begun to be restored, an archaeological discovery of the ancient wall of Zion, confirms the ancient kingdom of Judah with Jerusalem as its capital, it confirms the Jewish and Hebrew roots deep in that city, it confirms the prophets and kings of Israel. It confirms king David and the promises made to him by the Almighty. It confirms that these promises will be fulfilled and the kingdom will be restored again to Israel (Acts 1:6). Those that rejoice in these things, favour the dust and stones of Zion, which confirm the record of scripture, each stone telling its story of the ancient city.

This is the very wall where the watchmen of Zion stood in the time of Jeremiah and Isaiah. It is the very wall which Isaiah referred to when he said in Isaiah 62:6:
“I have set watchmen upon thy walls, O Jerusalem, which shall never hold their peace day nor night: ye that make mention of the LORD, keep not silence.”

As we witness this wall being discovered, let us stand upon the facts it has substantiated, and keep no silence, but sound the trumpet of truth, until the Almighty makes Jerusalem a praise in the earth.

This wall was the physical defence of the city and kingdom of ancient Judah. However, ultimately it is the Almighty God of Israel who was, is and will be, the defence and security of the people of God. Psalm 127:1 says, “Except the LORD build the house, they labour in vain that build it: except the LORD keep the city, the watchman waketh but in vain.”

The momentous discovery of this segment of wall of ancient Judah, is a reminder that the Almighty is the builder and defender of Zion. Zechariah 2:5 declares that He will be her defence and the glory in the midst of her.

“For I, saith the LORD, will be unto her a wall of fire round about, and will be the glory in the midst of her.”

This discovery reminds us of the promises to king David, it reminds us that God is building Jerusalem again, gathering the Jewish people from all over the earth, and finally it reminds us and the nation of Israel, that Yahweh is our strength, that He is our wall and that He will be the glory in the midst of Zion in the time to come.

“For the first time: an inscription from the time of the biblical Judges and relating to the Book of Judges has been recovered from excavations at Khirbat er-Ra‘i, near Qiryat Gat. The rare inscription bears the name ‘Jerubbaal’ in alphabetic script and dates from around 1,100 BCE. It was written in ink on a pottery vessel and found inside a storage pit that was dug into the ground and lined with stones.”

Judges 7:1 tells us that Jerubbaal was Gideon. Jerubbaal means “with whom Baal contends”. Judges tells us that Gideon was given this name because he broke down Baal’s altar. Judges 6:32 reads, “Therefore on that day he called him Jerubbaal, saying, Let Baal plead against him, because he hath thrown down his altar.”

Gideon was the one who stood up against the falsehood of Baal in Israel. Baal was shown to be powerless. He was shown to not be a god.

Jerubbaal was a unique name given to Gideon because of an argument put forward by his father, in Judges 6:31.

“And Joash said unto all that stood against him, Will ye plead for Baal? will ye save him? he that will plead for him, let him be put to death whilst it is yet morning: if he be a god, let him plead for himself, because one hath cast down his altar.”

As this was a unique name given to Gideon because of this incident, it seems all the more likely that this inscription refers to this Biblical judge from the same time. It also presents evidence of the incident when Gideon broke down the altar of Baal and shows that there was contention in the nation between the God of Israel and Baal.

The discovery of this inscription of this famous name, draws our attention and the attention of the nation of Israel, to the record of the life of Gideon and the book of Judges. It brings our attention to the “sin, suffer, seek, save” cycle of the Judges. It reminds us that in the time of the judges everyone did that which was right in his own eyes. These things remind us of our age. We must contend against the gods and idols of this age and put our trust in God’s unfailing word.

These two exiting discoveries brought before Israel from the dust, remind them of their biblical roots in the land. They remind them that there is a God in Israel and that he is working out His purpose!

Return next week God willing to www.bibleinthenews.com – this has been David Billington with you.