Bible in the News: Russia, Europe, Israel and Gas: Is Israel’s gas something Russia would come to take as spoil? 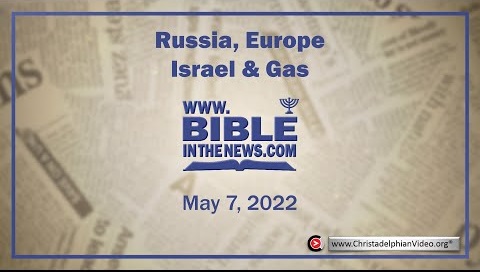 Russia, Europe, Israel and Gas
Is Israel’s gas something Russia would come to take as spoil?

Print
May 7, 2022 – Audio, 10.06 MIN
(Links at bottom of page to download free viewers.)
As Russia continues its aggression in the Ukraine it turns off the gas to parts of Europe. Europe responds seeking to ban Russian oil completely with plans underway to also ban Russian gas by the end of the decade. As all this unfolds, Israel eyes up the opportunities. In this weeks Bible in the News we consider these latest developments in the light of Bible prophecy.

The coming invasion of Israel by Russia

The prophecy of Ezekiel 38 teaches us that, before the Lord Jesus Christ returns, a confederacy led by Russia (v2) comes down from the North and attacks Israel.

The prophecy indicates that one of the reasons they do this is to take a “spoil” (v12 &13).

This is also mentioned in the parallel prophecy of Zechariah 14. Speaking of the same events God, through the prophet tells Israel that:
“Behold, the day of the LORD cometh, and thy spoil shall be divided in the midst of thee. For I will gather all nations against Jerusalem to battle…” (Zechariah 14:1-2).

The word translated spoil is the Hebrew word “šālāl”. The Brown-Driver-Briggs Lexicon tells us this means “prey, spoil, plunder, booty”. In other parts of the Bible it is used to describe desirable commodities taken in war – things such as garments, gold and silver (Joshua 7:21) ornaments (Judges 8:24, 25), flocks and herds (1 Samuel 30:20) and even people (Deuteronomy 20:14 and Judges 5:30).

Bible students have long wondered what this “spoil” is that will bring down Russia into Israel and we wonder if we are starting to get a glimpse of what this might be as we witness the problems with energy in Europe and the response by opportunistic Israel.

This week in our news we have witnessed the horrors of war. The spotlight has again been on Russian aggression in the Ukraine. Amongst other stories there has been a lot of attention on the Azovstal steel works in Mariupol where a few hundred Ukrainian soldiers who were defending Mariupol had retreated. This week it was reported that Russian troops had stormed the area.  Communications with the last Ukrainian defenders were lost amid fears Russia was using thermobaric warheads. It is thought that the Russians are a seeking major victory’s ahead of the 9th of May Victory Day military parade in Red Square in Moscow which celebrates victory over Nazi Germany in 1945. Despite Western media painting Russia out to not being as powerful as first thought, we are still witnessing the aggressive growing military might of the Rus in the “latter days” as predicted by prophecy.

Recently we’ve seen Russia use another aggressive tactic. EUNews ran a headline on the 27th of April which read: “EU accuses Russia of ‘blackmail’ as it cuts gas tap to Poland and Bulgaria”. The article reads: “European leaders on Wednesday branded Russia’s announcement it is cutting off gas supplies to Poland and Bulgaria as “blackmail” and praised EU solidarity as neighbouring countries step in. Gazprom, Russia’s state-owned gas company, informed both EU countries on Tuesday that it would halt gas supplies after they refused to pay for the deliveries in roubles — a measure Moscow imposed on so-called “unfriendly” foreign buyers in response to sanctions over its invasion of Ukraine. About half of Poland’s imported gas comes from Russia, according to Forum Energii, a think tank. The share rises even further for Bulgaria which gets at least three-quarters of its gas imports from Russia. Commission chief Ursula von der Leyen labeled Gazprom’s decision as “yet another attempt by Russia to use gas as an instrument of blackmail” in a statement on Wednesday morning. She added that it is “unjustified and unacceptable” but sought to strike a reassuring note, stressing that the 27-country bloc is “prepared for this scenario” and has “put in place contingency plans for just such a scenario and we worked with them in coordination and solidarity.”

Apparently the gas was again turned back on by Russia. But the warning shot was fired. Energy is being weaponised by Russia.

On Wednesday European Commission President Ursula von der Leyen announced the intent to cut itself off from Russian oil. “Today we will propose to ban all Russian oil from Europe. We will phase out Russian supply of crude oil within six months and refined products by the end of the year.” She announced.

There have also been discussions about Europe ceasing to buy Russian gas. This is a much harder challenge as Europe is so reliant on Russian gas. Apparently plans are afoot for EU to soon unveil plans  to end Russian gas imports by the end of the decade.

All of this uncertainty is being eyed with great interest by Israel who  , over the last few decades has discovered and begone to extract gas from vast gas fields discovered off its shoreline in the Levant Basin.

In an article published on March 29th by Reuters entitled “Israel-Turkey gas pipeline discussed as European alternative to Russian energy” the following was reported “A Turkey-Israel gas pipeline is being discussed behind the scenes as one of Europe’s alternatives to Russian energy supplies, but it will take complicated manoeuvring to reach any deal, government and industry officials in both countries say. The idea, first conceived years ago, is to build a subsea pipeline from Turkey to Israel’s largest offshore natural gas field, Leviathan. Gas would flow to Turkey and on to southern European neighbours looking to diversify away from Russia.”

On the 12th of April The Times of Israel ran an article entitled “As EU eyes stopping Russian fuel imports, Israel sees an opening for its natural gas”. In it it stated: “As Europe aims to wean itself off Russian fossil fuel because of the Ukraine invasion, Israel hopes to help fill the gap with gas from its offshore reserves… Israel could build one or more pipelines, potentially via Greece or Turkey, or increase the quantity of gas piped to Egypt to be liquefied and shipped off, say officials and experts.”

So we wonder. Is this the thing which might eventually bring down Russia to Israel? If the Israelis get their gas pipe in place it makes them a permanent competitor to Russia in the energy markets of Europe. Although Europe and Russia are at loggerheads at the moment Bible prophecy proclaims they will unite at some point in the future because the European people of Magog and Gomer are led by the Russians in Ezekiel 38 – and when that happens pipe lines coming from Israel would suddenly become a target which stands in the way of Russian ambitions.

The scene would be set for the “evil thought” of the invader to “come and take a spoil”.

But how things will exactly pan out we do not know. All we know is that we are in the “Latter days” the nations are being moved into position as the prophets have told us they would and events are leading up to the return of Zion’s king.

So we watch and we wait for the time when:
“the LORD shall be king over all the earth: in that day shall there be one LORD, and his name one.” Zech 14:9

Join us again next week, for another, Bible in the news.