Bible In the News: Russia in a corner, or ready to pull an ace? 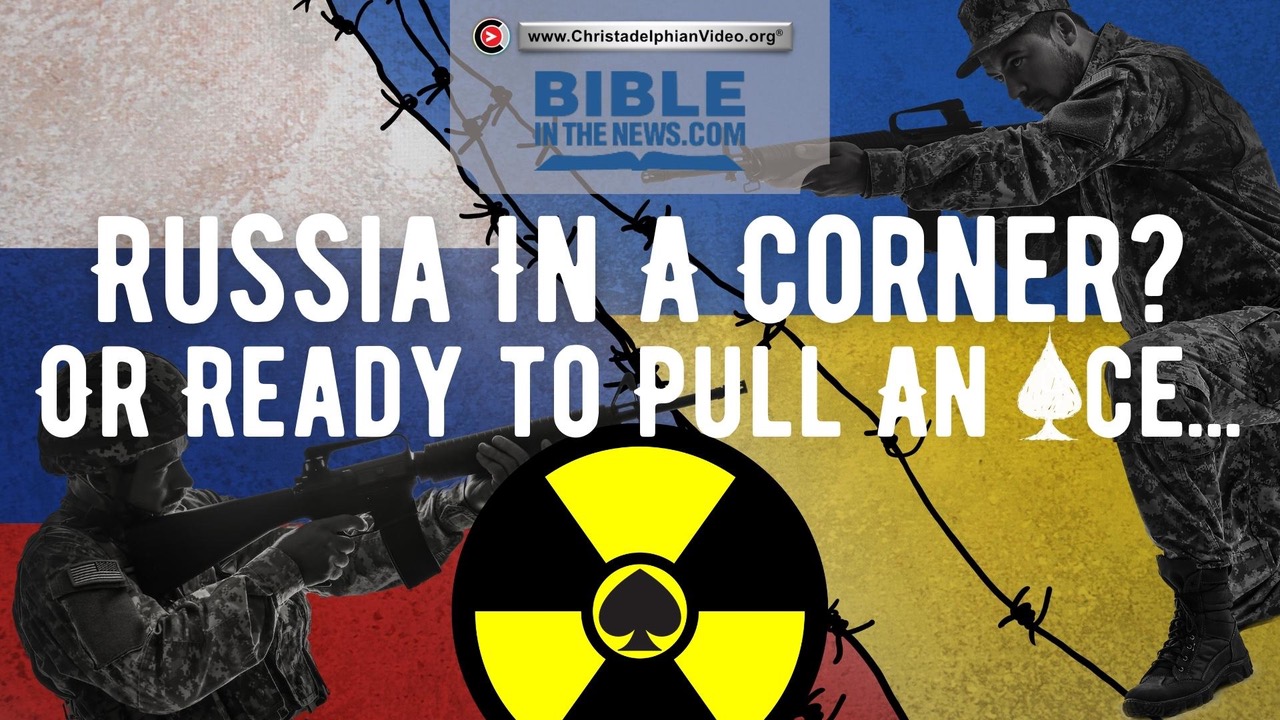 The West tries to ratchet up pressure on Russia…  But all the pressure seems to be building up on Europe!

As Bible believers, we look at events and see the hand of God.  God uses all these things to judge the nations and prepare the world for when he will transform it.  Here is an example of when God has used such things in the past:

“13 For I will punish them that dwell in the land of Egypt, as I have punished Jerusalem, by the sword, by the famine, and by the pestilence:” – Jeremiah 44:13

Who today is God using to wield the sword to bring his judgments?  We believe he is preparing Russia for this task, and beginning to them.  This is based on Ezekiel 38:

“And the word of the LORD came unto me, saying, Son of man, set thy face against Gog, the land of Magog, the chief prince of Meshech and Tubal, and prophesy against him,”  – Ezekiel 38:1-2

Some translations treat the word translated “chief” here as a proper name, such as the ASV where it shows up as “Rosh”:

“And the word of Jehovah came unto me, saying, Son of man, set thy face toward Gog, of the land of Magog, the prince of Rosh, Meshech, and Tubal, and prophesy against him,”  – Ezekiel 38:1-2, ASV

The collection of names here all combine to be Gog and his immediate dominion.  In short, Rus is an ancient name for Russia, and the territory includes much of eastern Europe.

There are others mentioned as “with thee” a few verses later.  One of these is “Gomer and all his bands”.  These can be located in Western Europe.

Currently, despite isolation and war losses, Russia is succeeding in putting pressure on Europe.  A recent article in The National Interest noted that “Paradoxically, the rising costs of war appear less sustainable for wealthy, democratic EU countries than they do for poor, isolated Russia.” and further into is commented: “Historians will look back on the Euro-Russian energy war as an example of how not to exploit politico-economic leverage. As the EU imposed ever-tougher sanctions on Moscow, plans to halt imports of Russian crude oil and natural gas were announced. Defense hawks had long advocated this, and centrist Europeans now agreed as a way to cripple Russia’s economy and strangle its war effort by denying it lucrative export earnings. “Fine,” the Russians replied, “We can speed up your transition to new energy sources by reducing the gas we ship you right now.” To which the EU’s panicked reply was “Wait, we won’t be ready to cripple you by halting gas imports until 2026! You’re blackmailing us!” Never pick up a grenade and brandish it at your enemy until you’re ready to use it—it just might blow up in your hand.”

Russia is not without its troubles from its war.  Ukraine is making gains as the world, especially the US, pumps billions of dollars worth of arms into its army.  The problem is that if Russia is backed into a corner, this could backfire.  Russia has many and varied tactical (lower powered) nuclear weapons and by all counts isn’t afraid to use them.  The us and by extension NATO has few with limited capability.  Russia seems to be of the opinion that if they use a small nuclear missile, the US is not likely to wipe out the entire city in response, escalating the situation to all-out nuclear war.

The opinion that if backed into a corner, Putin may well respond with a nuclear weapon is no longer a fringe opinion, but more like an accepted possibility.

As Putin builds up Russia, aiming to return it to its former glory, as prophecy requires it to do, Western Europe, which must be with him is finding a Russian noose around its neck in the form of Energy dependence.  Just as Russia is trying to exploit that noose to get its way, a massive drought has exaggerated tat pressure perhaps ten-fold.

The New York Times noted that “The dry summer has reduced hydropower in Norway, threatened nuclear reactors in France and crimped coal transport in Germany. And that’s on top of Russian gas cuts.”

Even Solar power is suffering from an insufficient power grid in Germany, and running inefficiently due to excessive heat where that isn’t an issue.  Even now, before the chilly winter that is expected to really put the pressure on Europe to bend to Putin’s will out of desperation Germany’s vice president is already calling to open the Nord Stream 2, as Putin had wanted them to do.

The end game for them is to be gathered for judgment as they attempt to seize on Zion.

“18 And it shall come to pass at the same time when Gog shall come against the land of Israel, saith the Lord GOD, that my fury shall come up in my face. 19 For in my jealousy and in the fire of my wrath have I spoken, Surely in that day there shall be a great shaking in the land of Israel; 20 So that the fishes of the sea, and the fowls of the heaven, and the beasts of the field, and all creeping things that creep upon the earth, and all the men that are upon the face of the earth, shall shake at my presence, and the mountains shall be thrown down, and the steep places shall fall, and every wall shall fall to the ground. 21 And I will call for a sword against him throughout all my mountains, saith the Lord GOD: every man’s sword shall be against his brother. 22 And I will plead against him with pestilence and with blood; and I will rain upon him, and upon his bands, and upon the many people that are with him, an overflowing rain, and great hailstones, fire, and brimstone. 23 Thus will I magnify myself, and sanctify myself; and I will be known in the eyes of many nations, and they shall know that I am the LORD.”  –Ezekiel 38:18-23

They will be like a hungry man who dreams he is eating but wakes up to find it was a dream and he is still hungry:

Their endeavors in this regard are completely unsuccessful.  It will be the “time of trouble such as never was” and all of the wicked will be judged.  The whole world is descending ever more rapidly into the abyss of wickedness and is ripe for judgment and all will receive it, wether at the hand of Gog or another way, as God says:

We long for the day when God’s kingdom is established, his law goes out from Zion his words from Jerusalem, and all the earth will be filled with his glory.

Please come back next week for more Bible in the News, God willing.