Bible In the News: Tarshish the leading voice against Rosh 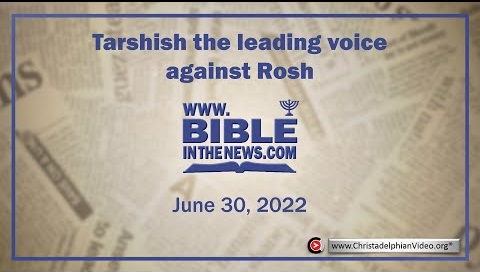 In recent events relating to Russia’s war in the Ukraine it is not the Western European nations making the biggest noise against Russia. The nation leading the way in protest against Russias invasion is arguably Britain as we might expect from Bible Propehcy

In the ‘latter day prophecy’ of Ezekiel 38, when the Jews have retuned to their land, it’s very clear that there are two sets of nations defined by God’s word.

One set attacks Israel. This is mentioned in verse 1-9 and is headed up by Gog of the land of Magog who is the leader of the Rus. As demonstrated in the Bible Magazine and in multiple Bible In The News’ posts in the past this refers to the leader of the peoples of Russia. According to the prophecy this leader, along with other nations leads an army down into Israel.

Another set of nations is mentioned in verse 13. This contains the ancient nations of “Sheba, and Dedan” which correlate to the peoples of the Gulf states and Saudi Arabia. Also mentioned with them is “the merchants of Tarshish” who, as we’ve demonstrated in the past, we believe refers to the power of Britain. This second set of nations challenges the invading set of nations. “Art thou come to take a spoil? hast thou gathered thy company to take a prey? to carry away silver and gold, to take away cattle and goods, to take a great spoil?” they ask.

As we observe current events in the light of Bible prophecy we cannot help be struck by how amazing it is that in recent events relating to Russia’s war in the Ukraine it is not the Western European nations making the biggest noise against Russia. The nation leading the way in protest against Russias invasion is arguably Britain.

It was Boris Johnson who was the first leader to visit the Ukraine after the war began and has visited a second time recently.

This week again we seen the antagonism between the UK and Russia hit our news headlines.

“If Putin was a woman”

On Wednesday 29th of June, The Guardian reported on a statement Boris Johnson, the British Prime Minister had given. It was entitled “Boris Johnson: Putin would not have invaded Ukraine if he were a woman”.

The report stated “Boris Johnson has claimed that Vladimir Putin would not have invaded Ukraine if he was a woman and believes that the war is a “perfect example of toxic masculinity”.

In an interview with German media following the G7 summit in Schloss Elmau, the prime minister cited the Russian president’s gender as a contributory factor to the conflict.

Johnson told broadcaster ZDF: “If Putin was a woman, which he obviously isn’t, if he were, I really don’t think he would have embarked on a crazy, macho war of invasion and violence in the way that he has. “If you want a perfect example of toxic masculinity, it’s what he is doing in Ukraine.””

In response Russia summoned the UK ambassador. The BBC, in a post on Thursday 30th, entitled ”Moscow rebukes UK ambassador over PM’s ‘offensive’ comments” it was reported that “Russia has summoned the British ambassador in Moscow to protest against Prime Minister Boris Johnson’s “offensive” remarks about President Vladimir Putin, a Russian foreign ministry statement said. Deborah Bronnert was told that Russia “firmly” opposed the “openly offensive comments by the British authorities towards Russia, its leader, its officials as well as the Russian people”, the AFP news agency reported the ministry as saying.”

“We’ve got to show our pecs”

Another bizarre incident was reported by various news outlets about comments Boris Johnson had made at the G7 meeting. ITV.com published a report entitled “’We’ve got to show our pecs’ Johnson mocks Putin’s topless photos during G7 meeting”. The report went on to say: “Boris Johnson cracked jokes about Russian President Vladimir Putin’s habit of posing for topless photographs with Canada’s Justin Trudeau at the G7 summit on Sunday. The prime minister and his Canadian counterpart discussed the Russian leader and his bizarre history of being photographed without a shirt. With the sun shining in the Bavarian Alps, where the G7 leaders were meeting, Mr Johnson questioned whether they should keep their suit jackets on. Warming to his theme, he then said, “shall we take our clothes off?”, suggesting “we all have to show that we’re tougher than Putin.” Boris Johnson’s message to his critics – he’s not going anywhere
Mr Trudeau joined in, referring to a “bare-chested horseback ride” – Mr Putin was pictured shirtless riding a horse in 2009. Mr Johnson then said: “We’ve got to show our pecs.“”

In response to this, Russian President Vladimir Putin responded.


Tarshish leading the support for Ukraine

At a recent Nato meeting the UK came out in huge support of the Ukraine. The BBC reported that “The UK will provide an additional £1bn in military aid for Ukraine, a near-doubling in its support for the fight against the Russian invasion. The new funding takes the military aid given to Kyiv to £2.3bn – and the UK has also spent £1.5bn in humanitarian and economic support for Ukraine. Boris Johnson, speaking at a Nato summit in Spain, said the “cost of freedom” is “always worth paying for”. The PM also committed to raising defence spending to 2.5% of GDP.”

It was also this week we saw this headline by the BBC on the 27th June: “Ukraine war: The price of freedom is worth paying, says Boris Johnson”

The report stated:
“The price of freedom is worth paying,” Boris Johnson has said when asked about the cost of helping defend Ukraine. Speaking from a G7 summit, he argued that letting Russia “get away with” invading Ukraine would have “chilling” consequences and lead to instability. Likening the conflict to defeating Nazi Germany in World War Two, the PM said that war had been “very expensive” but delivered “long term stability”.”


The Destiny of the Nations

So we can see then that the leading voice against Russia is Britain. The European powers are destined to ultimately fall under Russian control as the prophecy of Ezekiel 38 tells us this will occur at some stage. How it will happen we do not know – but we have confidence in the word of God. The Tarshish power though is destined to be part of that separate set of nations who will eventually challenge Russia in that fateful day when they invade Israel: “Art thou come to take a spoil”?

The abrasive relationship between these two nations then is a sure sign of the times.

Ultimately though all nations will bow to the coming Messiah – The Lord Jesus Christ. He is soon to return just as these prophecies predict he will.

In that day “the mountain of the LORD’S house shall be established in the top of the mountains, and shall be exalted above the hills; and all nations shall flow unto it. And many people shall go and say, Come ye, and let us go up to the mountain of the LORD, to the house of the God of Jacob; and he will teach us of his ways, and we will walk in his paths: for out of Zion shall go forth the law, and the word of the LORD from Jerusalem. And he shall judge among the nations, and shall rebuke many people: and they shall beat their swords into plowshares, and their spears into pruninghooks: nation shall not lift up sword against nation, neither shall they learn war any more.” Isaiah 2:1-4

So we watch and we wait for the return of Jesus. These signs of the times strengthen our faith that God is in control and soon His Kingdom will be restored on the earth.
This has been Matt Davies with you. Join us again next week, God willing, for another Bible in the News.