Bible In the News: Technology and the Battle for the Mind’ 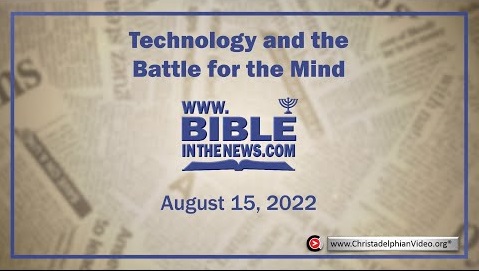 (Links at bottom of page to download free viewers.)
Pew Research’s latest technology survey released last week shows that smartphone and social media use is almost universal among teens, who use the Internet daily, many almost constantly. Studies show that the constant interruption of our thoughts limits deep learning and critical thinking making us susceptible to believing false information. Technology companies are determining the way people think and it is time to put down our smartphones, to take back control and to refocus our minds on developing the mind of Christ. (Note that the audio and print editions contain some different, but complementary information).

This past week CNN reported on the results of the Pew Research survey:

Nearly half of all teens say they use the internet ‘almost constantly,’ survey finds

“Nearly half of US teens say they use the internet ‘almost constantly,’ according to a new survey released on Wednesday.

The survey of 1,316 teenagers delved into the technology habits of teens and was conducted by the Pew Research Center.

The percentage of teens who reported a near constant level of online presence was markedly up from a 2015 Pew survey in which only about a quarter of teens reported that level of internet use.

The survey found that the social media platforms most frequently used by teens are changing as well, with video-focused platforms like YouTube and TikTok leading in popularity.

Facebook is no longer such a dominant force in the lives of American teens, according to the new survey. Only 32% of US teens ages 13 to 17 say they now use Facebook. That’s down from the 71% of teens who said they used Facebook in a Pew survey conducted between 2014 and 2015.

Once the most popular social media platform for younger users by a long shot, Facebook has now been surpassed by YouTube, TikTok, Instagram and Snapchat, according to Pew.

YouTube, in particular, was used by 95% of teens, according to the survey, with nearly 20% reporting near constant use of the platform, making it the most popular social network, followed by TikTok. Of teens who used TikTok, nearly a quarter reported near constant use…

“…the new survey finds that the vast majority of teens have access to digital devices, such as smartphones (95%), desktop or laptop computers (90%) and gaming consoles (80%). And the study shows there has been an uptick in daily teen internet users, from 92% in 2014-15 to 97% today. In addition, the share of teens who say they are online almost constantly has roughly doubled since 2014-15 (46% now and 24% then).

Adult smartphone use is equivalent to teens

Although this survey focuses on teens, the affects of technology on adults are similar. No one is exempt. Nicholas Carr, a professor of sociology at Williams College in Massachusetts and former executive editor of the Harvard Business Review, noted in a lecture in 2015 that:

“If you look at studies of teenagers on their phones texting, you find that the average teenager sends or receives about 3,300 texts a month—these days for teenage girls it’s actually over 4,000 texts a month—and that breaks down to one text about every six minutes throughout your entire waking life. If you think adults show any more restraint around their gadgets, well forget it. The latest studies of how often an adult will pull out his or her smartphone to look at it during the course of the day indicates it is about a hundred and sixty times which works out to about once every six minutes during your waking life. As we know, from an email study, that is almost surely an understatement since people consult their phones, consult the internet, consult social media all the time without even consciously realizing they are doing it.”

We can see that such a saturation of society by this technology facilitates a profound impact on human behaviour, on the ideas that we are exposed to, on what we think, and how our brains develop without the user being aware. Indeed, this fact has come under increased scrutiny in recent years following abuse of this capability to manipulate the masses.

Suicide rates for ages 10-24 from 2000-2017 corelated to social media and smartphone adoption.

For some time we have been warned that these social media apps are engineered to addict and manipulate its users through the release of the feel good chemical dopamine. This exploitation of human psychology was exposed in the documentary the Social Dilemma released last year following ex-tech company leaders speaking out. For example, last year Facebook whistleblower Frances Haugen testified to governments on the mental health issues that Facebook was allegedly ignoring, putting profits before taking meaningful steps to deal with teen suicide and other big issues that the platform is amplifying. It has been shown that the rise in teen suicide is corelated to the rise in use of social media.

While there are positive aspects to our modern digital world, there are also other reasons for serious concern. The fire hose of information presented by the Internet, in the context of technology designed for constant interruption, has resulted in difficulty concentrating, challenging deep learning and critical thinking, making us more receptive to false or inaccurate information:

“The brain’s capacity is not unlimited. The passageway from perception to understanding is narrow. It takes patience and concentration to evaluate new information—to guage its accuracy, to weigh its relevance and worth, to put it into context—and the Internet, by design, subverts patience and concentration. When the brain is overloaded by stimuli, as it is usually is when we’re peering into a network connected computer screen, attention splinters, thinking becomes superficial, and memory suffers. We become less reflective and more impulsive. Far from enhancing human intelligence, I argue, the Internet degrades it” – The Shallows: What the Internet is Doing to Our Brains, Nicholas Carr (2020 edition).

In his book, The Shallows, Nicholas Carr warns that we are becoming slaves to technology, where it is determining what we are looking at and thinking about. The social media platform TikTok is a great example of this. TikTok is using artificial intelligence to present the user with an endless stream of videos based on what it thinks the user will want to watch without the user doing anything!

Developing a new way of thinking

For servants of Jesus Christ, it should be easy to discern that this is the opposite of what we want in developing a new way of thinking that will lead to eternal life. The Spirit’s words through the apostle Paul provide our point of reference, saying: “Let this mind be in you, which was also in Christ Jesus” (Philippians 2:5). Paul also wrote:

This is what is needed to develop a healthy Godly mind. The human heart is deceitful and wicked, therefore binging on what we want will amplify our main problem, a natural appetite for evil:

“For out of the heart come evil thoughts, murder, adultery, sexual immorality, theft, false witness, slander. These are what defile a person” (Matt. 15:18-20 ESV).

“The heart is deceitful above all things, and desperately wicked: who can know it?” (Jer. 17:9).

“But every man is tempted, when he is drawn away of his own lust, and enticed. Then when lust hath conceived, it bringeth forth sin: and sin, when it is finished, bringeth forth death” (James 1:14,15).

We are trying to chart a different course than the rest of society:

“Let no one deceive himself. If anyone among you seems to be wise in this age, let him become a fool that he may become wise. For the wisdom of this world is foolishness with God… ‘The Lord knows the thoughts of the wise, that they are futile.’ Therefore let no one boast in men…” (1Cor. 3:18-20 NKJV).

Technology, in particular the Internet and Social media, is diverting our attention away from God. We must push back, rather than being “…lovers of pleasures more than lovers of God” (2Tim 3:4), for the sake of eternal life:

“He who walks with wise men will be wise, But the companion of fools will be destroyed” (Proverbs 13:20 NKJV).

“No servant can serve two masters, for either he will hate the one and love the other, or he will be devoted to the one and despise the other.” (Luke 16:13 NKJV).

The closing of the university mind

At the same time as technology is degrading human intelligence and critical thinking, and being used to spread misinformation, schools are removing books from their libraries that do not fit the woke agenda they are pushing. We have seen this in public elementary and high schools, and it is also happening in universities. Just last week, Melanie Phillips highlighted this issue:

“The Times reported this week on the deeply alarming findings of a survey it had conducted at Britain’s universities.

It found that ten of them, including three from the elite Russell Group, had started removing books from reading lists or made them optional to protect students from ‘challenging’ content, and had applied trigger warnings to more than 1,000 texts in case they ’caused students harm’.”

After noting the cancel culture that is accompanying this, Phillips concludes:

“These findings are shocking; but no-one who has been paying attention to what’s been happening to education in both Britain and America will find them surprising. On both sides of the Atlantic, the universities — with some exceptions, and with “hard” science departments exempt to some extent at least — have been steadily substituting knowledge and rational thought by ‘victim culture’ and ideological identity politics on race and gender, turning themselves into left-wing bastions of propaganda and the suppression of dissent.”

What can we do?

To reverse the current trend we should remember the basics of developing faith, while removing ourselves and our children from distractions and godless thought as much as we can:

“Be not conformed to this world: but be ye transformed by the renewing of your mind, that ye may prove what is that good, and acceptable, and perfect, will of God” (Rom. 12:2).

“Knowing this, that our old man is crucified with him, that the body of sin might be destroyed, that henceforth we should not serve sin. For he that is dead is freed from sin” (Rom. 6:6,7).

“That ye put away, as concerning your former manner of life, the old man, which waxeth corrupt after the lusts of deceit; and that ye be renewed in the spirit of your mind, and put on the new man, which after God hath been created in righteousness and holiness of truth” (Eph. 4:22-24).

Nicholas Carr leaves us with some powerful ways to mute the influence of technology on our mind and on our emotions, helping to reverse the loss of our brain’s ability to engage in attentive and contemplative thinking (which is so important for developing the mind of the spirit):

This has been Daniel Billington with you for this week’s Bible in the News. Let us push back against the ungodly tidal wave that is pushing against us and instead give our hearts and minds to our God without distraction, so that we might learn His ways and find grace in his sight when we stand before His Son.