Bible In the News: The people of the Rus are growing their army 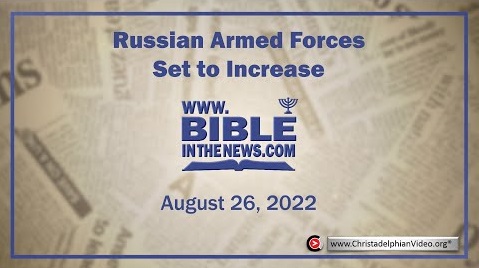 Russian armed forces set to increase
The people of the Rus are growing their army – unknowingly gearing up for the return of Christ.

Listen in MP3 Format
August 26, 2022 – Audio, 12.47 MIN
(Links at bottom of page to download free viewers.)
Russia is set to increase its military personnel size indicating a commitment to war. It also believes its military equipment is superior to its rivals. All of this is what we’d expect living in the time before Jesus Christ returns.

Bible prophecy is amazing. In the prophecy of Ezekiel 38 the prophet describes events far ahead of his day. He was prophesying around the year 600BC at a time when his people of Israel were in captivity to the Babylonians. Through God’s power, he tells of a time when Israel would eventually return again to their homeland.

Remarkably this prophecy has been being fulfilled since the declaration of Israel as an independent state in 1948. Since then the Jews have been returning to their ancient homeland in ever increasing numbers.

What is most fascinating about the prophecy is the depiction of the events which will eventually bring about the Jews and the world in general’s understanding of God. We read at the end of the prophecy these words of God “Thus will I magnify myself, and sanctify myself; and I will be known in the eyes of many nations, and they shall know that I am the LORD.” (v23).

How will God be known?

What brings this about? An invasion of God’s people of Israel from a number of nations whose armies are roundly defeated by His power. We read of their demise in verses 18-23.

Who are these nations? Well they are described by their ancient names in verses 1-9 and we’re told they are led by a mysterious character called Gog.

Gog is “of the land of Magog, prince of Rosh, Meshech, and Tubal” v2 (Youngs Literal Translation).

Why has this been written?

So why would God cause this prophecy to be revealed we wonder? It clearly would have little relevance to the people of Ezekiel’s day. It would of course encourage them to know that eventually their nation, and the nations of the world, would get to know the living God but what relevance would these details be to them?

We submit that these prophecies of old have been written for the discerning believer living in the times they depict.

We read in 2 Timothy 3:16-17: “All scripture is given by inspiration of God, and is profitable for doctrine, for reproof, for correction, for instruction in righteousness: That the man of God may be perfect, throughly furnished unto all good works.”

So this scripture then is useful to believing people living in the time period when the Jews have returned to their land. It must be understandable by them – else why would God have caused a prophecy of this nature to be written and preserved down through time?

Believers with this faithful mindset then seek to understand the revelation from God in the prophecy relating to their day. And when we examine the names of the ancient nations we realise that Gog is the leader of the Rus or in the Hebrew the Rosh. The ancient people of the Rus have become the modern nations of Russia, Ukraine and Belurus. Mesech and Tubal are ancient names for territories which exist in the Russian territory today.

We are also told of allies who assist Gog in his invasion. These come from the areas of central and western Europe, North Africa, the Turkic nations and Iran. Its a huge alliance which comes down upon Israel.

When we look up from our Bible and look at current events, what do we see? We see a rising Russian power seeking to dominate the Ukraine and Europe. We see a fearful, energy starved Europe struggling with the cost of living. Some commentators are already saying it might not take much for the likes of Germany to change its stance on Russian aggression. We see Iran and many African countries allied with Russia. We also see a growing hostility towards Israel.

An aggressive and powerful Russia with an autocratic leader is exactly what we would expect to see as events unfold which will lead to the great invasion prophesied.

The Bible in the News

In the news this week then it is interesting to note that Russian President Vladimir Putin plans to grow his army.
Aljazeera ran an article on the 25th of August entitled: “Putin signs decree to increase size of Russian armed forces” President orders Russian military to increase its number of soldiers by 137,000 to a total of 1.15 million.” The article stated: “The decree issued on Thursday will boost the overall number of Russian military personnel to 2,039,758, including 1,150,628 servicemen. A previous order put the military’s numbers at 1,902,758 and 1,013,628 respectively at the start of 2018… All Russian men aged 18-27 must serve one year in the military but a large share avoids the draft for health reasons or deferments granted to university students. The share of men who dodge the draft is particularly big in Moscow and other big cities. The Russian military rounds up draftees twice a year, starting on April 1 and October 1. Putin ordered the drafting of 134,500 conscripts during the latest spring draft earlier this year and 127,500 last autumn.”

The BBC also reported this in their article entitled “Putin orders 10% boost in Russian troop numbers”.

The New York Times reported “Vladimir Putin ordered a sharp increase in the size of Russia’s armed forces yesterday, signaling a lengthy commitment to the war in Ukraine. The Russian president raised the target number of active-duty service members by about 137,000, to 1.15 million, as of January of next year. He also ordered the government to set aside money to pay for the growth. Some analysts described the move as a clear signal that, after a full six months of fighting, Putin had no plans to relent.”

Much to the Western medias surprise it also would seem that Russia believes its army is superior to others. The medias narrative is that the war in Ukraine has not gone to Russian plans. This is, of course, an assumption. If a longer and larger strategy is at play by the Russians to cripple Europe then it might be going exactly to plan.

So we can see then a powerful and confident Russia emerging on the world scene. Resisting pressure from the West and forging its own way as a leader on the world stage. This is to be expected in the light of Bible prophecy.

Not all the pieces are in place just yet but we can expect Russia to be victorious in dominating the Ukraine and bringing the rest of Europe to its heel. Perhaps the rising energy crisis will assist in this. Perhaps an incident in Taiwan will weaken the dominance of the USA and pave the way for an even more dominant Russia. We will wait and watch to find out. The end result has been revealed in the scriptures. An alliance will take place of the Russian, European, North African and far Eastern peoples and an invasion will take place against Israel where God will act to save His people.

The return of Jesus Christ

As Christadelphians we believe that the way that God will act in that great day will be through the return of His son, Jesus Christ. We read in prophecies like Zechariah 12 and 14, Daniel 2 and 11, and Acts 1 of how Jesus will return and save the Jews from the invading army. As a descendent of the Jewish King David (Luke 1:32) he will reestablish the throne of the kingdom of Israel (also called the Kingdom of God – see 1 Chronicles 28:5 and Daniel 2). This will usher in a whole new world order based on God’s righteousness.

So we watch and we wait as we see the day fast approaching when God’s kingdom will come and His will be done on the earth as it is done in heaven.

That day when it is said of the Messiah that “he shall judge among the nations, and shall rebuke many people: and they shall beat their swords into plowshares, and their spears into pruninghooks: nation shall not lift up sword against nation, neither shall they learn war any more.” (Isaiah 2:4)

And we hope that alongside the apostle Paul we might be able to say “Henceforth there is laid up for me a crown of righteousness, which the Lord, the righteous judge, shall give me at that day: and not to me only, but unto all them also that love his appearing.” (2Timothyi 4:8)

As those who do look for that appearing we are so thankful to God for revealing the details of our day through His prophets. Recording these details so that we can have confidence in His supremacy and the coming of His Kingdom on the earth.

Thank you for joining us for another Bible in the News. Tune in next week as we continue to watch the signs of the times in the light of Bible prophecy.