Bible in the News: The Tragedy in Ukraine, a Precursor to the Invasion of Israel 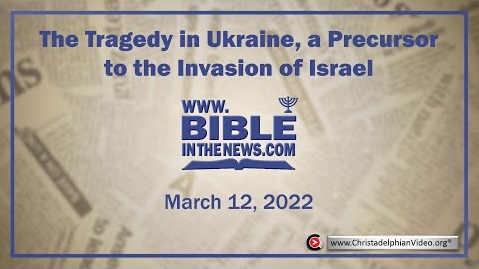 The Tragedy in Ukraine, a Precursor to the Invasion of Israel
–

Print
March 12, 2022 – Audio, 43.00 MIN
(Links at bottom of page to download free viewers.)
The West have shown themselves unable to do anything to prevent Russia from invading Ukraine. Instead they can do nothing but stand by and watch, asking why Putin is doing this, words they will echo when they ask “Art thou come to take a spoil”

This week we are joining you from the city of Tiberias, on the western shore of the Sea of Galilee.

It is impossible to look over the sea of Galilee within casting your mind back to the amazing events that occurred in this very place, in fact when you look over the Sea of Galilee you are seeing the locations of over half of the recorded miracles of the Lord Jesus Christ.

Looking up to the north in the distance you can see Capernaum, the place Jesus chose to make his home during his ministry, the place he chose to be the centre of his ministry, the place where he called many of his disciples while they were repairing their nets by the shore,  the place where the first and second miraculous catches of fish occurred, where the woman touched the hem of his garment and was healed of her issue of blood, the place where the paralytic man was let down through the broken roof, where Jairus’ daughter was brought back to life, to name but a few. Looking across the lake you can see the land of the Gadarenes, where Legion made his home among the tombs and was healed by Jesus leading to the herd of swine running down into the Sea of Galilee. Less than 5 miles up the coast is Magdala, the home town of Mary Magdalene from whom Jesus cast out seven demons, the place where the Pharisees and Sadducees come to tempt him, and Jesus answers “When it is evening, ye say, It will be fair weather: for the sky is red. And in the morning, It will be foul weather to day: for the sky is red and lowering. O ye hypocrites, ye can discern the face of the sky; but can ye not discern the signs of the times?”

When looking at these places you can also find yourself thinking ahead to the events that are in store of this land, especially in light of the tragedy that is unfolding in Ukraine, because the sad truth that what is happening there will one day happen here to our brethren, the house of Israel. But what we are seeing today is how the leader of people of the Rus or Rosh treats his own, those who he sees as his people, fellow members of the people of the Rus. When the leader of the people of the Rus gathers that confederacy together, they will not be coming against people they see as their brethren, they will be coming against people they see as their enemy, who they will see as an oppressor and an occupier.

We know some of the things that will happen during Gog’s invasion of Israel from prophecy. We are told in Zech 14, which is a parallel prophecy to Eze 38, that at the time when all nations will be gathered against Jerusalem to battle, the city will be taken, the houses rifled, and the women ravished. We are told that half the city will be taken into captivity, and there will be but a residue left in the city.

In Joel 3 (another parallel prophecy to Eze 38) – we are told that all nations are gathered to the valley of Jehoshaphat and God will plead with them because of how they had treated his people and his land.

3 For, behold, in those days, and in that time, when I shall bring again the captivity of Judah and Jerusalem,

2 I will also gather all nations, and will bring them down into the valley of Jehoshaphat, and will plead with them there for my people and for my heritage Israel, whom they have scattered among the nations, and parted my land.

3 And they have cast lots for my people; and have given a boy for an harlot, and sold a girl for wine, that they might drink.

And God has a special message for those who are in the coasts of Palestine (the Gaza strip) and those in Tyre and Zidon (Lebanon), for what they have been allowed to do to his people Israel.

4 Yea, and what have ye to do with me, O Tyre, and Zidon, and all the coasts of Palestine? will ye render me a recompence? and if ye recompense me, swiftly and speedily will I return your recompence upon your own head;

5 Because ye have taken my silver and my gold, and have carried into your temples my goodly pleasant things:

6 The children also of Judah and the children of Jerusalem have ye sold unto the Grecians, that ye might remove them far from their border.

And when we think back through history there hasn’t been a time when God’s people have been sold to those of Greece, and so logically this must be something that Gog, when he invades, allows those of the coasts of Palestine to do. And notice, the reason they are sold is not for money, we are told it is “that ye might remove them far from their border”, something I believe will be one of the aim’s of Gog’s military conquest.

When we come to Ezekiel 38:10 we see that Gog has an “evil thought”, “And thou shalt say, I will go up to the land of unwalled villages; I will go to them that are at rest, that dwell safely, all of them dwelling without walls, and having neither bars nor gates”

And why is it that he does this?

12 To take a spoil, and to take a prey; to turn thine hand upon the desolate places that are now inhabited, and upon the people that are gathered out of the nations, which have gotten cattle and goods, that dwell in the midst of the land.

What exactly this spoil is has been discussed extensively throughout the years, while little discussion has been focused on what the “prey” in this verse is. But I believe we are told within this very verse what both the “spoil” and the “prey” are; for it is says, “to take a spoil, and to take a prey;” – and how will they do this? – by turning their hand upon the desolate places that are now inhabited, and upon the people that are gathered out of the nations. The desolate places are the spoil, the holy land and the holy places, and the prey are those who have been gathered out of the nations, the people of Israel.

In Joel 3 we read “prepare war” – the Hebrew here is to “sanctify war” or “to make a holy war”. The war against Israel will not be purely an economic war, it will be a religious war, a holy war against God’s people.

God will plead with Gog’s confederacy for parting his land, and in Zech 1:1 we read that at the time when all nations are gathered against Jerusalem to battle the spoil will be “divided in the midst of thee” – and here for “divided” is the same word used for parting God’s land in Joel 3.

When we look at the things that God pleads with the nations for, we can certainly link some of them to events that are already in the past, especially when we think of the time when the Roman Empire scatted the Jewish People throughout the world.  But just as Gog will be the standing up of the entire image of Daniel 2, I would suggest that Gog will also be the manifestation of these things done against God’s people, for he will all of these ancient empires into one, and come against Israel.

And so as we see Russia pushing to build up that image empire, Putin himself, actually stating that he wants to do so because they are the people of the Rus, the people of Rosh, who he wishes to unite. We know from prophecy that the Rosh will lead the confederacy that come against God’s people. And so as we see these things, as tragic as they are, let us remain hopeful, because they are sure signs of the times, pointing towards to time when the world will be in peace, when men shall beat swords into ploughshares and spears into pruning hooks, and men shall learn war no more.