Israel prospers in the face of Russian aggression in Ukraine. 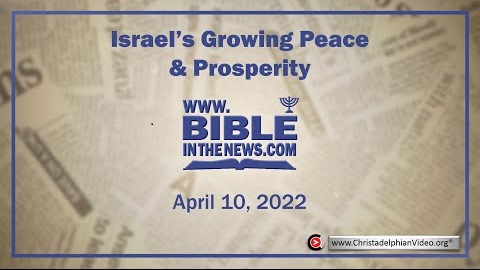 Israel’s Growing Peace & Prosperity
Israel continues to prosper in the face of Russian aggression in Ukraine.

The repercussions of Russia’s invasion into Ukraine are being felt around the globe. Israel is no exception. Ukrainian Jews, among those fleeing the conflict, are getting in line to immigrate to Israel. In Israel there is growing concern about the nation’s future relationship with Russia. It now has permanent military bases in Syria to the north and Russia is a key player in the nuclear negotiations with Iran. Meanwhile, Israel is making peace with its Arab neighbours and is positioned to benefit greatly from tightening global natural gas supply and its ability to offer alternative energy security to countries concerned about Russia. On April 1st, Israel and the United Arab Emirates announced the completion of negotiations and the signing of a “milestone” free-trade agreement.

Against my people of Israel

To begin, let’s consider the impact on Israel of Russia’s invasion into Ukraine, as well as the nuclear negotiations with Iran…
The Bible informs us that the nation of Israel will find itself in a latter day calamity, at which time God says, Gog will “come up against my people of Israel, as a cloud to cover the land” (Ezekiel 38:16). Therefore, it is clear that Russia, in alliance with Iran, will be hostile to Israel. This is not unexpected even from a purely human point-of-view.

In this light, Israel is rightly worried about the position Russia may take toward its bombing of Iranian backed forces in Syria which continue to threaten Israel’s security, particularly in the Golan Heights. If Russia can invade a sovereign state like Ukraine, could it happen to Israel? Sadly, the answer is yes, it will happen.

This is the situation presented in Ezekiel 38 following the invasion of the mountains of Israel by the Russian confederation:

“thou shalt think an evil thought: and thou shalt say, I will go up to the land of unwalled villages; I will go to them that are at rest, that dwell safely, all of them dwelling without walls, and having neither bars nor gates, to take a spoil, and to take a prey; to turn thine hand upon… the people that are gathered out of the nations… Sheba, and Dedan, and the merchants of Tarshish, with all the young lions thereof, shall say unto thee, art thou come to take a spoil? hast thou gathered thy company to take a prey?” (Vs. 10-13).

This is precisely how such circumstances could replay, with nuclear powers including Russia (and possibly Iran by this time) invading Israel and taking Jerusalem to “liberate” the Golan and the “holy places”, while “Sheba and Dedan” (the Arabian gulf states), with the western “merchants of Tarshish, with all the young lions” (Britain, the United States, Canada, Australia, New Zealand, and perhaps India) standing to one side, immobilized, merely questioning the invaders intentions.

Journalist Melanie Phillips made precisely this conclusion in her analysis of the Iran nuclear deal, Israel is the fall guy over sanctions on Putin (The Times, 2022-03-21):

“Under the reported terms of this deal, the Biden administration will make Putin the effective gatekeeper for Iran’s nuclear programme. Worse still, the US proposes to enable Russia to set up a sanctions evasion hub in Iran. This is because Russia’s state-controlled energy company, Rosatom, is set to cash in on its $10 billion contract to expand Tehran’s Bushehr nuclear plant.”

If this is what is agreed upon it will be astounding in human terms, especially after Russia’s invasion of Ukraine, but it is perfectly aligned with the prophetic picture. Phillips continues:

“Ukraine’s fate demonstrates that, when a despotic power has nuclear weapons, the world’s ability to stop its atrocities is all but paralysed. Despite this fact, the Biden administration is set upon a course that will enable terrorist Iran to become a nuclear power.

“Furthermore, it’s hard to imagine that, were missiles to start raining down on Haifa or Tel Aviv from Lebanon or Tehran, there would be an outpouring of support from the West equivalent to the emotion being expressed over Ukraine.”

Phillips is correct in that it is not the West who will save Israel. It will be the Holy One, who will intervene and cause the Russian, European, Iranian confederacy to fall upon the mountains of Israel (Eze. 38:22; 39:1-4,6-7) and “he shall come to his end, and none shall help him” (Dan. 11:45).

At rest and prosperous

It is clear from Ezekiel 38 that when these events occur, Israel will have become both peaceful and prosperous. We have witnessed Israel’s increase in prosperity, accelerated more recently by development of the newly discovered natural gas fields in the eastern Mediterranean, as well as progress toward “normalization” with other Arab states. The prophets describe the invasion in the latter days of not only a prosperous Israel, but also a prosperous region including Egypt:

“…the people that are gathered out of the nations, which have gotten cattle and goods…

“Behold, the day of the LORD cometh, and thy spoil shall be divided in the midst of thee. For I will gather all nations against Jerusalem to battle…” (Zech. 14:1-2).

“He shall enter also into the glorious land, and many countries shall be overthrown: but these shall escape out of his hand, even Edom, and Moab… He shall stretch forth his hand also upon the countries: and the land of Egypt shall not escape. But he shall have power over the treasures of gold and of silver, and over all the precious things of Egypt…” (Dan. 11:41-43).

This is what we are seeing develop today despite Russia waging war in Europe, and ongoing tension with some Arabs. Peace and prosperity is accelerating between Israel and its Arab partners. Ben Lynfield, wrote the following for foreignpolicy.com (2022-01-31) earlier this year under the heading Israel’s Rewarding Road to Normalization, “A little over a year after the Abraham Accords, Israel and its new Arab partners are seeing dividends”:

But normalization has created a new world of opportunities for Israel to finally taste being part of the region… The siege of Arab enmity, which was undermined but not broken by earlier peace agreements with Jordan and Egypt, appears to be retreating.

Even with Saudi Arabia, seen as the biggest prize, things are edging ahead, with Israeli companies cooperating with Saudi counterparts ‘in different ways, shapes, and forms,’ Benjamin said, adding it would take more time for diplomatic ties to ensue.

Normalization—the creation of formal economic, diplomatic, security, and other ties—has changed Israel’s relations with part of the Arab world.”

Concern over the direction of Iran and its proxies has added impetus to the development of these relationships as Christadelphians have expected for over a century!

“Israel’s economy grew at its fastest pace in 21 years in 2021 as consumer spending, exports and investment rebounded with double-digit gains following a pandemic-stifled 2020, raising the spectre of the central bank raising interest rates soon… Private spending jumped 19.2%, while exports surged 26.3% and investment grew 14.1%.”

Israel’s growth was well above the average of 5.3% for the 38 countries that make up the OECD! Part of this success is coming from Israel’s increasing sales of natural gas to Egypt.

These headlines are now commonplace. On April 1st, Israel and the United Arab Emirates announced the completion of negotiations and the signing of a milestone and historic free-trade agreement. It is now to be ratified by each of the countries.

Late in March timesofisrael.com reported, Egyptian FM to join upcoming ‘historic’ Abraham Accords summit in Israel (2022-03-26). The subheading noted, “Efforts also said underway to draw Jordanian top diplomat for gathering with foreign ministers from the UAE, Bahrain, Morocco, US”. We believe Jordan can play a role as modern Moab, a nation that will escape out of the northern invaders hand (Dan. 11:41) and is also seen to be friendly to Israel in the day of its calamity (Isa. 16:4). The article also reported military cooperation due to the shared concern over Iran and its nuclear ambitions:

“A Channel 12 report on Friday linked the upcoming Israeli summit to an effort to present a united regional front against Iran and its nuclear ambitions. The TV network’s Ben Caspit, a columnist and political analyst, said Israel has much to offer on the military technology front and summit participants could also address a possible initiative to set up regional anti-missile warning systems.”

We have wondered how the peace described in Ezekiel 38 would come about and it would seem that we are now seeing it begin to develop! Today’s situation is perhaps a final call to prepare ourselves to meet our Lord, as he said, “watch ye therefore, and pray always, that ye may be accounted worthy to escape all these things… and to stand before the Son of man” (Luke 21:36). So then, as we pray for the return of our righteous king, the king of Israel, let us remember the exhortation of the apostle Paul:

“While they are saying, “Peace and safety!” then destruction will come upon them suddenly like birth pangs upon a woman with child; and they shall not escape. But you, brethren, are not in darkness, that the day should overtake you like a thief… so then let us not sleep as others do, but let us be alert and sober.” (1Thes. 5:3-4,6 NAS).