The Legacy of the Queen of Tarshish (Britain)

Listen in MP3 Format
September 9, 2022 – Audio, 10.05 MIN
(Links at bottom of page to download free viewers.)
There can be no doubt that the past week has been an eventful one, here in the Isles of Tarshish. It has brought not only a change of government, but a change in the monarchy as well.

Queen Elizebeth II, whose reign has lasted 70 years, died on Thursday afternoon. She was the longest serving monarch in the history of Britain, with her reign lasting from the industrial age, all the way to the internet age of today. 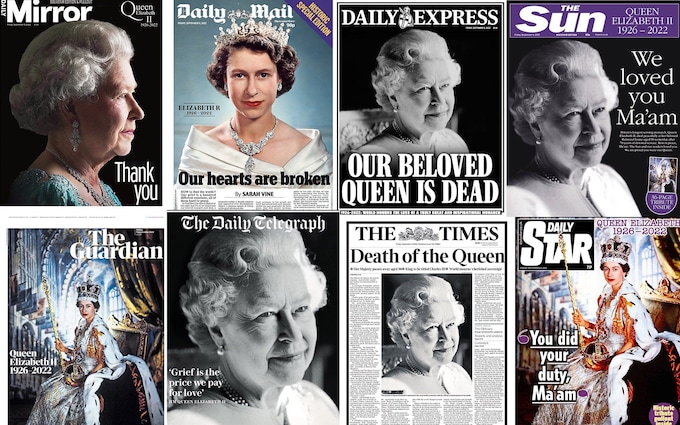 (The newspapers this morning)

In fact, continuity of her reign can be seen by the fact that she was the reigning monarch during both Boris Johnson’s and Winston Churchills tenures as prime minister. Her significant impact on Britain and British culture & History is undeniable.

Identifying Britain as the Tarshish power written about in the prophets makes occasions such as this momentous to bible believers. Before reflecting on the Queens legacy in this regard, we must first remind ourselves of the role and destiny of Tarshish in Bible prophecy. For more information on identifying Britain with Tarshish, please see previous editions of Bible in the News. The prophets describe two opposing alliances. On the one side we see Europe’s ten horn nations (as described in Daniel 7, and represented by the iron and clay feet of Daniel 2) aligned with Russia under the Roman Catholic influence of the mother harlot (Revelation 17; Ezekiel 38) at war with Israel and the Christ Lamb. On the other side we see the southern Arabian power allied with the “western” protestant trading nations, including Britain, Canada, Australia, and the United States (i.e. “Sheba, Dedan, the merchants of Tarshish, and all their young lions” – Ezekiel 38:13). These nations are broadly  the old colonies which developed into the Commonwealth as we now know it.

We read in Isaiah 60:9: “the ships of Tarshish will come first, to bring your sons from afar, their silver and their gold with them,”. Therefore Tarshish seems to be among the first to submit to the “Mighty One of Jacob” or the Messiah and bring their wealth for his use. So, we see Britain and Europe on different sides of both a political and a religious crisis. And we expect to see a trading Britian, with strong ties to her commonwealth offspring of nations.

One thing is certain – the queen has been an instrument of providence in the hands of God as he continues to bring about his purpose with Britain. Her monumental contribution to the commonwealth can be demonstrated by the following words, written in the Indian express:

“The deceased Queen cemented her dedication to the Commonwealth on her 21st birthday on April 21, 1947, when she issued a broadcast from South Africa addressing “the youth of the British family of nations” and promised to pledge her life to the service of the union.

After her coronation on June 2, 1953 (she had ascended the throne on February 6, 1952, the day her father, King George VI, passed away), the Queen embarked on a tour of the Commonwealth and was greeted with much ceremony and enthusiasm. Through her long reign, she visited well over a hundred countries and was likely among the most travelled heads of state in history.

Her many tours became symbols of Britain’s diplomacy, and while she rarely spoke publicly about her social views, many of her visits placed a clear accent on racial equality and ties between nations. In 1995, she visited South Africa to commemorate the end of apartheid, and to induct the nation into the Commonwealth.”

The dedication of the queen to the Commonwealth (Otherwise known as the young lions) can only be described as the hand of God working to prepare the groundwork for future trading alliances that we have seen begin to take off in the days since Brexit. In fact, the article also states that “One of the reasons the Commonwealth has stayed together has been the affection for the Queen”.

As the head of the Commonwealth, this unity must be attributed to the queen as part of her legacy.

Further to this, we must also reflect on the Queen’s religious legacy. There is no telling how much effect her strong devotion to Protestantism had on British Society. In fact, part of her coronation oath was to lay her hands on the Great Bible and answer the question: “Will you, to the utmost of your power maintain in the United Kingdom the Protestant Reformed Religion, established by law?” She replied, “ All this I promise to do”.

During the Brexit Vote in 2016, the Catholic Herald came out with the headline:

“forget the remain propaganda. This vote is about Britain’s spiritual identity”.

It has been alleged by most news outlets, and is very likely the case, that the Queen backed Brexit, despite her usual sphinx-like attitude towards politics. Surely this also, could be seen as the hand of God in having this particular individual on the throne to help maintain the separation between Britain and Catholic Europe. In a way, Brexit is just another chapter in the long history of animosity and broken relationships between Britain’s protestant throne, and Catholic Europe.

In fact, John Thomas wrote about this separation many times over 100 years ago, for example, in Anatolia in 1854: “Unless Britain can form some alliance beyond the limits of the Kingdom of Babylon, she will likely have to fight the battle of freedom and independence alone, and at the price of her own existence if she fails.” Words like that can’t help but remind you of Winston Churchill in the second world war – during a crucial hour in Britain’s relationship with Catholic Europe. Her independence and sovereignty were in jeopardy the also.

Talking about legacies, the government of the UK has also changed hands this week, after the resignation of Boris Johnson a few months ago. For good or bad, Boris will be remembered as the Prime minister who broke the Brexit deadlock and set the democratic wheels in motion to leave the EU. With the economic struggles from Covid and the war in Ukraine, with a new King, and a new Prime minister, this appears to be an era of transition for great Britain. We expect to see the rift with Europe continue to grow, the ties with the Commonwealth countries strengthen as we await the return of Christ. We also read about the humbling of the ships of Tarshish in Psa 48:7, and Isa 2:16, before this trading power can be put to use, in bringing the Jewish people home, and  contribute wealth to Israel, most likely for the building of the Temple. (Isa 60:9)

“The most High rules in the Kingdom of men”. As Almighty God brings down and sets up Kings (and queens) and prime ministers of this age we wait for the day when the King of Israel will arise with healing in his beams, to rule from Jerusalem in righteousness, and re-establish of the throne of David and the Kingdom of Israel.

This has been Daniel Blackburn joining you, for this weeks edition of Bible in the News.