Daily Readings and Thought for September 12th. “The Spirit of the LORD is upon me.” 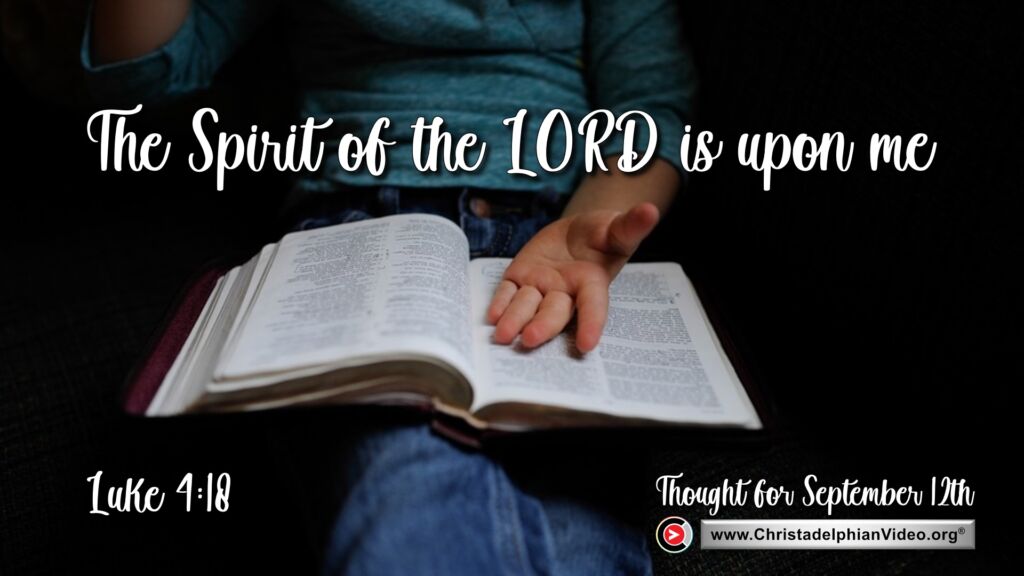 We have read today of Jesus going into the synagogue and reading from the prophet Isaiah to the congregation and then telling them they were witnessing the fulfilment of the words he was quoting.  The quotation was “The Spirit of the LORD is upon me, because he has anointed me to proclaim good news to the poor.”

Good news means the gospel, but why the reference to the “poor”?    Well, the Sadducees and other religious leaders were more interested in the rich who could give them and the Temple money.        Jesus had much better priorities and ”the poor heard him gladly”.   Then Isaiah had written and Jesus quoted, “to proclaim liberty to the captives”   How was that being fulfilled?    Maybe they thought it was to free them from Roman rule, but Jesus meant, in applying these words to his forthcoming work – that they were captives to sin!  His life would be a sacrificial offering to free them from that,

Then he quoted “recovery of sight to the blind” and while he did cure the blind, the even greater work was to cure spiritual blindness.  Have a read of 2 Peter 1 v.5-11

But Jesus, in quoting from Isaiah 61, stopped in the middle of verse 2.  Why?  The first half of that verse says, “to proclaim the year (time) of the LORD’s favour”   And that was the message he brought, and still brings to us. The ‘here and now’ was the time for both them and us to decide whether we accept the favour (grace) that is held out to us.

But soon, it will be the time for the second half of the verse, “and the day of vengeance of our God”   We can see why he stopped short and did not quote that and it should remind you of our thoughts yesterday.

As this world becomes more and more like the days of Noah, the time is getting closer for the door to be shut – and the day of vengeance of our God to begin.   On which side of the door will you be?

“IN THE BEGINNING WAS THE WORD” – Thoughts from today’s Bible readings – Oct. 10th

“OUR CITIZENSHIP IS IN HEAVEN” Thoughts from today’s Bible readings – Oct. 9th