Daily Readings and Thought for September 13th. “AND WHEN HE SAW THEIR FAITH” 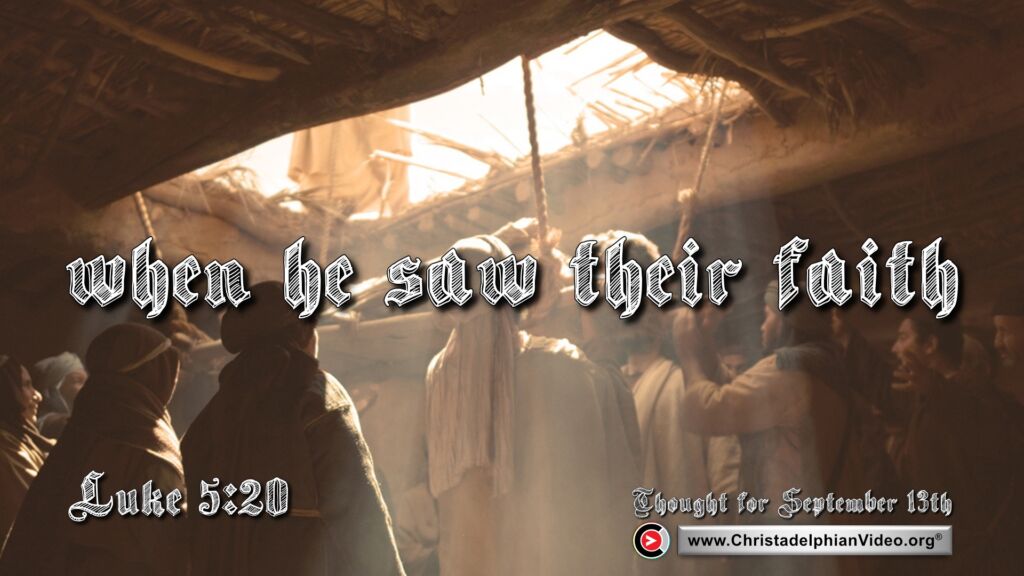 Jesus – just as much as His Father – then and now – is looking to see genuine faith – faith demonstrated by actions – not just by words. In 2 Kings ch. 19 today we see King Hezekiah appealing to Isaiah – for the king was in a desperate situation because of the vast army of the Assyrians outside the city.  We read (v.1) how the king “tore his clothes and covered himself with sackcloth and went into the house of the LORD.”

He sends his Secretary and “senior priests” to Isaiah with a message, “Thus says Hezekiah, This day is a day of distress, of rebuke, and of disgrace …. It may be that the LORD your God heard all the words of the Rabshakeh, whom his master the king of Assyria has sent to mockthe living God …” [v.3,4] Today the world is increasingly mocking the words of the living God – in passing ungodly laws and in getting the approval of the people through a plebiscite, as is currently proposed in Australia.

When we came to our reading of Luke ch. 5 we saw how “some men were bringing on a bed a man who was paralysed, and they were seeking to bring him in and lay him before Jesus, but finding no way to bring him in, because of the crowd, they went up on the roof and let him down with his bed through the tiles” before Jesus – and “when he saw their faith” [v.19, 20] the man was healed.

Now Hezekiah knew that his only hope was to have faith in God – it was an overwhelmingly large army that was surrounding Jerusalem.   And what a miraculous deliverance occurred!  And we are convinced – are we not (?!) that the only cure/deliverance for our utterly godless world will have a degree of parallel with God’s dramatic actions against the Assyrians!  Remember what we read in v. 35 of 1 Kings 19!

“When the Lord sees our faith” – he will have additional reason to act to fulfil his word.  May we, as Paul told the Colossians, “give thanks to the Father, who has qualified (us) to share in the inheritance of the saints in light” and

“delivered us from the domain of darkness and transferred us to the kingdom of his beloved Son.”  [1 v.12, 13]