Daily Readings & Thought for April 16th. “THE TRUTH WILL SET YOU FREE” 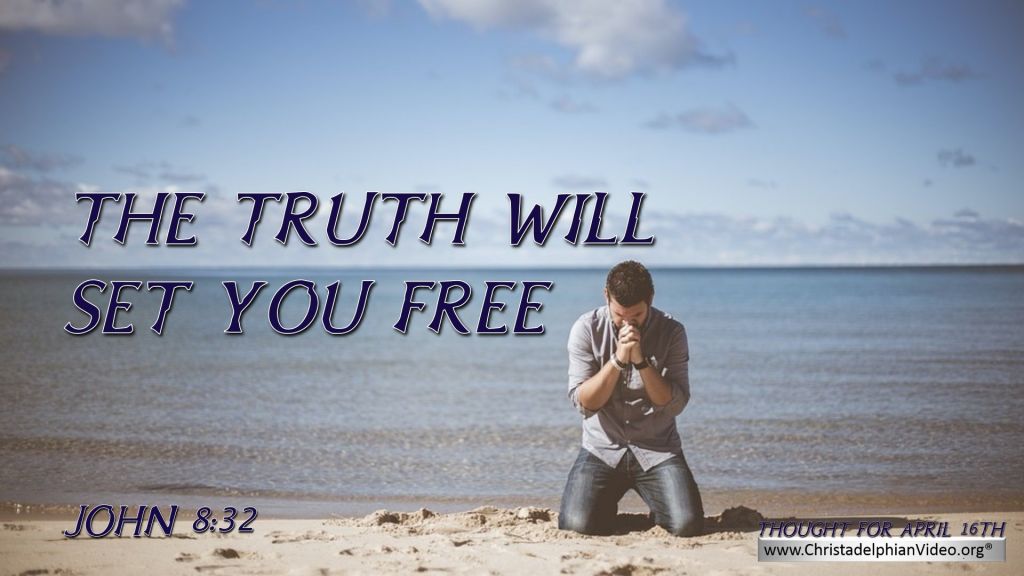 What did Jesus mean, “The Truth will set you free?” Free from what?  The 8th chapter of John today contains aspects of the teachings of Jesus that we have to think around and put into context to get the correct meaning.

The critics of Jesus were usually those whose thought processes were mechanical.  Concerning the woman caught in adultery, They thought they had him cornered, if he said the Mosaic law should be observed and she should be stoned they would probably have done so, or got others to, and then blamed Jesus before the Roman authorities because the Jews had no right to put anyone to death – that is why they brought Jesus before Pilate.. See John 18 v.31.

If Jesus has said something different, they would have denounced him before the people for not upholding the law!   His reaction confounded them – and after he said “Let him who is without sin be the first to throw a stone at her” [v.7] they slunk away from Jesus, no one was without sin among them.

Only Jesus was without sin – and he said to her, “Woman, where are they?  Has no one condemned you?  She said, ‘No one Lord’  And Jesus said, ‘Neither do I condemn you; go, and from now on sin no more.’” [v.10,11]  Notice how she addresses Jesus as “Lord”!  She saw him as far more than a “teacher” which is how the Jews addressed him.

Jesus speaks to all who come to him – in the same words as he spoke to the woman – whatever our failures have been, and the closer we come to “the light of the world” the more we are aware of those failures – but we also learn the truth of his words, “Whoever follows me will not walk in darkness, but have the light of life.” [v.12] and all the “darkness” in our character will be obliterated, indeed Christ will then be “formed in you.” [Gal. 4 v.19]

Jesus went on to tell them, “If you abide in my word, you are truly my disciples, and you will know the truth and the truth will set you free” [v.31,32[    The key action on our part is to “abide” in the word of Jesus.  John uses the Gk word for ‘abide’ more than 40 times in his gospel and the translators render it variously as ‘continue’, ‘dwell’  ‘remaining’ etc. Are you abiding in his word? Is the word ‘abiding’ in you?  If the answer is ‘Yes’ – you have been set free!