Daily Readings & Thought for April 17th. “THIS IS AN AMAZING THING” 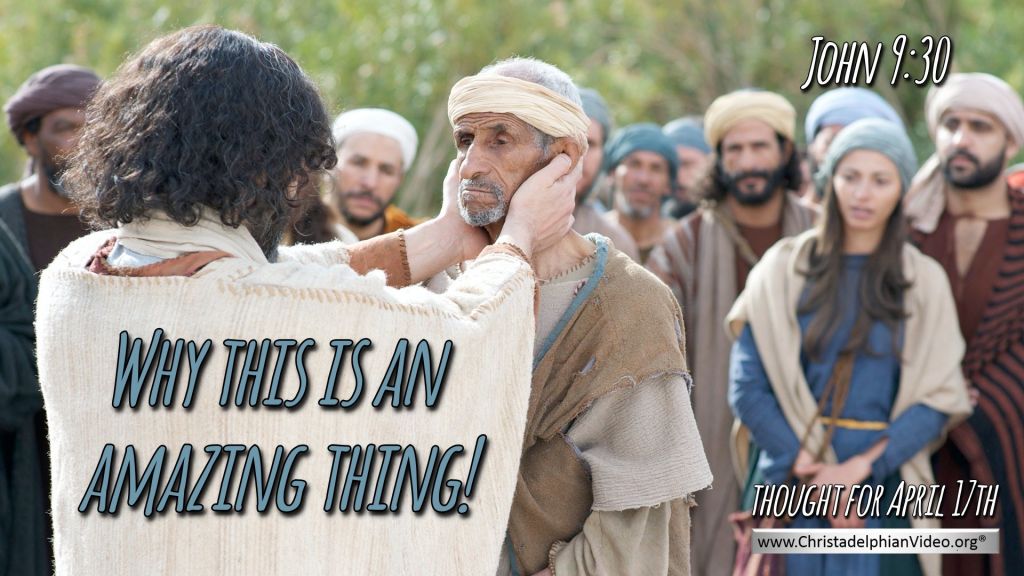 Today’s chapters in John’s Gospel very graphically illustrate the impact Jesus was having on the people and the jealousy this caused among their religious leaders.  He heals a man who had been born blind, who had never been able to see – utterly remarkable.  The religious leaders tell this man to “give glory to God, saying, “we know this man (Jesus) is a sinner” [9 v.24] They cannot deny that an amazing miracle has occurred, but say, “We know that God has spoken to Moses, but as for this man, we do not know where he comes from.”

The healed man answers them, Why this is an amazing thing!  You do not know where he comes from, yet he opened my eyes” [v.29,30]  Their anger boils over against the man as he persists in reasoning with them and telling them, “If this man were not from God, he could do nothing.”  They end up telling him, “You were born in utter sin, and would you teach us?’ And they cast him out.” [v.33,34]

This made us think of the increasing blindness of so many today who keep on saying at every opportunity, indeed making opportunities, to declare there is NO god, there never was a Creator, everything that exists is the result of countless happens of pure chance!  “This is an amazing thing” especially that people persist in this way of thinking!

Yet in one way we can understand why this is so – it is because the established church, especially the R.C. church are so hypocritical – in some ways they are parallel to the religious people who surrounded Jesus.

Those who are willing to read God’s word for themselves – and to keep reading so that they get its full flavour and meaning – are conscious of the amazing message that unfolds and that becomes clearer the more they read.  But sadly, as we read in John’s next chapter there are others that hinder the message – Jesus says, “He who is a  hired hand, who does not own the sheep, sees the wolf coming and leaves the sheep and flees and the wolf snatches them and scatters them.” [v.12]  Sadly this happened!

But scattered sheep can listen and, even today, hear “the good shepherd” through reading the words which he inspired his followers to remember and write down (see ch. 14 v.25-27) so that true sheep, even in the 21st Century, can “hear” his voice by reading his words and those of his disciples and other of God’s prophets. If they feed on them every day they find the only true pasture in the wilderness of this world – and will come into the promised land.