Daily Readings & Thought for April 18th. “THAT YOU MAY BELIEVE” 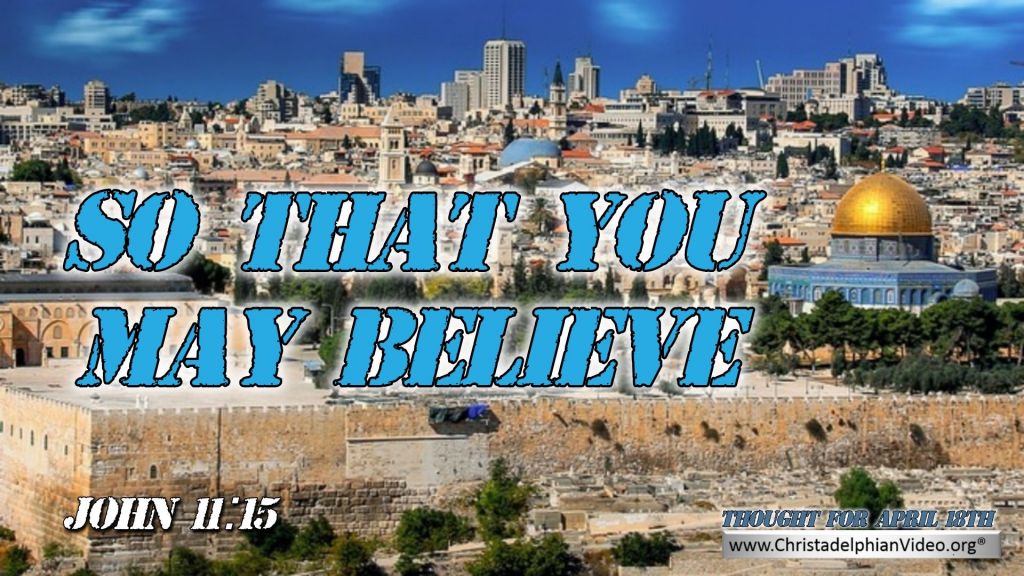 Today’s 11th chapter in John’s Gospel has that wonderful account of the raising of Lazarus. The ministry of Jesus, covering about 3 ½ years, is now approaching its’ climax.  The authorities are intensifying their efforts to arrest and kill him and Jesus and his disciples are staying out of Judea.

On getting news about Lazarus’ sickness Jesus waits 2 days longer before saying to the disciples, ““Let us go to Judea again’.  The disciples said to him, ‘Rabbi, the Jews were just now seeking to stone you and are you going there again?’’” [v.7,8]  Jesus makes a strange answer, “If anyone walks in the day, he does not stumble, because he sees the light of this world” [v.9]  This world!?  This world is in spiritual darkness and the one who walks “in the night” says Jesus, “stumbles because the light is not in him” [v.10]  Are you in danger of stumbling?  Is the “light” in you?  What does Jesus mean?  In ch, 12 we will read, “I have come into the world as light, so that whoever believes in me may not remain in darkness.” [v.46]  Remember also what we read in ch. 8 v.12

Jesus tells his disciples, “Lazarus is dead, and for your sake I am glad that I was not there, so that you may believe..  But let us go to him” [v.15]   We then have the well-known account of the remarkable raising of Lazarus after he had been dead for 4 days; and, as a result, “many of the Jews therefore, who had come with Mary and had seen what he did believed in him.”[v.45]   The Pharisees were told of this incredible miracle and the affect it had had; they became even more determined to put him to death – they saw his popularity as a threat that would “take away both our place and our nation.” [v.48]

Now consider, over the last 104 years a modern miracle has occurred, it is 104years since Jerusalem and the land of Israel was delivered from the control of the Turks, the Muslims – and 73 years ago the U.N. voted in favour of at least part of the promised land becoming a Jewish nation, but the U.N. had no powers to enforce their decision: however, against overwhelming odds the Jews triumphed! It was the resurrection miracle of a nation, destroyed 1,951 years preciously,  which God’s word had foretold. (Luke 21 v.24  Romans 11 v.25)

This modern resurrection miracle has occurred as prophesied “that you may believe”  that is, those who read and really know God’s word. May you be among them?  Do you really see “the light of the world” with the eyes of true faith – for as this world plunges into deeper darkness – only those with genuine faith will endure.