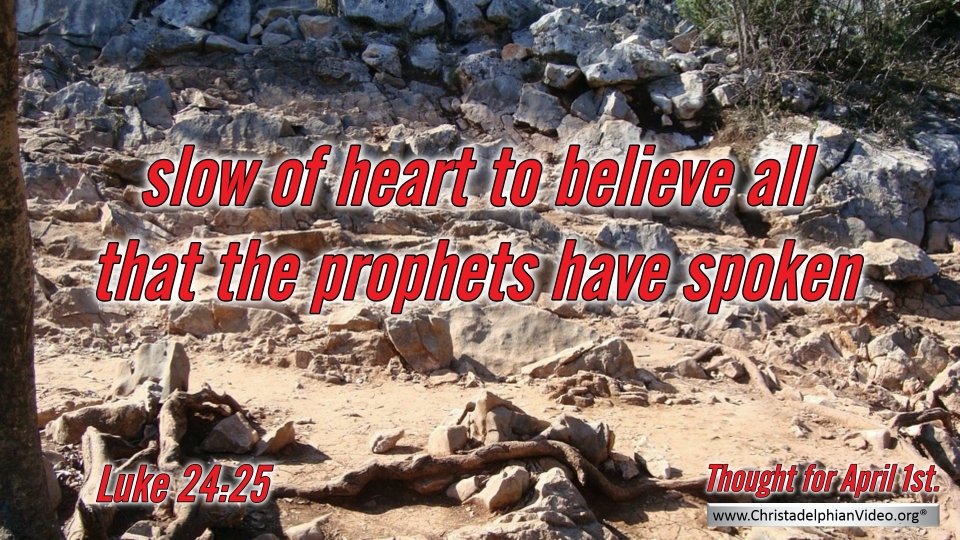 The last chapter in Luke’s gospel is soul stirring if we let our minds visualize the events it describes.  Let us, in our imagination, see ourselves among the disciples or among the women who came to the tomb. Meditate and let the events ‘come alive’ in our thinking..  The women dedicatedly followed Jesus to the end to do whatever they could even though their ‘world’ had fallen apart. And when the world today is falling apart? What of us?

We read of the two who were joined by a stranger as they walked the 10km to Emmaus. They were told by him they were “slow of heart to believe all that the prophets have spoken” [v.25] about the sufferings of the Messiah and how after that “he would enter into his glory.”  They completed their journey, it is now evening and they “urged him strongly, saying ‘Stay with us.’[v.29]

The next verses are fascinating!  And “when he was at table with them he took the bread and blessed and broke it and gave it to them,. And their eyes were opened, and they recognized him.  And he vanished from their sight.”   What opened their eyes? He broke the bread with his hands and gave it to them with his hands!  What hands!! And has soon as recognition ‘flashed’ into their minds, he vanished!

Despite the lateness of the day they surely made the return journey of 10km in record time saying “to each other, ‘Did not our hearts burn within us while he talked to us on the road, while he opened to us the Scriptures?’”[v.32]

And what of our feelings as we read the scriptures?  What motivates us to read them? Do we have a sense of urgency to understand and believe?

There are a good number of Old Testament passages that are remarkable prophecies of the Messiah’s coming – we can now see which applied to his first coming – and which to his second.  Do our hearts burn within us as we read them or are we “slow of heart to believe?”   Could our belief be largely academic – in our head but not in our heart?

Looking back at ch.21 in Luke, there are words of Jesus that have surely been recorded for you and me, “Stay awake at all times. Praying that you may have strength to escape all these things that are going to take place, and to stand before the Son of Man.”