Daily Readings & Thought for April 26th. “THOSE WHO RECEIVED HIS WORD …” 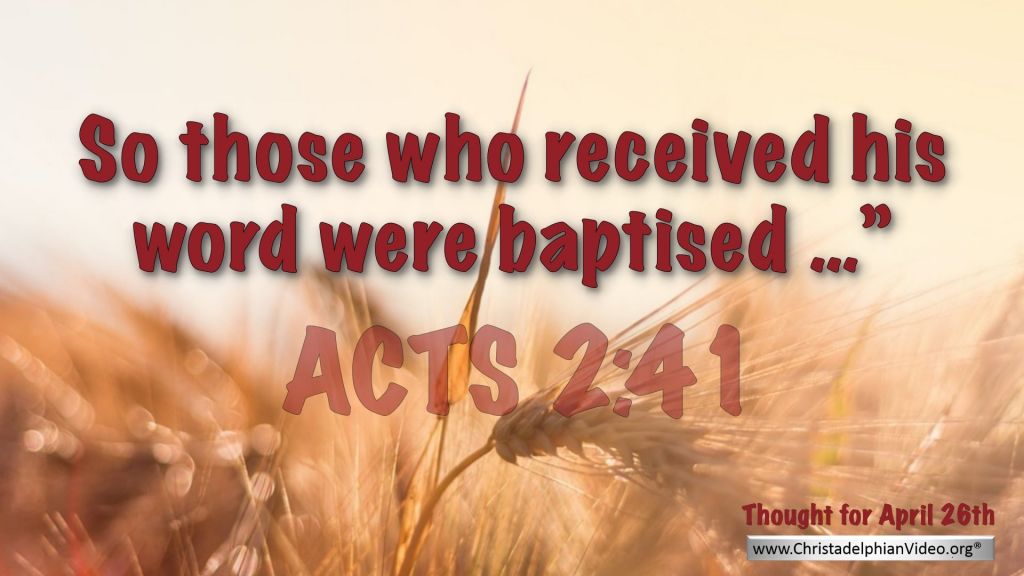 Our chapter in Acts (2) contains the dramatic message of the Apostle Peter on the day of Pentecost.  This day is the same as the Old Testament “Feast of Weeks” (Exod.34 v.22; Lev.23 v.15,16]  ‘Pentecost’ is the Greek word for ‘fiftieth’ – it occurred 50 days (7 weeks) after the Passover, it was at the start of harvesting.

The climax of Peter’s message is to declare to those assembled, from a vast range of countries, the great significance of what had happened at the Passover.  These people, obviously Jews, had come from a vast range of places to worship – it is evident they had not been there for the week or weekend as happens these days.

At Passover time the jealous Priests had whipped these visitors (and others) into a frenzy to reject Jesus as a false Messiah.  Remember that in the “forty days” (Acts 1 v.3) after Jesus’ resurrection Jesus was only appearing to his followers. The last 2 chapters of John we have just read illustrated this was not on a daily basis.  Paul was aware there was one occasion when “he appeared to 500 brothers at one time” [1 Cor 15 v.6]  We can reasonably imagine that all sorts of what would be called today, ‘unconfirmed reports’ were in circulation.

What an impact the ability to speak in other languages would have had! The “mighty works of God” [v.11] were being declared to each in their own language.  Peter brings his speech to a climax, declaring, “Let all the house of Israel therefore know for certain that God has made him both Lord and Christ, this Jesus whom you crucified” [v.36]

A great many of the hearers were “cut to the heart” [v.37] They “said to Peter and the rest of the apostles, Brothers, what shall we do?” and are told, “Repent and be baptised … save yourselves from this crooked generation.  So those who received his word were baptised …” [v.40,41] about 3,000 of them.

What is it to “receive” the message?  It is a very common word in the Greek, the repentant thief on the cross with Jesus acknowledged, “we are receiving the due reward of our sins” [Luke 23 v.41] The Gk word is often translated as “accept”   Paul was told when he returned to Jerusalem, “”make haste and get out of Jerusalem quickly , because they will not accept your testimony about me.” [Acts 22 v.18]  Today, the main attitude is either scoffing or indifference.  Few are like those of Berea who “received the word with all eagerness, examining the Scriptures daily to see if these things were so.” [Acts 17 v.11] How have you “received” God’s word, what effect is it having in your life?