Daily Readings & Thought for August 20th. “THOSE WHO PASSED BY” 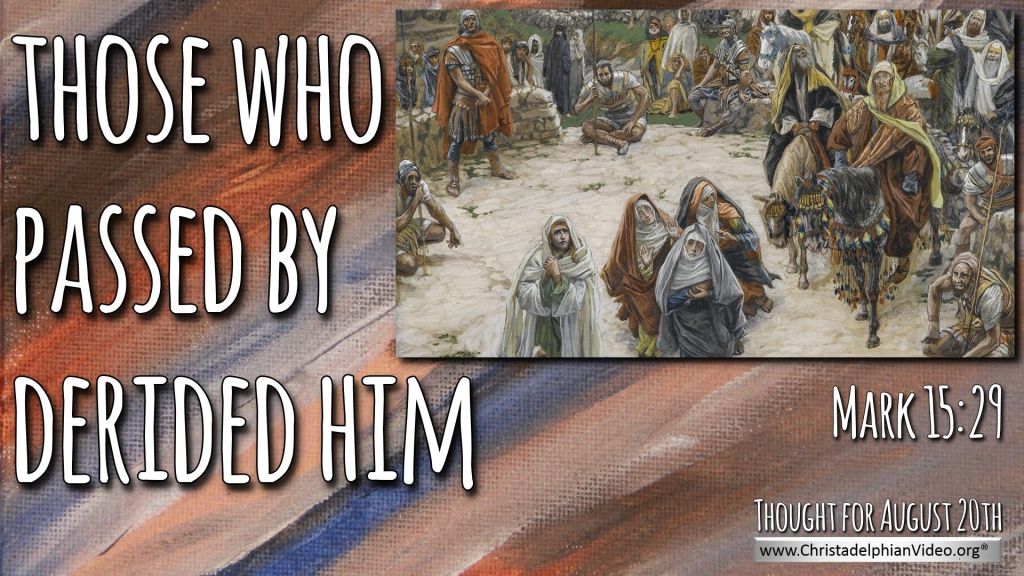 Mark’s account of the crucifixion includes the comment that “those who passed by (the cross) derided him, wagging their heads and saying, ‘Aha! You who would destroy the temple and rebuild it in three days, save yourself, and come down from the cross” [15 v.19,20]  Matthew’s account includes the added comment,” and we will believe …”

Imagine the scene! Imagine the blindness of their minds at all he had done, wonders that climaxed with the raising of Lazarus after 4 days in the tomb.  At least one saying of Jesus had stuck in the their mind, his response to them when they asked, “What sign do you show us …” and his strange but thought challenging answer, “Destroy this temple, and in three days I will raise it up” [John 2 v.18,19]  Only later did the disciples understand.

There are those today who go to the Bible to misquote it, ignoring all the verses that say the opposite to what they want to believe.  They talk of the soul being immortal, but we read, “the soul who sins shall die” [Ezek 18 v.4]   They also talk of Jesus being co-equal with God and, in one sense, that is true: in John 17 v.20-23 we read how Jesus prays that believers, his genuine followers, “may all be one, just as you Father are in me, and I in you, that they also may be one in us, so that the world may believe that you sent me … that they may become perfectly one …”

And so did the disciples became – never again did they argue as to who was to be the greatest.  May all genuine disciples of today make real progress in becoming “one” in this sense, and then, as Jesus prays, such believers “may be with me where I am, to see my glory …” [v.24] – and surely this is when he returns to earth.

May none of us be like “those who passed by” – they “mocked him” saying if he came “down from the cross” they would “believe.” [v.32] He is now at the “door” and will very soon open the door – and then the mockers will “see and believe” – but it will be too late, he will shut the door on them – see Luke 13 v.25.  May we have the perception of “the Centurion, who stood facing him (and) saw that in this way he breathed his last (and) said, ‘Truly this man was the Son of God.’” [v.39]   We are not told what difference it made to this Centurion, but Roman historians tell us that there were hundreds of Christians in Rome in A D 64 (34 years later) and that Nero made them take the blame for the fire that destroyed much Rome; the Gospels show there were several Centurions who were not among “those who passed by.”   May we, as much as possible, be like those early believers, “who believed (and) were of one heart and soul” [Acts 4 v.32]