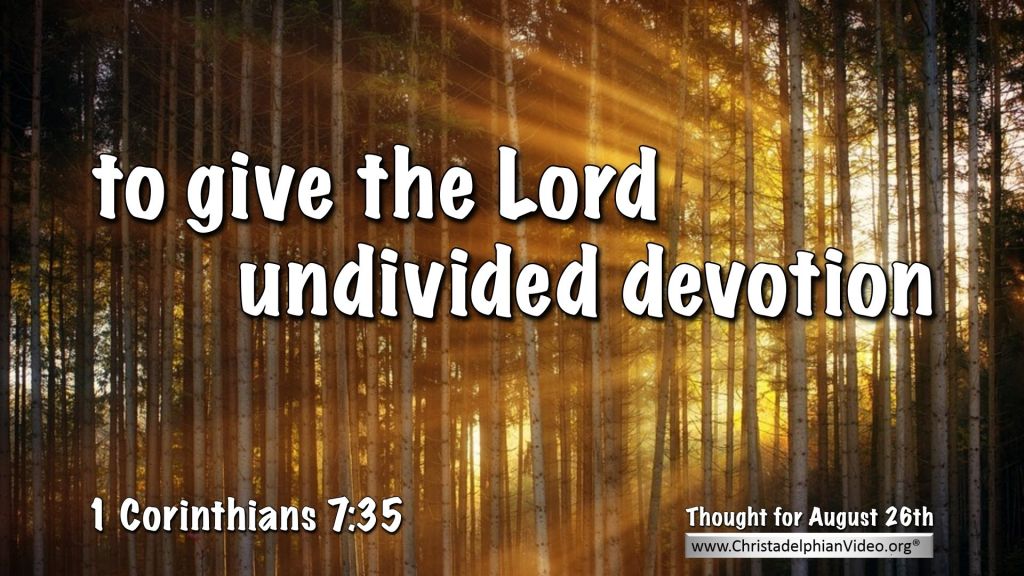 The Apostle Paul demonstrates what it is to give the Lord “undivided devotion” [1 Cor.7 v.35].  We have to acknowledge however that his case was exceptional, although there were others who remained single, e.g. Barnabas, as we will read tomorrow in ch. 9 v.5,6. We note that Peter, the leading Apostle, had a wife (Matt 8 v.14).  Jeremiah, whose long journey as a prophet  in serving the LORD we have nearly finished reading, is never mentioned as having a wife.

Paul is sometimes misquoted as though he counsels believers not to marry; however, it is clear that Corinth is experiencing considerable chaos and Paul writes, after first admitting, “I have no command from the Lord,” that, “I think in view of the present distress it is good for a person to remain as he is….  Do not seek a wife.  But if you do marry, you have not sinned …” [v.25-28]    The vital thing is to become “firmly established in … heart” [v.37] and the daily feeding of our mind on godly thoughts and advice is a vital ingredient in achieving that.

An example of the opposite, of an unstable character with an unbelieving wife, is seen in the behaviour of Ahab in today’s chapter in 1 Kings 21.  Yet even he, after his evil wife Jezebel had orchestrated the death of Naboth, apparently without him being aware, an act that enabled him to gain Naboth’s vineyard; when he is confronted by and denounced by Elijah, “humbled himself before” God [v.29].

As a result God says, “I will not bring the disaster in his days: but in his son’s days I will bring the disaster …”  However, as we will read tomorrow, it is soon God’s will that he shall die because he listens to false prophets rather than a prophet of the LORD and, despite disguising himself, is killed in battle.

As life’s battles increase in these days, and, the world’s fears increase, let us try even harder to give to our Lord “undivided devotion” – and, if we have a wife or a husband and can do this together, then let us see, if we haven’t already seen, how much we can still accomplish in the service of our Lord and Saviour.