Daily Readings & Thought for August 28th. “COME TOGETHER, WEEPING AS THEY …” 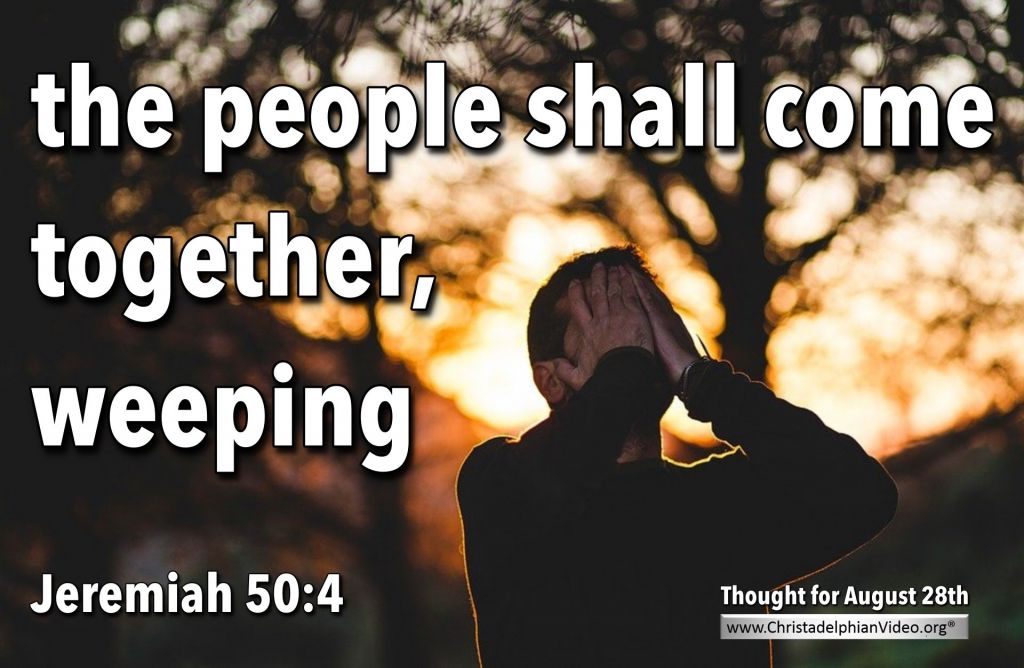 Today’s readings convey a wide mixture of information and resultant thoughts. God removes Elijah, and Elisha takes up his role, his authority being confirmed by several miracles.  Although Elijah is taken “up into heaven” – it is obviously not into heaven itself!  It is not clear where he is taken – but a letter is later received from him – see 2 Chron. 21 v.12. Paul tells the Corinthians about the things that “were written down for our instruction” [1 Cor 10 v.11] and those concerned about Paul’s warnings would eagerly seek such writings, they would not be easily available as they are today.

In Jeremiah we read a lot about Babylon’s destiny, her doom!  Almost all the people are now in captivity in parts of Babylon, Daniel and Ezekiel are there, it is the power that dominated the ‘Middle East’ of that era.  But God’s message through Jeremiah is, “The word that the LORD spoke concerning Babylon … declare among the nations … Babylon is taken …” [50 v.1,2]

We know that the Babylon of those days dramatically ceased, we will read of that in Daniel, but it is obvious Jeremiah is granted a vision far beyond that era, “… in that time, declares the LORD, the people of Israel and the people of Judah shall come together, weeping as they come, and they shall seek the LORD their God.  They shall ask the way to Zion, with faces turned toward it, saying, ‘Come, let us join ourselves to the LORD in an everlasting covenant …” [v.5,6]

After the death of Solomon the nation split in two.  When their Messiah came they did not recognise him, they had not carefully read the message of the prophets, especially Isaiah. Jeremiah is now told of a future time, “In those days and at that time, declares the LORD … I will pardon those whom I leave as a remnant.” [v.20] As a result of this pardoning they “come together, weeping as they come … to seek the LORD their God.”

We watch to see this happen – surely it is parallel with the incredible dramas to happen at the return of Christ, their true Messiah.  The chapter ends with a statement that finds clear parallels in the book of Revelation, at “the capture of Babylon the earth shall tremble, and her cry shall be heard among the nations.”

In Rev. 18 v.9, 19 we read, “Alas! Alas!  … you mighty city, Babylon!  For in a single hour your judgement has come … she has been laid waste”. Babylon in Hebrew is actually the word ‘babel’ – and in Genesis we are briefly told of the dramatic end of that city after the earths’ cleansing in the time of Noah. Our world was initially cleansed by message of Christ, this was renewed to some extent when God’s word was freely available in all languages – but now we face the time when “the earth shall tremble.”  Will you tremble? Only those who are really on ‘the Lord’s side’ will not, for the angels will gather them.