Daily Readings & Thought for August 31st. “FOR THEIR UPBUILDING ….” 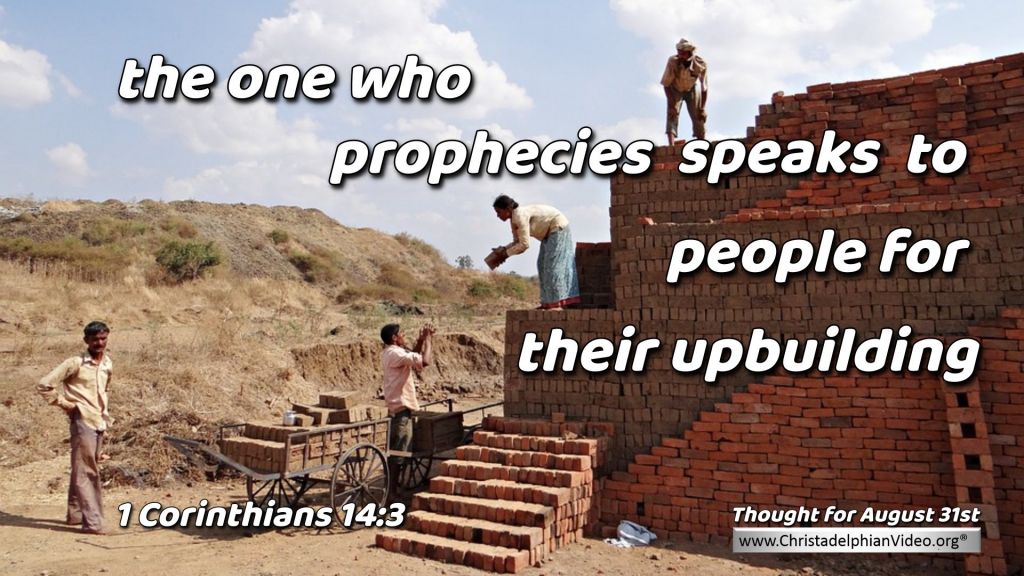 Today we read the completion of Paul’s earnest advice to the Corinthians to cease their misuse of the gift of speaking in tongues, that is, other languages, as had taken place in Jerusalem on the day of Pentecost (Acts 2).  He sets the gift of tongues in contrast to the gift of prophecy – this gift was not focussed on predicting future events, but, as Paul expresses it, “the one who prophecies speaks to people for their upbuilding and encouragement and consolation.”[14 v.3] stressing that, “the one who prophesies builds up the church.” [v.4] – also in warning believers when necessary, as we have seen was the particular task of the prophet Jeremiah.

Note that Paul says, “I thank God I speak in tongues more than all of you. Nevertheless, in church I would rather speak five words with my mind in order to instruct others, than ten thousand words in a tongue.” [v.18,19].  Because of Paul’s widespread travels, he had need to be able to speak in many different languages.

His ‘punch’ line in the next verse arrests our attention, “Brothers, do not be children in your thinking. Be infants in evil, but in your thinking be mature.” [v.20]  Today we become mature by prayerfully reading the word of God every day, and by carefully thinking about what we read.. Paul goes on to tell them, “…When you come together … let all things be done for building up” [v.26].

If someone had the gift of tongues they were to keep silent unless there was someone who could give a translation. [v.28]  The best procedure in their gatherings was to “let two or three prophets speak, and let the others weigh what was said.” [v.29]  How excellent is such a procedure, let us weigh up what is said in Bible Classes and at other times, we work together as a team – our only ‘leader’ is Christ.

The last 2 verses tell us, “ … my brothers, earnestly desire to prophesy, and do not forbid speaking in tongues.  But all things should be done decently and in order.” We have seen that phrase about not forbidding to speak in tongues repeatedly quoted by those who advocate Pentecostalism today!   But Paul had written [Ch. 13 v. 8] “as for tongues, they will cease” and the last verse of that chapter, as we observed yesterday, names the 3 things that were to abide!  Let us make sure we possess those 3 things as we work at “upbuilding” one another.