Daily Readings & Thought for August 6th. “THE TIME IS FULFILLED” 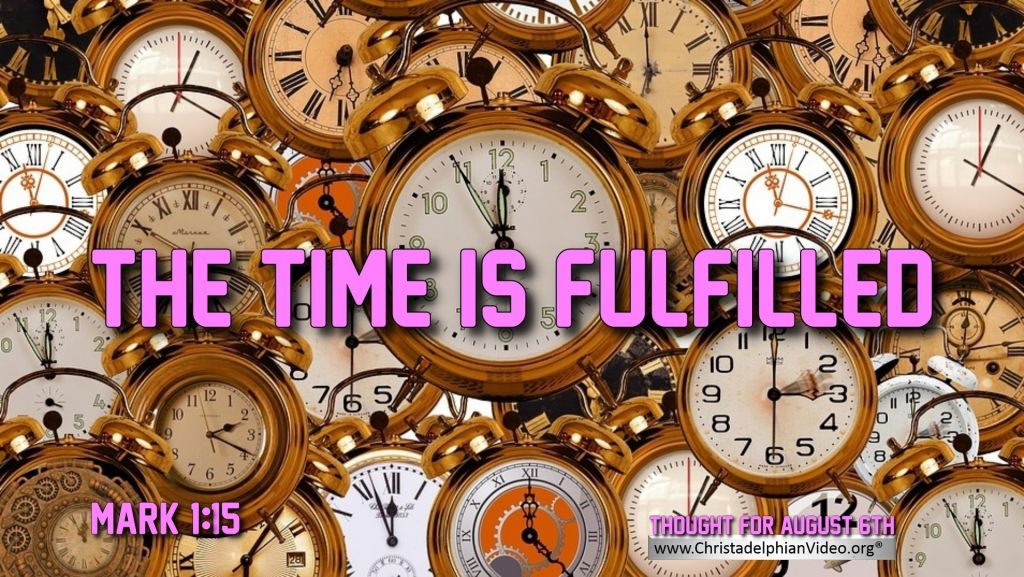 Today we began reading the Gospel of Mark.  It begins with an account of the preaching of John the Baptist in fulfilment of the prophecies of Isaiah and Malachi, “Behold, I send my messenger before your face, who will prepare your way…” [v.2]  Although John did no miracles, “all the country of Judea and Jerusalem were going out to him and being baptised by him in the river Jordan, confessing their sins.” [v.5]  He was achieving a remarkable impact for we read in Acts how Paul encountered those baptised by John as far away as Ephesus (see Acts 18 v.25; 19 v.3)

Mark tells us, Jesus began to preach “proclaiming the gospel of God, and saying, ‘The time is fulfilled, and the kingdom of God is at hand, repent and believe in the gospel.” [v.14,15]  The king of the Kingdom was “at hand” and the gospel he taught was about the heavenly kingdom to come on earth [Matt. 5 v.5]  Beginning with John it was a renewal of God’s message after about 400 years of silence since the prophet Malachi.  When Jesus said, “the time is fulfilled” it was the time period of 70 weeks (70 x 7) prophesied through Daniel (9 v.24). Many knew this time was just about completed and “the people were in expectation, and all were questioning in their hearts concerning John, whether he might be the (Messiah) Christ”  [Luke 3 v.15]

There have been many attempts in earlier generations to understand the other time periods Daniel details; there was considerable anticipation more than 150 years ago that his return was imminent, but Jesus told his disciples just before he ascended to heaven, “It is not for you to know times or seasons that the Father has fixed by his own authority.” [Acts 1 v.7]

The main clue we have been given is in Luke 21 v.24 that Jerusalem would cease to “be trampled underfoot” by non-Jews and at that time it should be understood “the times of the Gentiles are fulfilled.”  At that time, said Jesus, there will be “distress of nations in perplexity … people fainting with fear and foreboding at what is coming on the world” [v.25,26]  There  are the strongest reasons to believe that today “the time is fulfilled”  so let us do what Jesus told true believers to do, “… when these things begin to take place, straighten up and raise your heads, because your redemption is drawing near.”