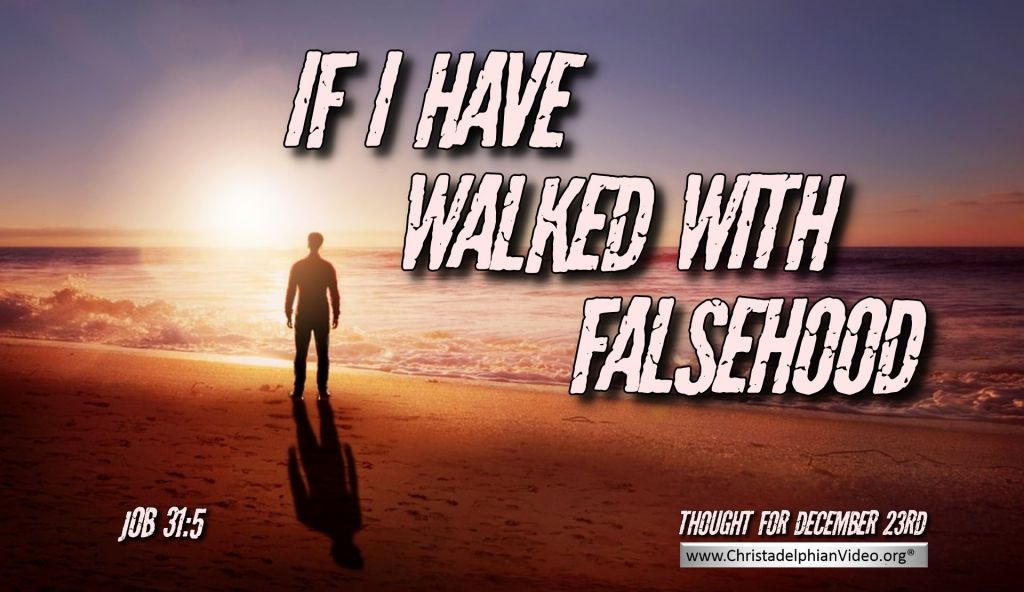 ‘IF’  is a two letter word that sometimes occurs within a very significant context.  In our reading in Job today, Job’s 3 friends give up on their vain attempts to reason that Job must be a secret sinner.  The argument that he must be so because of all the bad things that happened to him collapses, they can quote no evidence and in any case, the real facts of how the wicked so often prosper destroys their reasoning.

We noticed how, in Ch.31, in his final words to them, Job uses the word ‘IF’ no less than 18 times, saying, “If I have done this or that then I would be deserving of God’s judgements, i.e. punishment.  Food for much thought here!

“If I have walked with falsehood” [v.5] ‘been enticed toward a woman’ [v.9] ‘made gold my trust’ [v.24] ‘rejoiced because of my wealth’ [v.25] worshipped the sun and moon [v.26-28] ‘concealed my transgressions’ [v.33] not made fair and proper use of the produce of my lands [v.38/39]   In these efforts to justify himself, with which we can empathize, Job also makes some other statements that add up to a challenge to us as to our responsibilities (in the sight of God)  toward others. He says, “If I withheld anything that the poor desired, or caused the eye of the widow to fail, or have eaten my morsel alone and the fatherless have not eaten of it.’ [v.16/17] “If I have seen anyone perish for lack of clothing” [v.19] and not looked after the traveller…” [v.31/32]

In this country the Government provides for much of this, but there are ‘cracks’ in the system that need watching, but in many other countries there are many more cracks..   Another point is in v.29 “If I have rejoiced at the ruin of him who hated me, or exulted when evil overtook him”

He recognized God would judge him for his failures to act and for having wrong attitudes; it was not just a matter of avoiding doing bad things.

For his godly attitude in all these things and, especially, for speaking of God that which is right [42 v.7] Job is, in the end, blessed.  We have not been tested like Job, but the question we each must ask ourselves is – can we echo the words of Job ourselves?  Let us each reflect on the way we have lived and are living our lives.