Daily Readings & Thought for February 1st. “THE KINDNESS AND THE SEVERITY OF GOD” 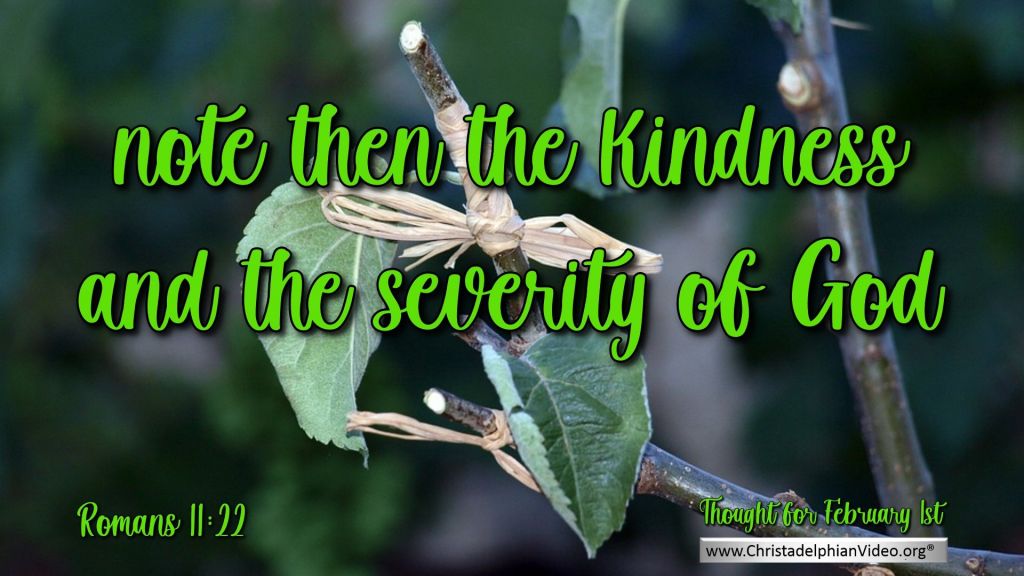 It is fundamental to human nature, uninfluenced by God’s Word, to become proud about what they are achieving. Paul makes this point strongly in chapter 11 of his letter to the Romans. He warns the Gentile converts not to follow the same path as did most leading Jews in their pride in their privileged position before God. He uses the analogy of an olive tree. We understand that the trunk of the tree was Abraham, Isaac and Jacob with the Jewish nation as the branches.

Paul then makes the point to the Gentiles, that the natural “branches were broken off” so that you “might be grafted in” [Romans 11:19] adding, “they were broken off because of their unbelief, but you stand fast through faith. So do not become proud, but stand in awe”

Tragically the Gentile branches have become proud and so many have been broken off or are in the process of dying. Observe the principle stated in Romans 11:22 “note then the kindness and the severity of God.” It is tragic that so often all the emphasis is on the kindness and love of God as though he is purely a God of love, ever forgiving despite continuing sinfulness.

Paul comments on the future of the natural branches, saying, if “they do not continue in unbelief” they “will be grafted in again, for God has the power to graft them in again,” adding, “how much more will these, the natural branches, be grafted back into their own olive tree” [Romans 11:23-24]. Paul warns the Gentiles not to “be wise in your own conceits” The twin brother of pride is conceit! The thing “I want you to understand”, he says, is that “a partial hardening has come upon Israel until the fullness of the Gentiles has come in.” [Romans 11:25]

We feel we are close to this “fullness” of time when the Gospel has reached every corner of the world “and then the end shall come” as we read in Matthew 24:14 last week. Let us “stand in awe” as we witness the fullness of time and pray we may remain grafted in – or be grafted in – if we are not yet part of God’s olive tree.