Daily Readings & Thought for February 6th. “HAVE YOU NEVER READ” 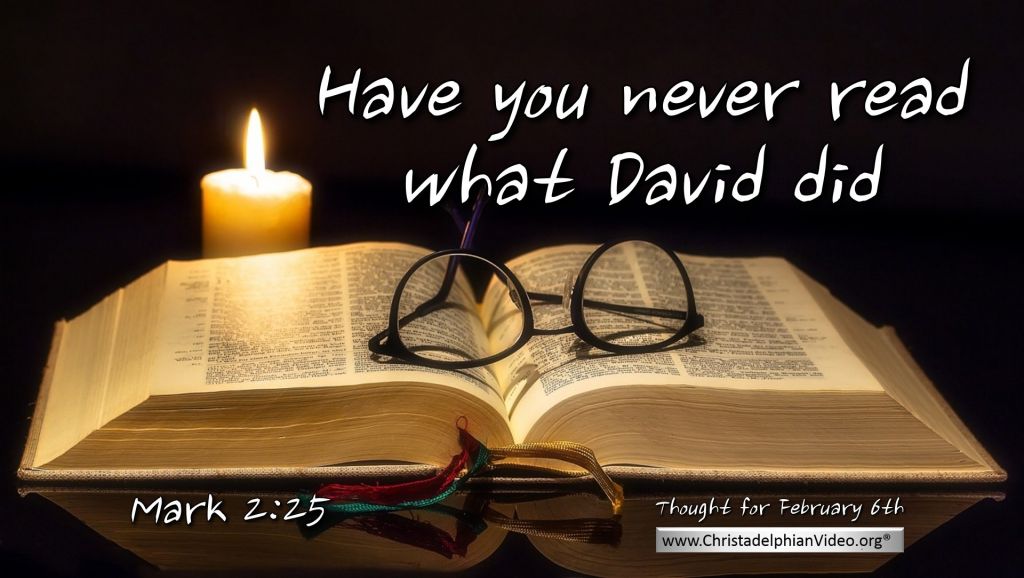 The words of Jesus in many places challenge us to meditate and think through what he says so as to get to the heart of the point he is making.  In Mark ch. 2 today we see how he responds to the Pharisees’ criticism of his disciples because they, on a Sabbath day, in walking through the grain fields, plucked and ate ears of corn.  The Pharisees had minutely defined all the precepts of the Law so that their sense of their own righteousness rested on keeping the definitions of the Law they had developed.

In response to their criticism Jesus said, “”Have you never read what David did, when he was in need and was hungry, he and those who were with him: how he entered the house of God … and ate the bread of the Presence” [v.25,26]  Of course they had read what David did!  But they never took in the significance of his action: they had ‘tunnel vision’ on the application of the Law, their ‘righteousness’ was based on meticulously keeping the letter of the Law, even ‘embroidering’ the Law as they interpreted it to their satisfaction.

Jesus on one occasion remarked on how “two men went up into the temple to pray, one a Pharisee and the other a tax collector.  The Pharisee, standing by himself, prayed thus: ‘God, I thank you that I am not like other men, extortioners, unjust, adulterers, or even like this tax collector. I fast twice a week; I give tithes of all that I get…'”  [Luke 19 v.10-12]  He concentrated on speaking to God and of boasting of his righteousness: we can say, he had ‘I’ trouble!

In contrast, said Jesus, “the tax collector, standing far off, would not even lift up his eyes to heaven, but beat his breast, saying, ‘God, be merciful to me, a sinner!'” [v.13]

This is a lesson for us! We can become proud of all the detail of what we read and learn!  This pride can lead us to have a sort of ‘tunnel vision’ as to the way to understand the meaning of what we have read!  Jesus said, of the second man, ” I tell you, this man went down to his house justified, rather than the other. For everyone who exalts himself will be humbled, but the one who humbles himself will be exalted.”[v.14] There is a simple, but powerful lesson, in those words!

Let us have a heart-felt sense of awe as we read the Bible’s divinely inspired words every day. Paul warned Timothy in his final letter about those who are “always learning and never able to arrive at a knowledge of the truth.” [2 Tim. 3 v.7] Their learning was undertaken with the wrong motive, just like the Pharisees. May we have the right motive whenever we “read” God’s word.