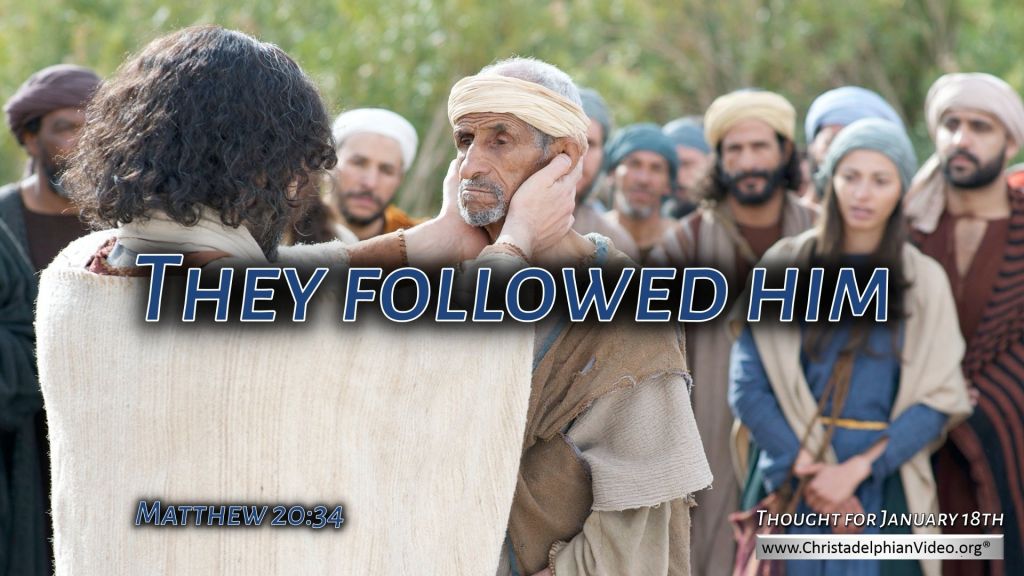 Why did people follow Jesus? We know his disciples did, because he called them to do so, but others?  We had an example in today’s chapter 20 in Matthew, “there were two blind men sitting by the roadside” [v.30] who cried out when they were told Jesus was passing by, “Lord, have mercy on us, ‘Son of David’”  To call him ‘Son of David’ meant they acknowledged him as the Messiah.

“Jesus called them and said, ‘What do you want me to do for you?’  With what sense of potential wonder would they have replied, “Let our eyes be opened.”[v.33]

Jesus reacted – “in pity touched their eyes, and immediately they recovered their sight.”  And what did they do then?  They “followed him” [v.34]  This was in contrast to others; nine of the 10 lepers he healed did not even return to express their gratitude! (Luke 17 v.15-18) and when the people came to see the madman who Jesus healed “clothed and in his right mind, and they were afraid … and they began to beg Jesus to depart from their region.” [Mark 5 v.15,16]  The loss of the pigs dominated their thinking. What dominates our thinking?

Our world is full of spiritually blind people and others with the leprosy of sinful godless ways; just a few are like the Ephesians, who, Paul said, have had “the eyes of your hearts enlightened that you may know what is the hope to which he has called you, what are the riches of his glorious inheritance” [1 v.18]  But few have such “eyes” – Peter’s experience was just like our world; in his last letter he wrote of those who “have eyes full of adultery, insatiable for sin.  They entice unsteady souls. They have hearts trained in greed” [2 Pet. 2 v.14]

Two days ago in Matt. 19 we read the answer of Jesus to the “man who came up to him, saying ‘Teacher, what good deed must I do to have eternal life?”  [v.17]  But it is not achieved by a ‘one off’ good deed is it!  This man was wealthy, and he needed to get rid of that in which he trusted, so Jesus told him, “… go, sell what you possess and give to the poor, and you will have treasure in heaven; and come, follow me” [21]

That was not the answer he was looking for “he went away sorrowful”.  What answer are we looking for?  Hopefully we have found that answer and are among those who “followed him” making our lives count in some meaningful ways, according to our abilities, in the way we follow him.    A last thought – returning to our quote from Peter – we noted his words, “whatever overcomes a person, to that he is enslaved.” [v.19]  Let us be enslaved to Christ, it is not possible to be only half committed. (Note the verses which follow in Peter)