Daily Readings & Thought for July 25th. “I WILL NOT DRINK AGAIN … UNTIL THAT DAY …” 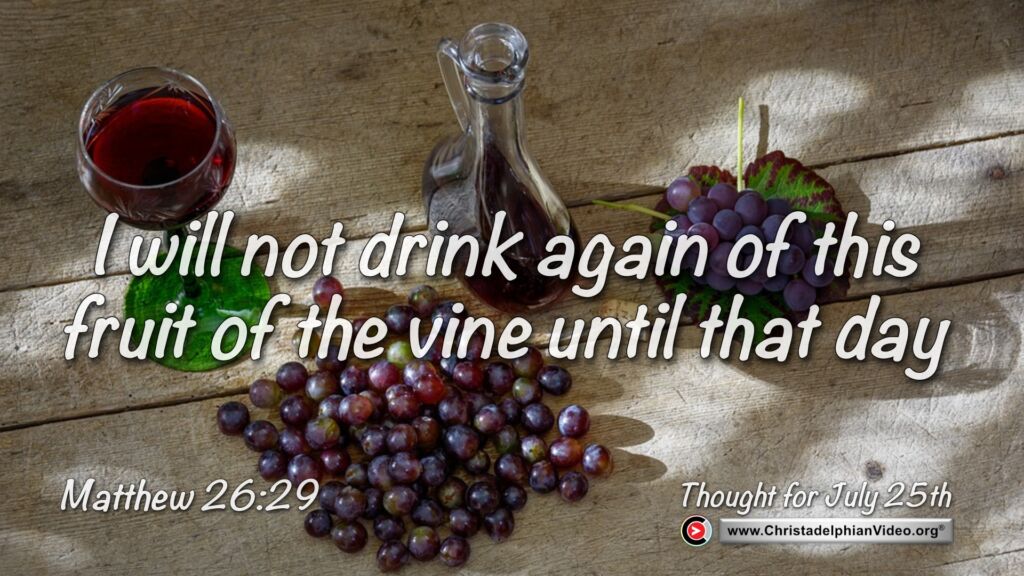 Today we read Matthew ch. 26 – in a spirit of reverential awe – the account of the arrest of Jesus and the abject failure of the disciples to give him moral support as he prayed in the garden. He said to Peter, “”So, could you not watch with me one hour?” [v.40]  Do we realise, what they did not realize, that he needed their moral support!?  Is a time of trouble almost upon us in which we will need to “watch” to support and strengthen one another as we anticipate the coming of the angels “gather his elect … from the ends of the earth” [Matt. 24 v.31]

Let us now meditate on the first part of today’s chapter and the special fellowship which Jesus had with his disciples when he “took the bread” and then “he took the cup.”  But then he added words which fill us with, as no doubt they later did the disciples; with wonderment!

After telling them it symbolised “my blood of the covenant, which is poured out for many for the forgiveness of sins” he added, “I will not drink again of this fruit of the vine until that day when I drink it new with you in my Father’s kingdom.” [v.26-29]

How soon now – for that wondrous event – it is far beyond our imagining!  Revelation 19 v.7,8 provides us with a vision of this time!  ” Let us rejoice and exult and give him the glory, for the marriage of the Lamb has come, and his Bride has made herself ready; it was granted her to clothe herself with fine linen, bright and pure” adding,  “for the fine linen is the righteous deeds of the saints.”

Food for our deepest meditation here! Can we visualize this marriage supper? Are we, under our Lord’s guiding hand, clothing ourselves “with fine linen”?

How far beyond our ability to imagine this time (and how soon now?) when “the marriage of the Lamb” takes place when we, with his disciples, “drink again … in my Father’s kingdom” in “that day.”  We cannot help repeating the question – how soon now?

How tragic for those who declare, as Peter declared just before the rooster crowed, “I know not the man!” [today’s chapter v.74]

Do we “know” him?  If we say ‘Yes’ surely it means we are claiming to have a genuine relationship with him – every day!  Peter went on to really “know” him: read the opening verses of his epistles!