Daily Readings & Thought for July 26th. “IS THIS NOT BATHSHEBA?” 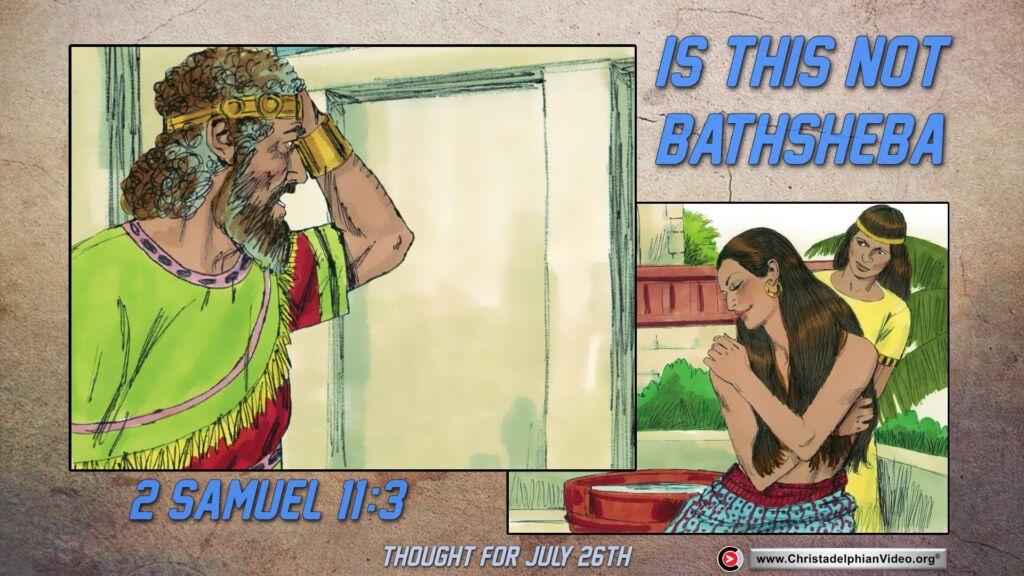 Today’s readings bring us to that very sad and disturbing account of David’s adultery with Bathsheba and then organising the death of her husband Uriah.  He asked who she was and was plainly told “Is this not Bathsheba … the wife of Uriah” [2 Sam.11 v.3]. How could David have been so blind to commit such a dreadful sin – two sins really – murder to try to cover up the first.  Let’s think about the situation.

When someone has total power and is answerable to no other human, then there is always the potential to misuse that power – especially given our nature as human beings, to blindly do things which are morally wrong.

David had by this stage achieved in his life everything that was humanly possible, except that he was not permitted to fulfil his dream of building a magnificent temple to his God. It is clear he had a very energetic mind; he set to assembling much of the material that would be needed in building the temple.

But there was a strange lull in his activity at this particular time.  Today’s chapter indicates that when winter is over it was customary for “kings to go out to battle” [v.1], the purpose would be to reassert their control over their dominions; yet this time, for some reason, David decided not to go but “remained in Jerusalem” and “sent Joab and his servants with him and all Israel” [v.1].

This has a lesson for us, it is never time for us to take life easy when there is work in the service of our Lord to be done.  The Lord has given us, if we are truly his servants, different talents, abilities and opportunities and when we shirk using these, could we in a sense start thinking, “my Lord delays his coming”.

This line of thought would give opportunity for distractions and attractions to lodge in our minds and we stumble from “the straight and narrow way.”

We have just read in Matthew about the servant who said, “My Master is delayed … and eats and drinks with the drunkards” [Ch. 24 v.48,49] and ended up “in that place where there will be weeping and gnashing of teeth.”[v.51]

But the Lord “put away” David’s sin because he had already proved himself an exceptional servant, he nevertheless suffered the consequences for the rest of his life.  It is also remarkable how, “for those who love God all things work together for good, for those who are called according to his purpose.” [see Romans 8 v.28]  This is for the “good” of God’s purpose!

And what was the outcome “for good” in David’s case? It caused David to write some of his most passionate Psalms about sin – ponder Psalms 6, 38, 90 v.7,8 &c.  But the lesson for us is plain, there  is never time to ‘take time off’ when there is work for the Lord to be done.

“COUNTED … TO HIM FOR RIGHTEOUSNESS” – Thoughts from today’s Bible readings – Jan. 12th

“THE LORD IS MY SHEPHERD” Thoughts from today’s Bible readings – Jan. 11th

“MY GOD, WHY HAVE YOU FORSAKEN ME” Thoughts from today’s Bible readings – Jan. 10th

“WISDOM IS JUSTIFIED BY HER DEEDS” Thoughts from today’s Bible readings – Jan. 9th