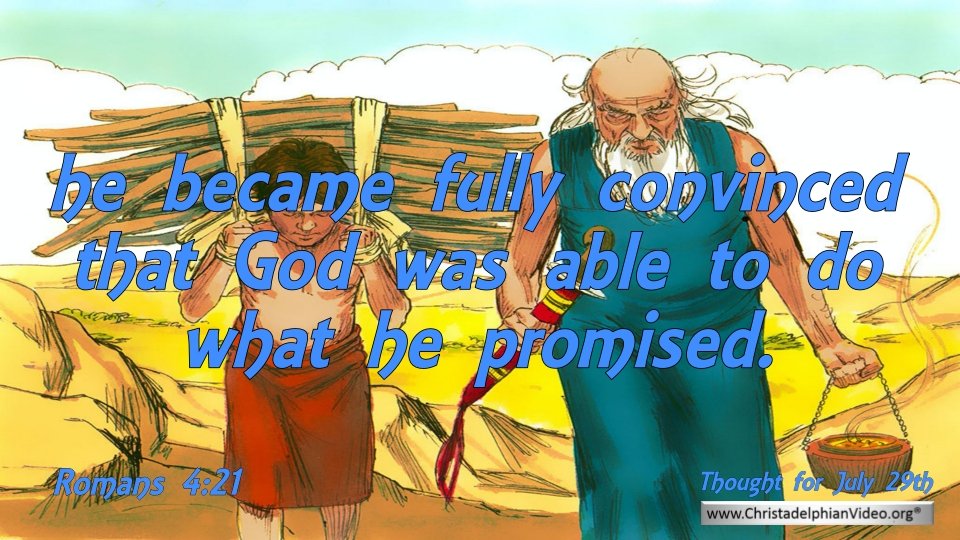 The lives of all who commit themselves to serve God travel along their own particular paths. Paul in his letter to the Romans, we read today, reflects on the life of Abraham as “he grew strong in faith” and how he became “fully convinced that God was able to do what he promised.” [Ch. 4 v.20.21]

Abraham’s faith went from strength to strength, he believed from his heart what God said. Paul says, “He did not weaken in faith when he considered his own body which was as good as dead (he was now about a hundred years old) or when he considered the barrenness of Sarah’s womb. No distrust made him waver … “ [v.19,20]

Now compare David’s situation with Abraham. David was despondent, he had climbed the pinnacles of faith but then his thinking and resultant behaviour had hit a blind spot after his actions with Bathsheba. God’s words bore heavily on his mind, “because you have despised me … I will raise up evil against you out of your own house” [2 Sam. 12 v.10,11] It is clear David experienced deep depression, he ceased to be actively involved in administering justice and Absalom, as we read today in Ch. 15, took advantage of this.

David was overwhelmed by events, his faith had lost its focus, but, in his inner being he knew all was in the hands of God and he clung to that conviction. We read today how he flees from Jerusalem, saying, “If I find favour in the eyes of the LORD, he will bring me back.” [v.25].

It is a contrast in some ways to Abraham who grew stronger in his advancing years. Jeremiah’s challenges are different again. Today we read how he is told by God, “Behold I am bringing such disaster on this place that the ears of everyone who hears of it will tingle.” [Ch. 19 v.3]

In this 21st Century we have more in common with Jeremiah than with Abraham and David. Jeremiah was to be in the midst of the disaster, brought by God because of the people’s total ungodliness – and he survived it. .

In coming days we will read how God reveals warnings to Jeremiah about “the latter days.”.(Ch.23 v.20; 30 v.24). If we really meditate on these warnings they will cause us to think of the greater challenges our own journey in faith is going to face as our world is overwhelmed by God’s judgements – these challenges may be quite near so let us become “fully convinced that God (is) able to do what he promised” and make sure ‘we are on the Lord’s side.’