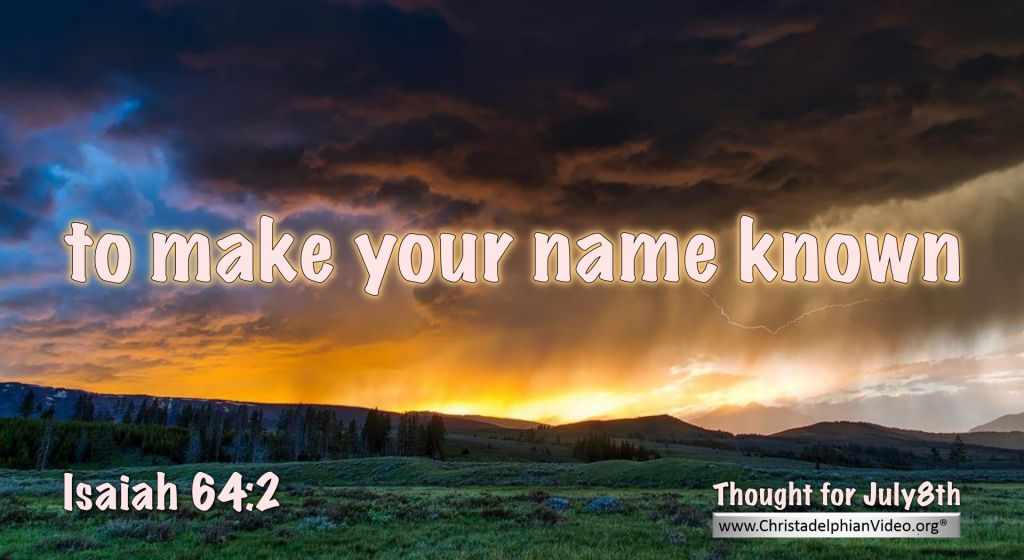 Our Isaiah chapter (64) starts with a plea – a prayer – to our Creator.  “Oh that you would rend the heavens and come down, that the mountains might quake at your presence … to make your name known … that the nations might tremble at your presence!” [v.1,2]  That appeal to the Creator, is one true believers should be making now, today, more than ever.  So few believe there is a Creator.

Isaiah’s plea to God “to make your name known” reminds us of when he did this in delivering his nation from slavery in Egypt: it was that act that established his name, that is, his reputation!  We saw this in yesterday’s chapter 63 which described how God ” caused his glorious arm to go at the right hand of Moses, who divided the waters before them to make for himself an everlasting name … So you led your people, to make for yourself a glorious name” [v.12,14]

But the chapter ends on a sad note, that in the prophet’s days, Israel had ” become like those over whom you have never ruled, like those who are not called by your name.”

Are we in danger of becoming like those who never knew Christ, never had a relationship with him? We need to take special note of the message in v.5 of today’s chapter in Isaiah, “You meet him who joyfully works righteousness, those who remember you in your ways.”

In some ways this point is to be found within the challenging teaching of Jesus we are reading in Matthew.  The religious leaders were self-righteous, they did not “joyfully work righteousness.”  Their pride was in keeping the letter of the law with all the embellishments they had added to it, this meant they were not making God’s name known” – but instead – their own!  As a result they did not recognise who Jesus was, they derided his association “with tax collectors and sinners” He responded, ” Go and learn what this means, ‘I desire mercy, and not sacrifice.’ For I came not to call the righteous, but sinners.” [ch. 9 v.13]

We all need the mercy of God – and to show mercy to others.  In this way we make our Saviours’ “name known.”  We witness by our actions as much as by our words as we seek “to make the name” of Christ “known” as the ingathering of God’s harvest is being completed – and then the nations will tremble in awe “at your presence” through the return of His Son in wondrous power.

Daily Readings and Thought for September 23rd. “BUT GOD KNOWS YOURS HEARTS”