Daily Readings & Thought for May 4th. “LOOK YOU SCOFFERS, BE ASTOUNDED AND PERISH” 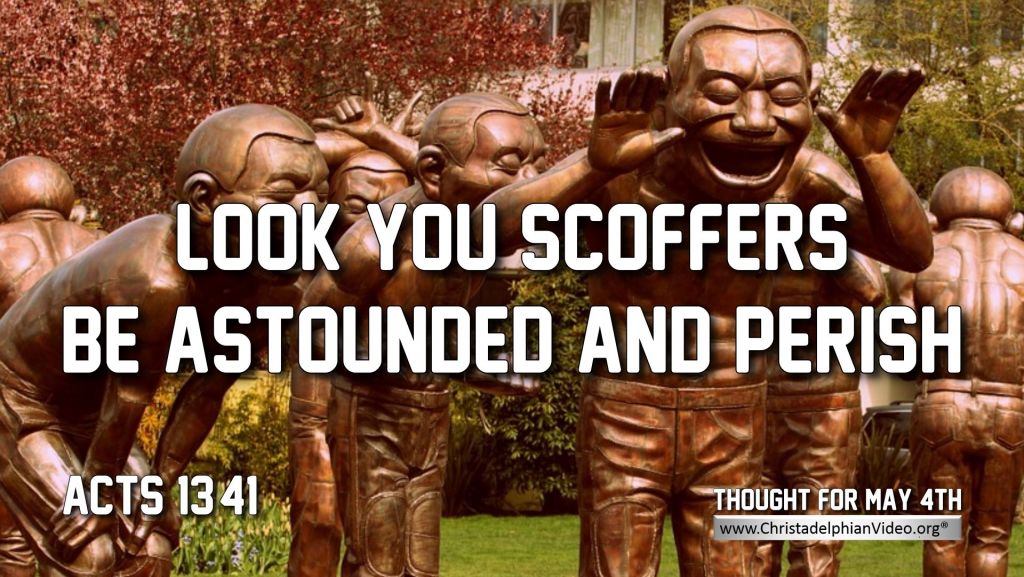 The dramatic death of Herod we read about today gives us an unexpected lesson.  It took place after Peter had been miraculously released from prison after his arrest by Herod.  Chapter 12 of Acts starts by telling us, “ …Herod the king laid violent hands on some who belonged to the church..  He killed James the brother of John with the sword, and when he saw that it pleased the Jews, he proceeded to arrest Peter …”

Jesus had said troubles like this would happen (see Matt 10 v.17,18).  Our chapter tells us of Peter’s miraculous release as the soldiers guarding him were caused to fall fast asleep and the chains fell off his hands.  Herod obviously refuses to acknowledge any miracle has occurred and has all the sentries put to death. (v.19).

It is after this that he goes to Tyre and Sidon “put on his royal robes … and delivered an oration to them.  And the people were shouting, ‘The voice of a god, and not a man!’  Immediately and angel of the Lord struck him down, because he did not give God the glory …” [v.22,23]

In contrast to the demise of Herod, we then read “But the word of God  increased and multiplied.”   And how it multiplied!  It spread and spread until in the 3rd Century it was the official religion of the Roman Empire, but sadly, that also brought the time when the ‘glory’ of the preachers became pre-eminent – and they also taught what the people wanted to hear and the original gospel faded into the background.

The final words in Ecclesiastes we also read are a fitting conclusion to our thoughts. “… all has been heard.  Fear God and keep his commandments, for this is the whole duty of Man. For God will bring every deed into judgment,  with every secret thing, whether good or evil.”

No posts found.
More Like This
Send Link Via Email