Daily Readings & Thought for November 4th. “THROUGH MANY TRIBULATIONS” 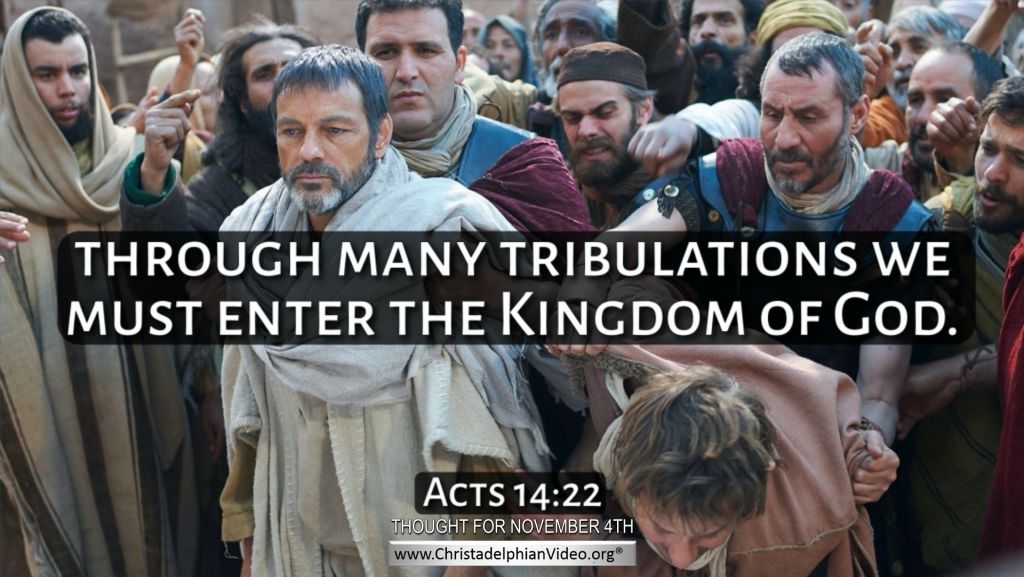 How heart stirring are the accounts we have in the book of Acts of the ways in which the Gospel was spread, and the opposition it faced and overcame so that “a great number of both Jews and Greeks believed.” [14 v.1]

But those who did not believe stirred up opposition – and it has been so ever since!   The nature of the opposition has changed from time to time – but today, the opposition is – complete indifference, the message of the God of the Bible is almost completely ignored – and is some ways this is the hardest opposition to contend against.

At Lystra Paul appears to have been stoned to death, and they “dragged him out of the city supposing that he was dead.” [v.19]  Wonderfully, “when the disciples gathered about him, he rose up and entered the city.”  We reflect on Paul’s summary of his many afflictions we read in 2nd Cor. 11 v.23-28 which ends with the comment that “apart from other things there is the daily pressure on me of my anxiety for all the churches.”   Today, as news travels so fast, if we are really committed to the work of Christ we will experience similar anxieties as we hear of the plight of genuine believers in countries such as Iran and Ukraine.

So we read that Paul and Barnabas made their way back to Antioch “strengthening the souls of the disciples, encouraging them to continue in the faith, and saying that through many tribulations we must enter the kingdom of God.” [v.22]

We ourselves ponder the final time of tribulations that may await us  as we see our world in increasing turmoil and remember the words of Jesus, “there will be such tribulation as has not been from the beginning of the creation that God created until now, and never will be.   And if the Lord had not cut short the days, no human being would be saved. But for the sake of the elect, whom he chose, he shortened the days… after that tribulation, the sun will be darkened, and the moon will not give its light,  and the stars will be falling from heaven, and the powers in the heavens will be shaken. And then they will see the Son of Man coming in clouds with great power and glory.  And then he will send out the angels and gather his elect …” [Mark 13 v.19,20,24-27]

Let us try our best to develop the strength of faith we are reading about in the Acts as we know not how “many tribulations” await us as the time of the kingdom comes ever closer, remembering that Jesus said, “the one who endures to the end will be saved.” [Mark 13 v.13] 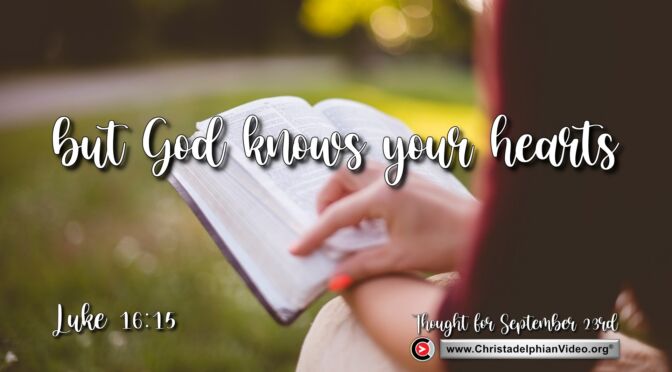 Daily Readings and Thought for September 23rd. “BUT GOD KNOWS YOURS HEARTS”