Daily Readings & Thought for October 10th. “IN THE BEGINNING WAS THE WORD” 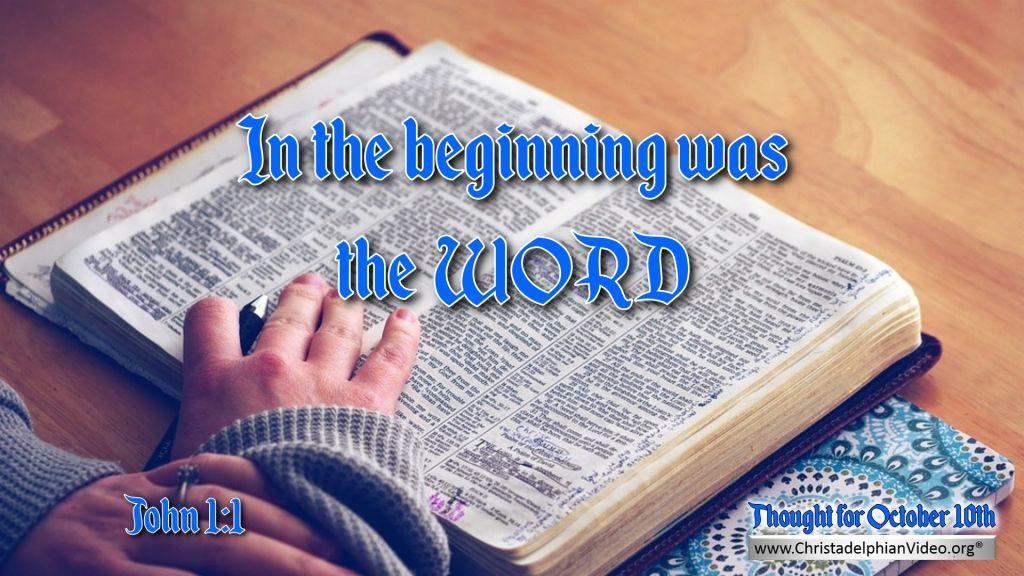 Today we start reading the Gospel of John, which is one of the most challenging books of the Bible to fully understand. But the Bible would soon lose our continuing interest if its meaning was immediately plain as we read it.  Often we have to think carefully about what we read to get to unfold the fullness of its meaning.  This is God’s wisdom in causing it to be written the way it is.

The problem is made greater in a few cases because the translators have had a fixed idea in their minds as to its meaning.   John’s Gospel begins by using the word WORD.  “In the beginning was the WORD”  In the Greek this is the word logos. It is sometimes translated as saying [eg John 4 v.47,49] and the lexicon says it primarily means ‘spoken word’   Genesis 1 is all about what God said to create life on earth.  Then under the leadership of Moses, all that the people heard in the wilderness was God’s ‘voice’ from the top of the mountain.  God was known by his WORD, no one saw God he was ‘known’ to exist  because of his voice and actions.

The translators confuse us in John 1 when they start to use the word “Him” as a pronoun for ‘Word.’   The earliest translations (Tyndale) use the word “it.”  The best way to make sure we get the right understanding is to use the noun instead of the pronoun –  then you read -. “All things were made through a word, and without a word was not anything made that was made” [v.3] This then fits in with the way God revealed himself to Moses and the people who came out of Egypt..

But there is a greater meaning to be found, a spiritual meaning – it is this: the words of Jesus had the power to bring eternal life to those that accepted them.  The Jews [v.11] did not accept his words “But to all who did receive him, who believed his name, he gave the right to become ‘children of God’ [v.12]

Do we want to become children of God?   Or just live and die as animal beings so that in the end we are no better than an animal?  Very few had access to the written word in and after the time of Jesus, yet “in the beginning” when the gospel began to be preached and spread forth in the days of the apostles, the good news “the word” revealed was eagerly embraced – but today!  How few are thrilled at words such as in Psalm 119 (v.105) “Your word is a lamp unto my feet and a light to my path”   May that be true of you.