Daily Readings & Thought for October 17th. “THIS SHALL BE THEIR INHERITANCE” 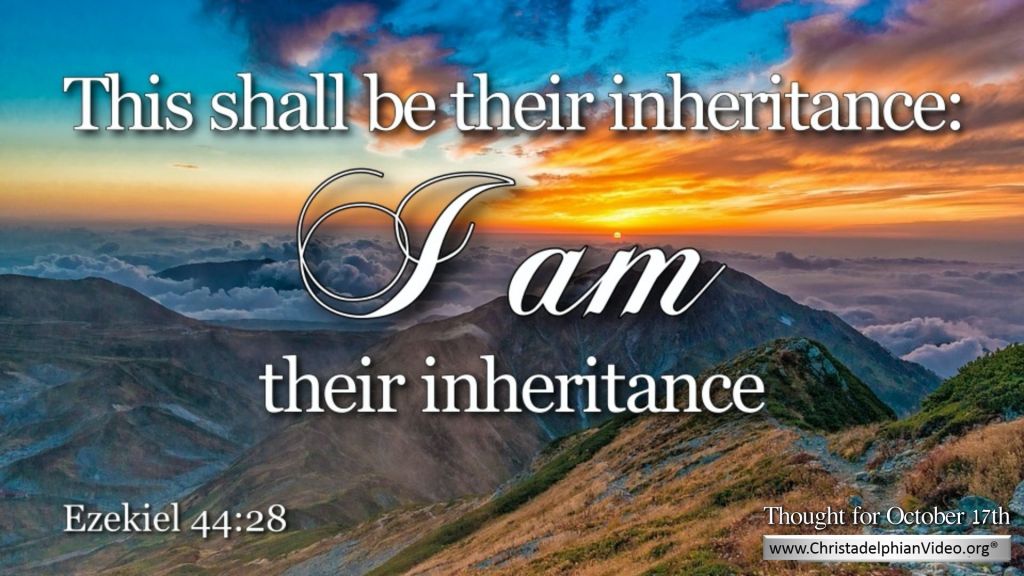 Ears prick up where there is thought of an inheritance.  Solomon had very great wealth, as we read today (2 Chron. 9).  He obviously left a very great inheritance.  But we will read tomorrow how it largely came to nothing because of the foolishness of his son because he failed to seek the wisdom of God, as his father had done, to wisely rule the nation in service before God.

In Ezekiel we are reading how God gave the prophet the vision of a great temple.  He gave him intricate details about this temple. It is most interesting to note how long it was that the prophet had to wait to receive this vision. Taken into captivity 11 years before Jerusalem was destroyed he had spent that period in warning the exiles that their hopes to return from exile were futile.  Why?

The spiritual immorality in Jerusalem was only getting worse. The leaders there were abusing the use of the temple Solomon had built.  They had totally lost the vision of the true God.

Ten days ago in Ezekiel 33 (v.21) we read how they received the tragic news of the destruction of Jerusalem and the Temple.  The next date we have was at the beginning of Ch. 40 where we learnt that over 13 years more have now passed since that tragedy.

Probably in this period Ezekiel received the messages about the future recorded up to the end of Ch. 39. Now, “in visions of God” [40 v.2] he is brought  to Israel and “he set me down on a very high mountain” and is told “set your heart on all that I shall show you … declare all that you see to the house of Israel” [v.4].

This vision of a future glorious temple was written down in great detail to inspire these exiles; a vision to give them purpose to overcome their sense of hopelessness. However, what struck us as we read today’s chapter (44) was the blessing on the priests “the sons of Zadok” who had not gone astray, but “who kept the charge of my sanctuary” [v.15].  Note the words carefully, “This shall be their inheritance: I am their inheritance … I am their possession” [v.28] is what God says.

That is the ultimate inheritance, not gold or silver, but to belong to God, to “be equal unto the angels”,[Luke 20 v.36] The opening paragraph of the book of Revelation ends by stating Jesus has “ made us a kingdom, priests to his God and Father, to him be glory and dominion forever and ever. Amen.” [1 v.5]

May we all be vitally interested in this kind of inheritance!   What a contrast to what this world offers today.