Daily Readings & Thought for October 19th. “I DID NOT COME TO JUDGE” 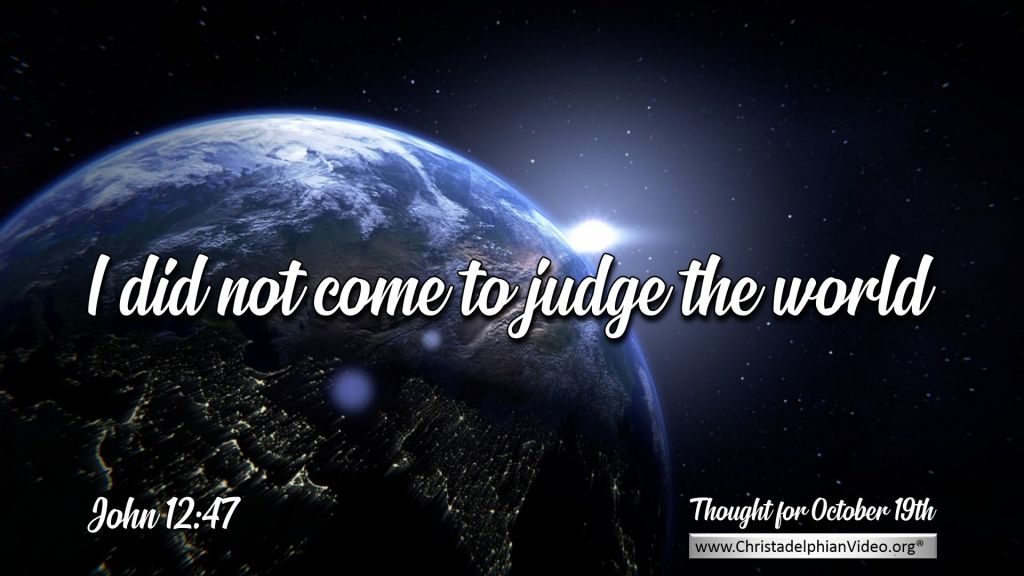 John’s Gospel begins [1 v.4-9] by saying Jesus is “the true light which enlightens everyone” and John the Baptist was “bearing witness to that light”   It is not too difficult to understand that.

Now, in today’s reading [Ch.12] as our Lord’s ministry is reaching its climax, he speaks some more about light and darkness; “I have come into the world as light” he says, “so that whoever believes in me may not walk in darkness” [v.46].  The light had been shining with increasing brilliance through his words and works, climaxing in yesterday’s account of the resurrection of Lazarus.

Yet, such is the tragedy of blindness of this nature and the extremes this can provoke in their actions, we now read of some who are even more determined to get rid of Jesus. He is a threat to their prestige and authority. [11 v.47-48] In today’s chapter those with this spirit of mind even “made plans to put Lazarus to death as well, because on account of him many of the Jews were believing …” [v.11]  Their blindness, despite the brilliance of the “light” had become extreme.

There is no half way position in God’s eyes, either you believe or you don’t!  Those who genuinely believe live and act in ways which make this obvious. God expects this.  Some of those choosing darkness certainly did something to show this – and persuaded others to support them and to cry, “Crucify him.”

What did Jesus mean when he said,, “I did not come to judge the world, but to save the world” [v.47] Because Jesus did not come as a condemning judge,  those persuaded to support those in darkness and cry ‘Crucify him’ –  were later able to repent [Acts 2 v.37-38], it is the outstanding example of Divine grace!

“IN THE BEGINNING WAS THE WORD” – Thoughts from today’s Bible readings – Oct. 10th

“OUR CITIZENSHIP IS IN HEAVEN” Thoughts from today’s Bible readings – Oct. 9th