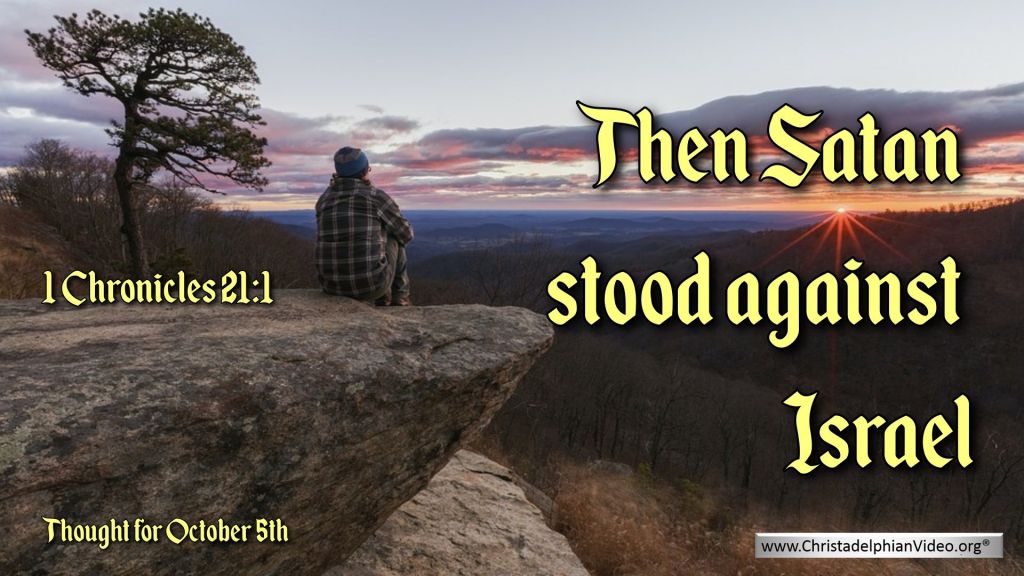 After reading today’s 4 chapters we felt we could write a book about all the challenging points of interest in them. Ch. 21 in 1 Chron starts,  “Then Satan stood against Israel and incited David to number Israel.”  The parallel passage in 2 Sam 24 makes no mention of a “satan.” Remarkably it says, “the anger of the LORD was kindled against Israel and he incited David …” !  Our conclusion is that he allowed David’s own mind to have its way because he had reason to discipline Israel – and also teach David a lesson.

In our chapter today David admits, “I have sinned greatly in that I have done this thing” [v.8]  We can see that ‘satan’ is a figure of speech that is often used in scripture to describe an adverse attitude of mind, one that swamps our efforts at good thinking. Satan is the Hebrew word ‘satanas’ and it first occurs in Numbers 22 v.22 and again in v.32 to describe, (as translated in the A V) how an angel God sent stood in the way to be an ‘adversary’ to ‘withstand’ Balaam, a bad prophet.  It is not easy to get our minds around this phraseology of Scripture, but God’s angel was a ‘satan.’.

We read last month in 2 Cor. 12 v.7-10 that Paul realised that God – to “keep” him “from being too elated by the surpassing greatness of the revelations (he hand experienced)  a thorn was given me in the flesh’, says Paul,,” a messenger of Satan to harass me, to keep me from being too elated.”  The paradox is Paul’s conclusion in v.9, 10, “For the sake of Christ, then, I am content with weaknesses … for when I am weak, then I am strong.”   This means, strong in the ways that matter, in one’s working with and reliance upon God, and, as a result appreciating such ”thorns” that cause this.

In our Ephesians reading Paul tells them how ”you once walked, following the course of this world, the prince of the power of the air, the spirit that is now at work among the sons of disobedience – among whom we all once lived in the passions of our flesh, carrying out the desires of the body and mind … like the rest of mankind.” [ch. 2 v.2,3]

Taking the passage as a whole we can see that our “desires of the body (flesh – Footnote) and mind do not mean we are controlled or influenced by some evil spirit power – like puppets on a string – but that our lives present us with two options – to remain “dead “ (v.5) to being influenced by the ways of God, becoming more and more self-centred instead of Christ-centred –  or to be “made … alive together with Christ (who) … raised us up with him and seated us with him in the heavenly places in Christ, so that in the coming ages he might show the immeasurable riches of his grace in kindness toward us in Christ Jesus.” [v.6-7]  Are you succeeding in living in “heavenly” places?

So again we have the broad and narrow ways – we either walk on our own, stumbling along the broad way (or rushing along it!) – or – by feeding diligently on God’s word – we increasingly show “we are his workmanship, created in Christ Jesus for good works which God prepared beforehand, that we should walk in them” [v.10]